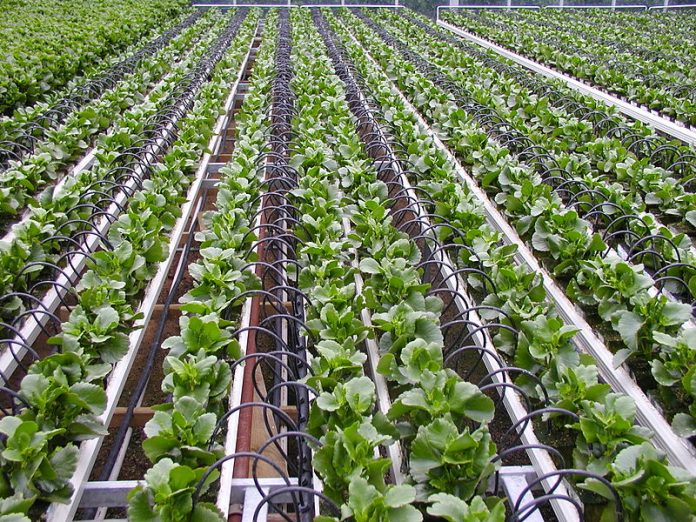 The Ramthal community drip irrigation project in Karnataka was bagged by Netafim and Jain Irrigation and was commissioned in 2017. Pic: Button dripper/Wikipedia

Israel’s Netafim is a pioneer in drip and sprinkler or micro-irrigation systems, though, in India, Jalgaon-based Jain Irrigation has the lead. Governments provide micro-irrigation installations practically free to farmers (those with fewer than five acres). In Karnataka, they get a subsidy of 90 per cent, shared by the Centre and the State.

Micro-irrigation companies have driven their business by installing the equipment first and then collecting the subsidy from the government on behalf of farmers. Some stretched themselves so much they got into a working capital crunch. A few years ago, the government disallowed private banks and non-banking institutions to finance subsidised micro-irrigations systems. Leaving it to NBFCs like Netafim’s NAFA to do business with  farmers who remain convinced that micro-irrigation will reduce their cost and enhance profits that they are prepared to bear the entire cost. These are mostly horticulture farmers or those who have assured buyback of their produce.

For cane farmers in Maharashtra, sugar mills stand guarantee. They pay lenders from the cane receivables of farmers, who, consequently, don’t have to offer their land as collateral. Maharashtra, which is water-scarce, has made micro-irrigation mandatory for cane farms.

The government has been promoting micro-irrigation though the ‘Per Drop More Crop’ scheme. This year, ₹4,000 crore was allocated for this scheme in the budget. Last year, the same amount was allocated but spending was ₹2,500 crore. Chaturvedi pointed out that if private banks and non-banking institutions were allowed to lend for subsidised micro-irrigation installations, the outcome would have been better. (But lenders had turned risk-averse last year, as farmers were unable to sell their produce due to COVID-19 restrictions. Chaturvedi too admitted to an increase in micro-irrigation loan defaults in his own company).

Micro-irrigation installations used to be promoted with one or a few farmers at a time. That’s inefficient and time-consuming. Karnataka, which is one of the pioneers of micro-irrigation, began using this system in 1991-92. Till November 2020, it had covered 7.16 lakh hectares. Community-based combined lift and drip irrigation projects can cover wide swathes of land and make scarce water available to a large number of farmers in a short time. Since governments pay most of the capital cost, it makes economic sense as well.

Karnataka is implementing six such projects. The one across the River Krishna in Bagalkot district’s Hungund taluk is touted as the world’s largest. It covers 60,000 acres and 14,000 farmers across 22 villages. The Ramthal project was awarded to Netafim and Jain Irrigation and was commissioned in 2017.

The videos uploaded on Youtube by the two companies claim huge savings in water, fertiliser and energy and substantial increase in crop yields. They speak glowingly of farmers prospering by growing cash crops and preferring to stay back rather than migrating to cities.

A note on the project uploaded on the website of the Water Resources Ministry said though it costs ₹750 crore – 25 per cent more than a comparable and conventional canal irrigation scheme, there is a 90 per cent increase in area irrigated. The cost per hectare is ₹3.13 crore versus ₹2.5 crore in a conventional project.

There are environmental benefits too: there is no water logging or increase in salinity and less wastage of land to canals and distributaries. Since there is pressured supply, water is evenly distributed across fields and within fields ensuring uniform plant growth and yields. Dissolved fertilisers are conveyed directly to the root zone. A decrease in humidity means a lower incidence of pests and diseases and the growth of malarial mosquitoes.

The entire irrigation project is a closed-loop system. Water is lifted from a reservoir and pumped into a sump and filtered for silt and debris. It is wireless controlled with instrumentation that regulates supply based on feedback from pressure and flow sensors. The entire area is divided into zones of about 1,200 acres and further into 10 sub-zones each, to which, water is supplied in shifts; the maximum being up to 72 minutes a day at a rate calibrated for kharif and rabi seasons. Water user associations are supposed to collect the maintenance charges – ₹1,000 per acre.

But what’s the ground reality? Ravi Sajjanar, 31, the founder of Hunagunda Horticulture Farmer Producer Company, said he is “very disappointed”. He owns 50 acres and supplies chilly on contract to ITC and Olam. His organisation has 1,000 members, he said, who own 3,640 acres across 18 villages in the footprint area. Some of the farmers have got 40 per cent of the promised supply, he said, some not even that. Farmers who invested in adapting crops to the new irrigation system lost money, he added.

Rafiq Mulla, 40, of Sulebhavi village in Hungund taluk, said he never got ‘proper’ water even once. According to Mulla, who grows pigeon pea (tur) and chilly, the pipelines are broken and not repaired. The trenches that were dug to lay the pipes remain uncovered. Moreover, there is no assured supply in August and September when they most need water.

Abdul Khader Jeelani, 33 and Mahantesh Patil, 45, also of Sulebhavi had the same complaints. “The project is not a success,” Patil declared.

Company executives,  V L Nikam, Jain Irrigation’s VP (Projects) for Karnataka and Girish Deshpande, who look after six projects in Karnataka for Netafim, have their own grievances. They claimed that farmers have not been able to switch their mindset from rainfed irrigation to micro-irrigation. They don’t have the patience to abide by the supply schedules. Some farmers tap the mains illegally to draw extra water, which reduces the pressure in the system and deprives others. There is no ownership because the equipment has been provided free. Even user charges are not collected.

Moreover, the laterals or pipes in the fields are damaged during land preparation for sowing and farmers blame the companies, as they have the responsibility for operations and maintenance for five years. The drip pipes have to be protected from rodents, but farmers don’t follow advice. The companies have reportedly engaged security services at enormous cost to prevent vandalism but it has not helped. Complaints lodged with the police are not acted upon under political pressure.

Farmers are yet to receive compensation from the government for land acquired for the pump house and other common utilities – so they bar access to them. There is enough water in the reservoir, they said, but farmers have to abide by the discipline that community-based projects require to benefit from them. The switch from rain/canal-based flood irrigation to drip irrigation needed a significant mindset change. That has not happened in the Ramthal project in Karnataka.

The executives said they were applying the Ramthal learning to projects under execution. Making farmers aware is critical for project success, they said, adding that they have engaged external agencies like NGOs and government horticulture and agriculture departments. Farmers are being trained in cultivation of profitable cash crops with the appropriate package of agronomic practices.

The Ramthal experience seems similar to India’s programme to end open defecation, in which they realised that the mere construction of toilets on a big scale would not end the practice. What is needed is behavioural change.