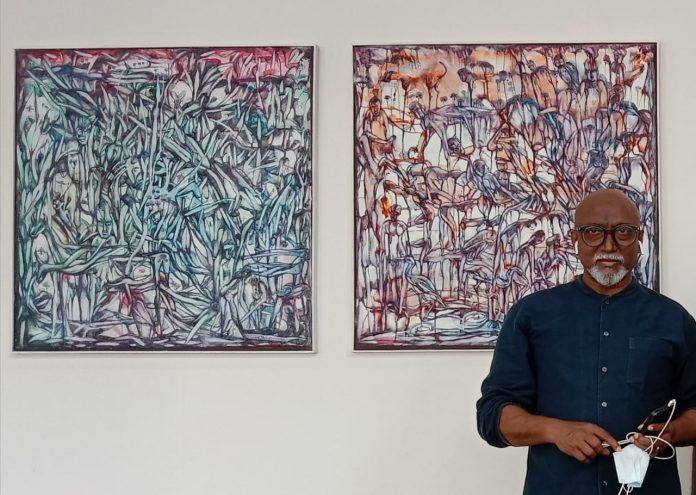 The idea was to encourage the creative spirit of Kerala-born artists during the time of pandemic, says Bose Krishnamachari, an acclaimed artist and curator of 'Lokame Tharavadu'

More than 3,000 art works, 267 artists, six large venues spread over 3 km and a long list of various cultural programmes. That makes up the contemporary art exhibition, ‘Lokame Tharavadu’ (The world is one family), which was flagged off in the picturesque coastal town of Kerala’s Alappuzha on April 18 this year.

The organisers however had to close down the show after a span of 12 days due to pandemic-imposed restrictions. Many thought it was the end of the show, which was organised to encourage artists, particularly new-gen artists and ‘activate the cultural spaces and institutions in Kerala’.

The closure disappointed the organisers, but Bose Krishnamachari, curator of the ‘Lokame Tharavadu’, remained hopeful. He spent time taking care of the thousands of works displayed inside the different venues in Alappuzha, which was a major task considering the scale of the exhibition.

The exhibition, one of south Asia’s biggest, reopened on August 14. Even though visitors have to follow COVID protocols, it has not affected the spirit of the exhibition, organised by the Kochi Biennale Foundation (a non-profit charitable trust engaged in promoting art and culture in India) and the government of Kerala.

The mega art event got a big boost a week ago when the state government extended the exhibition till November 30.

For Bose Krishnamachari, choosing a sleepy town like Alappuzha for the show was a result of destiny, but ‘not god-given destiny’, he says. To narrow down on the perfect location and choosing the artists were laborious. But a team headed by Bose started working on the show in 2020 itself. 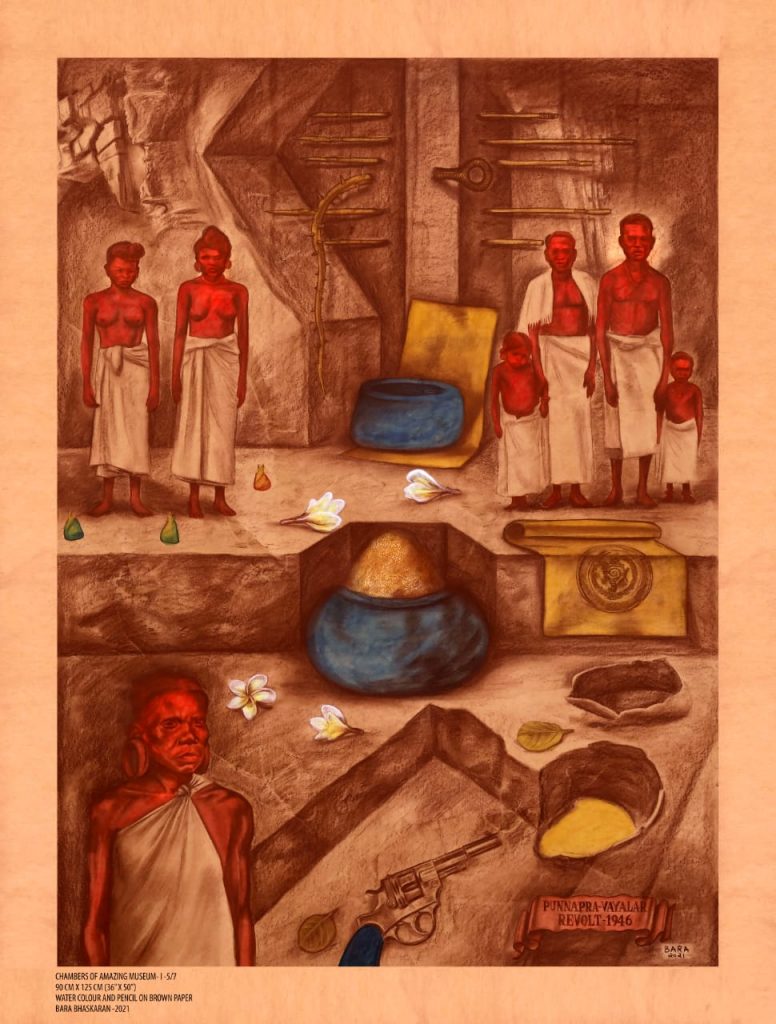 The idea was to encourage the creative spirit of Kerala-born artists during the time of pandemic. “Many artists have been facing various problems since the first lockdown was declared in March, 2020. Even though virtual exhibitions and talks take place regularly, they miss the physical presence, which is important in a medium like art,” observes Bose Krishnamachari.

He chose Alappuzha mainly because it is a heritage city, which is ideal for an art show of this magnitude. Since its inception in 2012, the Kochi-Muziris Biennale has turned Kerala into a global art destination, showcasing the works of artists from Kerala, from other parts of the country and abroad on the same platform.

“Through this show, Alappuzha will become an important global cultural destination focusing on the city’s unique history, water bodies and living traditions,” he says.

Even though Bose has been keenly following the various works of artists through exhibitions and online shows, he travelled across Kerala, from Thiruvananthapuram to Kasargod to personally source art works for the exhibition. Each time Bose visited the studio of an artist, he had to redefine the concept of studio in his mind since the idea of the space an artist works in varies from artist to artist.

“For artists like Asha Nandan, her studio is her kitchen. I have also seen bigger and posh studios like the one maintained by artists like Alex Chandy. At the same time, we have many artists who don’t have a table to sit and work. I wanted a combination of various vibrant thoughts and that’s why I travelled to different places to see each work of these artists,” he points out.

But it was challenging to choose the various works for the exhibition because of their diversity. “There is a great sense of diversity in the works of Malayali artists. I am familiar with the works of many artists outside Kerala and abroad. I have seen the works of some artists via social media. But my travels across Kerala helped me find some brilliant artists in the rural pockets,” says Krishnamchari, adding that they had to accommodate some paintings even at the last moment.

Anil B Krishna says he was shocked when Bose suddenly landed up at his studio while travelling around Kerala trying to source art to showcase in ‘Lokame Tharavadu’.

Krishna recounts, “I was working on a sculpture when he (Bose) came to my house in Thuravoor in Cherthala (near Alappuzha). It was a great surprise. He saw my work, and we spoke about art for a long time and then he asked me to send him some of my works. It was a great encouragement.” Five of his art works are being exhibited at the show.

Sreeja Pallam, another participating artist, has conducted many solo and group shows in and outside Kerala. “This particular art show is important as it gave me a great opportunity to display my work. It is not just my art, many women artists have exhibited their work in this show. I am glad I got the space that my work deserves in this show,” says Sreeja, whose paintings titled ‘The women in the working places’, a collection of 40 paintings in a single frame, is an inquiry into the lives of women in a male-centric society.

Senior artist Bara Bhaskaran’s paintings centre around women who are sidelined and marginalised in Kerala’s historic struggles. In his ‘Chambers of Amazing Museum’ series, he documents the role of women in such struggles.

According to Bara Bhaskaran, as per a census of 1941, the coir industry had 1,33,000 cottage workers, apart from 32,000 ‘coir workers’. A bulk of these workers were women, who toiled hard for low wages, as the world looked for cheaper floor coverings.

“When the martyred men were celebrated as immortal, the role of women who were widowed and had an equal stake in the process of the struggle were never acknowledged. My ‘Amazing Museum’ series is an attempt to visualise this history of oppression, the inequalities and status of women in a revolutionary struggle,” he says.

Bara’s paintings also portray how the bullet-ridden trunks of coconut trees in Punnapra and Vayalar remain both victims and silent witnesses of the tumultuous events of 1946, the year in which the Communist Party of India tried to ‘light sparks throughout a restless land’.

The Punnapra-Vayalar revolt of October, 1946, when hundreds were killed in a police firing at Punnapra, Mararikulam, Vayalar, Olathala and Menassery, is considered a landmark in the history of trade unionism. 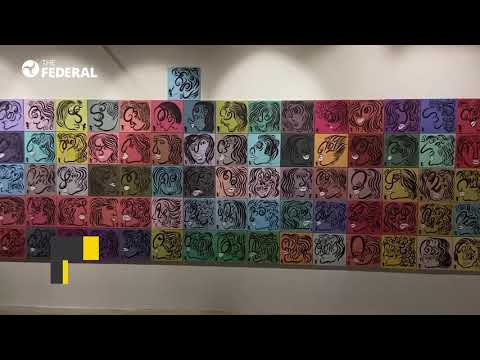 “We have a great miniature art tradition of storytelling. But we see many of our historical struggles through colonial art. Artists are yet to explore the historic events such as uprising and protests. That’s why I chose the historical events of trade unionism and struggles of women in my works,” says Bara, whose seven works are displayed at the Port Museum.

Chennai-based artist Shinod Akkaraparambil says the exhibition has transported him onto a terrain of hope from a state of chaos that he was undergoing due to the pandemic.

“Even though I participated in many virtual exhibitions and talks, I was a bit depressed due to the pandemic imposed restrictions. A show like this gives a lot of hope,” says Shinod, whose 28 miniature (7×7-inch) watercolours titled ‘Of Birth and Rebirth’ document his shift from a nondescript village to a town and then to many metros.

“It is a cycle of birth and rebirth. The figurations, in brown and black, give the feel of mud/soil which I adopt. I am in search of the real soil,” he says.

For young artists like Tito Stanley S J, the exhibition is a great opportunity to showcase their works. “I am grateful to the curator for giving me space for all my 28 works. I have done most of these works during the lockdown, they are on what I saw through my windows. The painting of a dead body is my neighbour who succumbed to COVID-19,” says Tito Stanley, a native of Dhanuvachapuram in Thiruvananthapuram, who is pursuing his Masters of Visual Arts in painting at the Maharaja Sayajirao University of Baroda.

The idea of ‘Lokame Tharavadu’ (The world is one family) is taken from a poem called ‘Ente Gurunathan’ written by veteran Malayalam poet Vallathol Narayana Menon. As the poem appeals to the universal spirit of humanity, Bose thought it was ideal for the title of the show, which showcases contemporary thought-provoking paintings, sculptures, video arts and installations of 267 Malayali artists.

For Bose, the journey never ends. He is happy the show has been extended till November 30. “I am happy but at the same time it’s challenging. I need to work more. I am happy to do that. More people should come to the venues and see the amazing work of all these talented artists,” he says. The exhibition is also an effort to raise important questions for Kerala society as several works focus on the themes of culture, migration, freedom of expression and home.