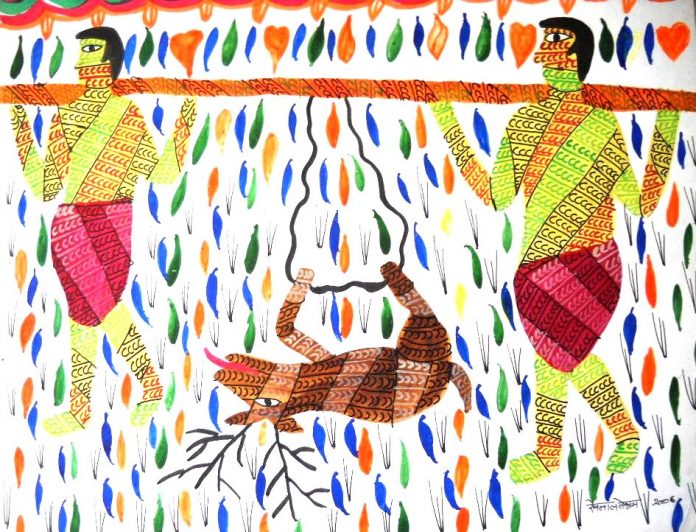 There are around 70 Gond artists associated with the Department of Culture of Madhya Pradesh.

Selling vegetables on Bhopal’s Depot Chouraha with his wife, Gond artist Ram Narayan Singh Maravi always carries a tote bag full of paintings with his brushes and colours. His heart skips a beat every time a customer turns up; fueling his hope of selling one of his paintings.

“I carry this bag…this is my true identity. I must not forget that,” says Maravi.

Maravi and his wife have been forced to sell vegetables for a living in the Madhya Pradesh capital ever since frequent COVID lockdowns in April last year hit his painting sales badly.

“It is very tiring to stand in the sun all day, selling vegetables, for just two-three hundred rupees. It is a question of survival as I have not earned anything as an artist since last year. Sometimes the police also chase us off. On those days, we hardly earn half of what we get normally. This is only enough to buy some food for our children,” he told Covid Response Watch.

After he is done for the day, together with his wife, Maravi continues to make Gond paintings at home with a plan to sell them when the situation gets better. Due to lack of money to buy canvas, they paint on paper instead and have scaled down the size of their art work.

“Before the lockdown last year, we got work from local museums and art lovers who commissioned our work. But as the museum was closed a year and a half back, we have not earned through our art,” said Indu Bai, Maravi’s wife, also an artist.

Maravi started painting in 2004 when his wife taught him how to make Gond paintings and since then their livelihood has depended on selling paintings in exhibitions and tribal festivals. One of India’s largest and oldest tribes, found mostly in central parts of the country, the Gonds, is well known for their vibrant artworks, through which they tell their traditional mythical stories.

“My wife learnt the art from her parents as they used to paint on the walls of their homes during festivals. They made ‘digna’ narrating the stories of their Gods through their wall paintings. We started making the same patterns on paper and canvas and turned it into our profession, following in the footsteps into Jangarh Singh Shyam and Bhajju Shyam,” he said.

Both Jangarh and Bhajju were pioneering Gond artists from Patangarh in Dindori district of Madhya Pradesh whose work won acclaim around the world. Jangarh was one of the first Gond artists to use acrylic on paper and canvas and is credited with creating a new school of Indian contemporary art called the ‘Jangarh Kalam.’

Most Gond artists in Bhopal are also from Patangarh, who have turned to art for a living. Though earlier generations from the area depended upon agriculture, collecting and selling forest produce, over the last two decades, the younger generation, has migrated to cities in search of a better life.

There are around 70 Gond artists associated with the Department of Culture of Madhya Pradesh. Many of them lost their only source of livelihood during the pandemic and are struggling to get back on their feet and are trying to find ways to reach art connoisseurs and lovers.

One of them is Balmati Tikam, who lives with her husband and children in a slum area of Bhopal. She decided to exhibit her paintings by the roadside as she had no money to even buy groceries leave alone pay the rent for her one-room tenement.

“The landlord says I should at least pay him the rent for a month else he will have to give the room to someone else. I do not have money to buy food for my children, how can I pay rent?

“We keep sitting under the scorching sun with our paintings for hours on end, but have had no luck,” she said.

Santoshi Shyam, another Gond artist from Patangarh, also faced a lot of difficulties during the lockdown as she had to dip into her savings to buy food and medicines ever since the pandemic hit the country. After her savings were exhausted, she had to rely on the local NGOs to provide her with groceries.

“My eight-year-old son is handicapped and needs regular therapy and medicines. We had to borrow money from our friends as we did not have enough to afford his medicines,” said Shyam.

“I had saved up some money from the exhibitions where I sold my paintings, but now my bank account is empty,” she said. Before COVID struck, typically the Gond artists made around ₹ 10-30000 by selling their paintings at each art exhibition or workshop and going to 12-15 such events every year was enough to provide for their families. The pandemic has led to the shutting down of all social events and public gatherings since April 2020.

“There are 12 members in my family, and all of us are artists, so when the pandemic struck, all of a sudden we found ourselves out of work. We had to spend the money that we were saving, like for our children’s education, marriage, and groceries. Now we have to start saving all over again,” said Ravi Kumar Tikam, from Patangarh, Dhindori.

Many artists decided to keep making paintings to increase their stock, to be ready for an exhibition as soon as one begins. They now hope that their work doesn’t go waste.

In the meanwhile, some social workers have made a special effort to help out the struggling Gond artists.

“When I asked Balmati why she was sitting on the roadside trying to sell her paintings, she told me her plight. So I decided to share the photos of her paintings on social media and asked my friends to find buyers for them,” said Pooja Iyengar, founder of Mahashakti, an NGO for women’s empowerment. Iyengar’s post reached a lot of people and she was able to raise ₹ 35,000 for the artist.

An art workshop ‘Chitra-Shivir’, organised by the Tribal Museum of Bhopal from July 7-11, also offered some relief and monetary support to around 62 artists from all over the state. The artists made one painting each for the museum and got ₹ 7,500 for it.

“Last year also we had provided financial aid to performing artistes by streaming their videos, shot by them through their mobile phones, on our YouTube channel,” said Ashok Mishra, curator at the Tribal Museum.

Participating in the workshop at Tribal Museum in Bhopal, Santoshi was happy to have received the ₹ 7,500 cheque, after almost 15 long months.

“This is my first income in two years. I am happy as this will help me pay my rent and get medicines for my son,” she said, touching the cheque to her forehead and closing her eyes in gratitude.

Iran shuts out noise at World Cup but United ...