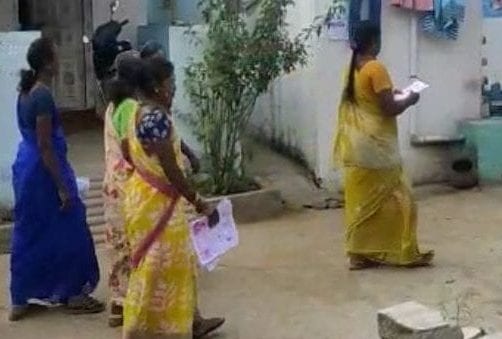 To bring about a change in society, the enactment of laws or the Supreme Court’s fiat alone will not suffice. There has to be an attitudinal change. This can be best seen in the resistance encountered by Dalit women, who for the first time are being allowed to contest in 50 per cent of the seats meant for local bodies in Tamil Nadu. The patriarchal mindset too is evident as even those who don’t face any resistance had to seek the concurrence of or be egged on by their husbands to enter the fray.

When Kalyani, aged 46, decided to throw her hat into the ring, little did she realise that she would be made to run from pillar to post to get her nomination accepted by the authorities.

Not only did she face opposition from the system but also from her husband who initially wanted her to withdraw from the contest.

Speaking to The Federal, Kalyani said, “I went to file my nomination at 9 am on December 15. But officials kept insisting that I need to bring one document or another. They even asserted that the area in which I live didn’t fall under the jurisdiction meant for Scheduled Caste women. And after much hullabaloo, my papers were accepted at 3 pm.”

She even alleged that the caste Hindus threatened the voters, not to choose her as their representative, after she completed the campaign trail for the day.

Also read: Dalits vs Dalits: How caste walls are getting new narratives

A daily wager, and a resident of the Pongalur union in Tirupur district, Kalyani dropped out of school after her VIIIth standard. With no degree and a proper job, her dream of making both ends meet could be realised only with the help of a woman self-help group.

The main grouse of Dalits has always been securing patta (land deed) for the lands on which their houses are located. Having worked in the houses of caste Hindus and having played a key role in fighting for the rights of her fellow beings in their struggle to get pattas, Kalyani understood the social conditions which she wanted to transform. Therefore, when an opportunity beckoned her, in the form of local body elections, she grabbed it.

While women like Kalyani are contesting the election braving many odds, many others have entered the race at the instance of their husbands.

Selvi, a first timer from Dharmapuri district, is a contestant for the panchayat union councillor post.

“Ours is one of the eight districts that come in the way of the proposed Chennai-Salem eight-lane expressway. I too took part in the protests against the project. As I wanted to help develop my village, I made up my mind to contest after consulting my husband,” said Selvi, a Class X dropout.

Rekha, a housewife from Namakkal district, contesting for the post of the district union councillor said that she took an interest in politics after observing her husband’s social service activities, namely, tree planting, helping poor students besides assisting orphanages.

“If I emerge victorious, the first thing I would do is to provide drinking water facilities all over the district. Though I have always been interested in public service, it is because of my husband’s constant prodding that I decided to contest,” said Rekha, a diploma holder in electrical and communication engineering.

In Koolamedu village of Salem district, Vellaiammal, a 70-year-old woman, has already been elected unopposed as panchayat president. Out of the three nominations, one got rejected and the second contestant withdrew from the contest.

It is all about gender and not about caste as women of all castes act as per the dictates of their husbands, says Nandakumar Shiva, general secretary, Thannaatchi, an organisation working towards Panchayat Raj awareness.

“Many of the women, contesting for the first time, have better ideas and solutions to the problems of their constituencies. But due to lack of communication skills, they are unable to express it during their campaigns and while interacting with the media,” he said.

Of the 1,19,393 vacancies for the posts of panchayat presidents, ward members, panchayat union councillors and district union councillors in the state, 62,873 women are in the fray. In 2011, women of all categories contested for 40,064 posts. This time, there has been an increase of 22,809 posts. Panchayat polls are scheduled to be held as per the 2011 census on December 27 and 30.

In the case of ward members in village panchayats, about 16,550 wards have been assigned to women of SC/ST communities and 36,179 allocated to women of general category.

For the posts of panchayat union councillors, SC/ST women have been given 881 wards to contest and women from general category have been alloted 2,456 wards.