In a politically multi-polar country like India, which opted for the imperfect ‘first-past-the-post’ electoral system, coalitions are essential to ensure more representative governments. No party since independence has secured the majority of popular vote, the closest being the Congress in 1984 with 49.1 per cent.

Yet, there have been long stretches of time when ruling parties railroaded their way to enact legislations, and notify rules and regulations, opposed by the majority of people and their representatives.

A Parliamentary majority, coupled with pliant presiding officers ensured during these phases that laws were passed without consultations and amid protests or din. This proclivity has become more barefaced in the past two years.

Between 2014 and 2019, the Bharatiya Janata Party (BJP), despite barely 31 per cent of voters backing it, ran roughshod over not just the Opposition, but also its coalition partners because the party had an absolute Parliamentary majority on its own, and did not depend on them for survival.

In 2019, although the BJP’s vote share increased to 37 per cent, it was way short of the majority mark to justify the complete hegemony it established. In this period, the BJP’s two oldest allies, Shiv Sena and Shiromani Akali Dal, parted ways, the former even establishing a seemingly politically improbable coalition in Maharashtra. Relations with the Nitish Kumar led Janata Dal (U) too remains tenuous.

Yet, the enhanced mandate for the BJP and its leader was interpreted within as sufficient reason to further take no notice of viewpoints at variance with Prime Minister Narendra Modi and the BJP’s ideological affiliates.

Also read: The ‘Core Committee’ obsession of Opposition and why it does not work

Experiments with, or exercises in, forging new coalitions are essential to keep the ruling party’s anti-democratic intentions in check and prevent subversion of democracy within parliamentary systems.

These efforts have met with success in India, barely, as well as squarely, in the past – right from 1967 when the era of single-party dominance came to an end. The quality of governance has not suffered through these years and several decisions taken were pro-people in character and served to secure democracy and institutions.

Given this backdrop, Congress Interim President, Sonia Gandhi’s initiative to assemble leaders of nineteen parties on August 20 and begin working together with the “ultimate goal” of defeating the BJP in the 2024 Lok Sabha elections and providing an alternative government, is a welcome development.

Although realising the objective may appear extremely improbable at the moment for multiple reasons, the most important being the continuing perceived popularity of Modi, the development has indeed served a minor notice on the government.

For a regime that has been rarely concerned about forging unanimity with the Opposition on issues of domestic significance and the country’s security and global standing, Modi’s directive on August 23 to the ministry of external affairs to brief Parliamentary leaders of other parties on the situation in Afghanistan, is an indication that the Opposition’s gingerly moves have been noted.

For seventeen years, since the run up to the Lok Sabha elections in 2004, national politics has been neatly segmented into three distinct groups – the BJP and Congress-led coalitions, besides the regional parties, often dissimilar in political and programmatic inclination.

In the years when the United Progressive Alliance was going strong, the National Democratic Alliance stewarded by the BJP, shrunk and when the good tidings appeared on the horizon, the platform regained vitality. Likewise, the Congress and its allies were a dispirited lot after 2014, and the 2019 verdict did not make things any better.

However, the recent meeting is not just the most serious attempt at Opposition unity since 2014, but also was an assemblage of political parties and leaders who are locked in adversarial contests in multiple states, thereby it conveyed an effort to make the seemingly impossible, possible.

For instance, the participation of the Communist Party of India (Marxist) on a platform where its bitterest rival in West Bengal, the Trinamool Congress was also present. Furthermore, the Left Front and the Congress-led United Front in Kerala still remain locked in a contest that remains essentially bipolar despite BJP’s pretence of being a serious aspirant to power in the state.

Yet they were willing to explore ways to make common cause in a round where they have a common adversary.

In addition, although the Samajwadi Party was missing from the meeting, its leader Akhilesh Yadav sent a letter of regret expressing inability to attend because he was in a remote area of Uttar Pradesh. This could well be a ruse to stay out of the move because, the party, as of now, does not wish to accommodate the Congress in the alliance it is forging for next year’s assembly polls in the state.

But, Yadav’s letter, is certainly an indication that he is keeping his options open, insofar as a joint anti-BJP front is concerned, at least for 2024.

There are however unresolved issues at hand, uppermost being the leadership question, agreement on issues, especially which have to be priorities, and most importantly the extent to which the BJP should be engaged on ideological issues – especially its blatant Hindutva thrust.

Despite the seeming recovery in Modi’s personal and the BJP government’s ratings since the days in the immediate aftermath of the devastating second wave of the COVID-19 pandemic, the current period continues being the weakest moment since Modi’s second coming in 2019.

Realisation of this has dawned on the government too and evidenced in the form of initiatives that are against the grain of Modi’s exclusivist attitude towards the opposition. 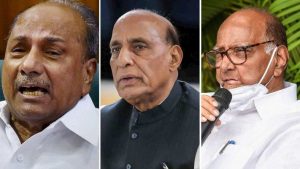 Prior to the Pegasus issue washing out almost the entire monsoon session of the Parliament, the Defence Minister Rajnath Singh invited and met with former Defence Ministers, AK Antony and Sharad Pawar, to brief them on the security situation of the country (read as the current situation with China).

This was followed by a briefing by health ministry officials on the COVID-19 situation, which was also attended by Modi and several senior ministers, for Opposition party leaders. Although cracks were visible among Opposition parties over attending such a meeting during the session period, this display of disunity soon became a forgotten chapter, as these divergent parties mounted a coordinated effort during the rest of the session.

Significantly, for the moment at least, these parties have chosen silence on hardcore and divisive political issues for tactical reasons. But, while no mention is made about continued attacks on Muslims and the rush of Hindutva-furthering legislations in BJP-ruled states, the eleven-point charter asks the government to “release all political prisoners, including those under the draconian UAPA in the Bhima Koregaon case and anti-CAA protests”.

The statement remains explicit on human rights and seeks stoppage of use of “draconian laws like sedition/NSA to violate the democratic rights and civil liberties of the people”. They also asked for immediate release of all journalists “detained for exercising their fundamental right of freedom of expression”.

Even on Kashmir, the parties did not shy away complete from taking a firm position. They demanded release of political prisoners, restoration of statehood and elections. Clearly, different Opposition parties shall continue articulating minority-related issues on the basis of the political realities in specific states, but remain quiet on these matters while taking on the BJP at a national level.

This issue certainly riles the civil society for the reluctance of Opposition parties to lock horns with the BJP for its relentless pursuit of Hindutva. But then, the role of the secular civil society or the intelligentsia is to act as a pressure group on Opposition parties, just as the affiliates of the BJP within the sangh parivar exert pressure on the BJP to be more forceful on ideological issues.

The Congress for the moment has wisely not raked up the leadership question because this would stymie ambitions of several satraps who head their own parties. But regional forces cannot be unaware of the fact that the Congress remains the largest national Opposition level party (although its influence has shrunk over the years). Already Sharad Yadav has suggested that Sonia Gandhi or Rahul Gandhi should chair the proposed Opposition parties core committee.

This issue will however, surface sooner or later and despite the plan for 2024 still being nebulous and subject to much alterations through 2022-2023 when crucial assembly polls may further alter the political topography, the BJP cannot afford to remain the big-headed behemoth.