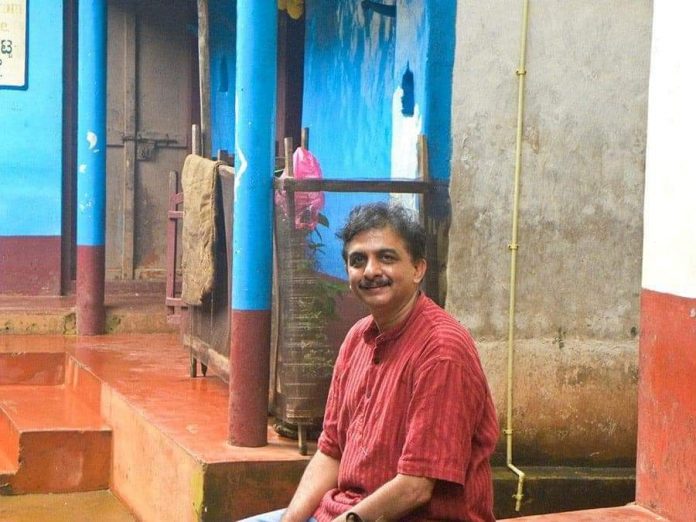 Jayanth Kaikini has lived in Mumbai for nearly twenty-three years and most of his stories are set against the backdrop of the city. He is so completely in tune with the heartbeat of Mumbai

The film adaptation of renowned Kannada writer, Jayanth Kaikini’s short story “Madhyantara”(Interval), an intense doomed love story of two lonely souls, is all set to hit Netflix on September 17. Even as Girish Kasaravalli’s “Illiralaare Allige Hogalaare” (neither here nor there), based on another of Kaikini’s short stories “Haalina Meese” (milk stained moustache) is making waves in the international film circuit by bagging a lot of awards.

Of the three filmmakers, Abhishek Chaubey (of “Ishqiya” fame) has adapted “Madhyantara”, an intense story of two lonely souls who strike a surprising connection and discover companionship in a cinema theatre. This story which has a surreal, dream-like quality has been written by Kaikini, a poet, playwright, screenwriter, lyricist and an extremely well-known figure in the Kannada cultural world.

Chaubey made his short film from the English translation of Kaikini’s short stories by Tejaswini Niranjana, “No Presents Please”, which had bagged the prestigious DSC Prize for South Asian Literature 2018.

“Madhyantara” is the poignant story of Nanda Kishor Jagatap aka Nandu, an usher at the single-screen Malhar Theatre and Manjari Savant, a film-viewer from Mahindrakar Chawl, make a connection and wordlessly start to dream of an imaginative, alternative life together in the dream city of Bombay.

In this story, Kaikini’s two innocent protagonists manage to gently disengage themselves from the harsh realities of their own life, to see themselves as who they are and revel in that feeling. Though both know nothing about each other, but they forge a bond however fragile and temporary.

Like other characteristics of Jayanth’s short stories which has a touch of magic realism, there is no dearth of sociological details in “Madhyantara” as well. Class, creed, culture, age, gender, and caste are all sharply observed and sensitively understood in a mammoth concrete jungle like Mumbai.

Mumbai forms the backdrop of most of his stories

Chaubey may have chosen “Interval” because Mumbai forms the backdrop of this doomed love story. Having lived in Mumbai for nearly twenty-three years, Kaikini is in step with the heartbeat of Mayanagari Mumbai, and naturally, his stories are so full of the distinctive character of the city. It appears Kaikini cannot have written the kind of stories, in “No Presents Please” without Mumbai.

Kaikini is able to effectively capture every nook and corner of Mumbai and its people. He is acquainted with the pulse of the city and its underbelly while jostling for space in the local trains. Quintessential qualities of Kaikini as a writer is that he is a powerful and valuable observer, he is truly a city mapper. Mumbai city resonates in the dreams, hopes, and fears of the characters that people his stories. Landmarks of Mumbai serves for him as metaphorical markers and forms a surreal landscape on which he pegs his narratives.

Also read: Aparna Sen’s ‘The Rapist’ to have world premiere at Busan

“Bogaseyalli Male”(Rain in Hand Cup) – a 86-minute documentary on Kaikini by Nitin Mysuru traces the way Mumbai influenced and inspired Kaikini. He had lived in Mumbai, where according to him – space is almost non-existent, yet it created a landscape for him to transcend all barriers. Hence, 90 percent of his work has the city as its backdrop.

These ingredients might have influenced Chaubey to opt for “Interval” for his short film venture in the Netflix anthology. As Kaikini’s writing itself is in the form of the script with all relevant details, it may not have become difficult for Chaubey to adapt this story.

Chaubey, who has carved a niche for himself in Indian cinema with his “Ishqiya”, “Dedh Ishqiya”, “Udta Punjab”, recently received a lot of appreciation for his short film, “Hungama Hai Kyon Barpa”, a Ghulam Ali-tinged adaptation of one of the most loved stories by Satyajit Ray. This was a part of the four-part anthology titled “Ray” that Netflix released recently.

Coincidentally, “Illiralaare Allige Hogalaare” (based on Kaikini’s short story) the Kannada film directed by the inimitable Girish Kasaravalli, is also set in Mumbai.

Besides speaking about displacement and disillusion that comes in the wake of uprooting oneself from one’s moorings and familiar surroundings, “Illiralaare” is a film about alienation, which delineates the complexities of migration, which is a universal phenomenon.

This short story by Kaikini, which is set in Mumbai of the 90s, is more relevant now than before. This is probably the reason “Illiralaare Allige Hogalare” has bagged several awards in various International Film Festivals, including the recent Director’s Vision Award-2021 in Feature Film category at the 18th Indian Film Festival at Stuttgart.

Kaikini as a lyricist

He is one of the most significant writers in Kannada, but Kaikini attracted a new generation of admirers only after he became a lyricist in 2006. “People started reading my works seriously after the success of the film “Mungaru Male”, admits Kaikini with humility.

However, he won the hearts of the younger generation through his poetry, because of subtlety, a flair for magic realism, and minute documentation of the seemingly commonplace, and for creating his own colloquial idiom. His poetic qualities earned him the sobriquet of a post-modernist writer.

He has six poetry collections, nine collections of short stories, four essays collection, and four plays to his credit. His plays are directed by major theatre practitioners of the land.

Kaikini is the recipient of “Kusumagraja” National Literary honour instituted by the Nasik Open University, and a honorary doctorate from Tumkur University. Besides receiving the Karnataka Sahitya Akademy award. He edited Bhavana, a monthly magazine, which created a new model for a literary monthly magazine and followed by other publications later.

This writer is a prodigious film buff. His “Touring Talkies” is a collection of essays with insights on Indian cinema. Kaikini dedicated this collection to the gatekeepers of single screens in the country.

“Bidugade”, one of his poems is about single screens which had introduced him to the magic of celluloid in his younger days. Long ago, Kaikini joined the league of Kannada litterateurs, including; Bendre, Shivarama Karanth, Devudu, Chandrashekara Kambara, Girish Karnad, P Lankesh, Doddarange Gowda, H S Venkateshamurthy, who had enriched Kannada cinema through their words and visuals.

But, never did Kaikini dream that he would write songs for films. Besides writing scripts and songs for the films, Kaikini has also worked as an art director. Once he had confessed that; “I can pen lyrics for film songs only because I am a film buff. It has nothing to do with poetry or awards”.

“Anisutide Yaako Indu…”, the lyrics of the song “Mungaru Male” ushered in a new wave in Kannada film songs. In a way, “Mungaru Male” heralded the arrival of Kaikini as one of Kannada’s most popular lyricists.

In the past one and half decades, Kaikini has written over 300 plus songs. “When Yogaraj Bhat, director of “Mungaru Male” came to me to write a song for the movie, I was a little hesitant. I wasn’t sure of writing a love song when I was in the midst of crossing my 50th year. But, I did it anyway, and that is how “Anisutide…” came into being and you know the rest is history”, he smiles.

Besides being bestowed with Filmfare awards for his film lyrics and various other film awards and nominations, Kaikini loves films, like the way he loves literature, especially poetry. He dedicated his awards to the “Darkness in the cinema theatre that unites all”.

Being a staunch film buff, what was Kaikini’s response when Chaubey approached him seeking permission to adapt “Madhyantara” into the visual medium? Kaikini, who has his own apprehensions about his stories being adapted by new-generation filmmakers, had earlier refused permission for some random filmmakers.

On Chaubey however he says, “Besides being a sensitive and creative filmmaker, Chaubey is a sensitive person and understands, tone, tenor and nuances of the literary work to be adapted. I was really impressed by his treatment in the ‘Ray’ series on Netflix. This is one of the reasons I allowed him to adapt Madhyantara”.

Did he lay down any conditions to Chaubey on the treatment of his text like writers usually, do? “No. If I had not watched the “Ray” series, I would have refused him permission. But I was floored by his treatment of Ray’s text. My only condition was that he should show the script to me before the film goes on the sets. This is because I write short stories in the form of cinema script with all the details and I did not want those details to get diluted in the process. Understanding my concerns, Chaubey promptly sent the script and I asked him to go ahead with the shooting after going through the script. I liked the script immensely. Like you, I am also curious, how “Madhyantara” will look on screen”, says Jayanth impishly.