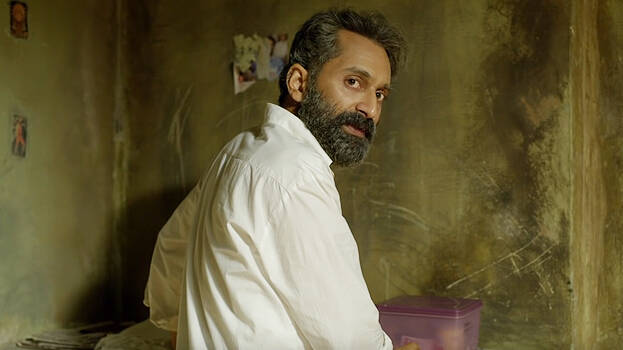 The hero in ‘Malik’, a Malayalam film, is not Fahadh Faasil. For one, it is because the actor, who plays the benevolent don, Ayammadali Sulaiman, in a coastal community in fictional Ramadapally in Kerala, underplays the character and keeps it low key.

Though the camera lovingly lingers over him through tight close-ups as he emotes in critical scenes and the film is focused on his journey from a small-time marijuana peddler to a smuggler, who crosses swords with the law and becomes a tall and powerful leader of his community, Faasil’s presence never dominates the film. He doesn’t imbue the character with a larger-than-life persona or even makes the don a daunting figure.

Whether this is deliberate or not remains a question but it is also because of this, you don’t feel completely invested in his pain over a mother who disowns him or the betrayals he faces or the tragedy that befalls him.

Secondly, the cinematic craft behind ‘Malik’ towers over everything else in the film. Mahesh Narayan, (‘C U Soon’ and ‘Take Off’ fame), who has directed, edited and written the film, lays out a sprawling canvas to tell his period epic tale about the evil political tides that wash over Ramadapally over the years.  (Not surprising since Narayanan has been nurturing the plot since 2011). 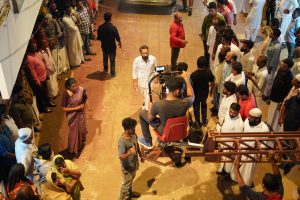 There is so much that is packed into the film with many characters floating in and out of the frames, you may have to go back and watch it again.

The plot is set among two communities in coastal Kerala and the issues they face seem to take prominence in the film. ‘Malik’ questions how coastal communities can live amid the threats of sand-mining, or land encroachments due to harbour and coastal highway projects, and worry about the constant fear of displacement, and battle natural disasters such as tsunami and the Ockhi cyclone.

However, the film largely pegs itself on the dirty politics played by authorities in Ramadapally. The government and the police cause a communal conflict to flare up between the Christian and Muslim communities, who had been co-existing happily in the area for years. And, this leads eventually to a police firing incident and the death of innocent people, including children.

Though Narayanan has denied it, the film seems to be clearly linked to the May 2009 Beemapally riots, in which the Kerala police shot and killed six Muslim fishermen and injuring 52 others, ostensibly to quell a ‘communal riot’ in the area. That was the narrative allegedly given by the police and the government at that time. But, human rights groups who have visited the area have submitted reports that show the problems were instigated by the police.

Also, Malik’s story plays around a mosque. Beemapally, a Trivandrum suburb, too has been named around the famous and beautiful masjid (and dargah shareef) built in the name of a Muslim woman saint Syedunnisa Beema Beevi, who was believed to have divine powers.

In the film, Malik’s mother comes to a ‘mosque’ bringing her child and husband who have high fever to be cured by Beema Beevi. Also, the annual Uroos festival which is celebrated to mark her death anniversary weaves its way into the film. There’s more – at the end – the film features an epilogue, which makes a strong case for the people of Ramadapally (Beemapally?) and lays the blame for the firing entirely at the police’s door.

Narayanan, a fan of I.V. Sasi’s hit political film, ‘Ee Nadu’ and Costa-Gavras’ hard-hitting political films, seems to be sending out a message in ‘Malik’ that he is not going to shy away from making sharp political statements with his films.

The technical aspects of ‘Malik’, especially the much-talked about 14-minute long structured opening sequence, are brilliant. In the opening shot, the setting is a large house where an ageing don, Sulaiman, who wants to put all his “ungodly” work behind him, is going off on a Hajj trip.

His weary-looking wife Roseline (Nimisha Sajayan) seems to be a strong force urging him to do the right thing, even as a corrupt minister Aboobacker (Dileesh Pothan) drops in for Sulaiman’s approval for a harbour project in the area. That predictably angers Sulaiman, who has fought all his life to ensure the land belonging to the coastal community is never encroached by the authorities in any form.

Yet, Aboobacker is the greedy, manipulative politician who continues to twist every incident that unfolds in the film for political gains. If there are no shades to this character, it is because the director seems to be concentrating on playing out the film in flashbacks, bringing in documentary shots of the 2004 tsunami that devastated coastal villages in the south or even earlier, shifting the story to the pretty island of Minicoy in Lakshadweep to culminate a blossoming romance between a young Roseline and Sulaiman.

Faasil transforms into a love-sick husband, and he is so good in these romantic scenes that you wonder how it would be if he ended up doing romantic hero roles instead of the dark roles that he has been saddled with of late.

Even as Sulaiman strengthens his position as a don of the area, Roseline’s brother David Christudas (Vinay Forrt) watches his childhood friend’s growing stature with mixed feelings. Though David is happy for him, he feels that Malik is being partial to the Muslims in the area. The seeds of trouble get sown here.

The scene, in which Sulaiman asks David for his sister Roseline’s hand, sitting by a large-sized statue of Jesus stretching out his arms as if to welcome the Muslims in the coastal colony located opposite the Christian one, is special. Moments like this liven up an otherwise interminably long-drawn-out film. But justice has to be served and if Kamal Haasan in ‘Nayakan’ was troubled whether he was a bad or good guy, or Al Pacino in ‘Godfather’ slips into his father’s shoes without a qualm, Sulaiman is quite clear that he has done wrong, (his wife tells him once that his hands are stinking of blood) and he is ready to meet his maker.

Joju George comes in somewhere in the middle of the film as Anwar Ali, a senior cop and then as a collector of the area, who is instrumental in making strategic moves to maintain control over the area. He strongly resembles Mohanlal’s strong character in the other famed Hindi gangster movie made by Ram Gopal Varma, ‘Company’. However, Anwar Ali, who turns out to be a key character in ‘Malik’ in the end, seems to just pop up now and then to keep the plot moving.

Besides the stunning cinematography by Sanu Varghese (who made the much-talked-about Malayalam film, ‘Aarkariyam’), the music by Sushin Shyam is haunting as well. The acting is adequate as all the actors play the part they are meant to well. Nimisha however looks unnecessarily stern, while Vinay Forrt as David and Sanal Aman as Freddy, the delinquent nephew who has to kill Sulaiman in jail, hold their own in this epic complicated drama.

It is a long-drawn-out, complex film with a significant political statement to make but ‘Malik’, which started streaming on Amazon Prime Video last night, is a must for Malayalam cinema fans.

6:30 AM, 8 December, 2022 0
The three-day All India Veerashaiva-Lingayat convention is likely to raise the demand for religious status for the community as well as for its inclusion in the OBC list of the Union government

6:30 AM, 8 December, 2022 0
Left party plans open-air sessions by experts, door-to-door dissemination of information on social reality, and mass distribution of leaflets to debunk “divisive” narratives of BJP and RSS