In his book, The Coalition Years 1996-2012, former President and finance minister Pranab Mukherjee has mocked the silence of successive Finance Ministers over one of the most controversial tax proposals of all times, the retrospective tax. It was proposed by Mukherjee in the Union Budget for 2012-13 and is widely believed to be the reason for him getting sacked later. The tax has caused irretrievable damage to India’s image as an investment destination.

“Despite the angst that my proposal generated at that time, and even now, both from within my party and outside, I wonder why every succeeding finance minister in the past five years has maintained the same stance,” Mukherjee said in the book.

He first proposed what is now known as the retrospective tax on the transaction where Hutchinson sold its stake in the Indian telecom business to British telecom major Vodafone.

Mukherjee’s logic seemed irrefutable at the time: the source country should protect its tax base by ensuring that foreign investors, who have earned through their investments in the source country, should also pay taxes like any other domestic investor or resident taxpayer. The tax was brought in to reverse a Supreme Court decision upholding the plea of Vodafone that it did not apply to the telecom major’s transaction in India.

But ever since, India has suffered. And now that the current Finance Minister Nirmala Sitharaman has proposed to do away with this tax by taking the sovereign route (instead of agreeing to arbitration courts’ decisions, which have been challenged), perhaps Mukherjee would have understood the extent of damage this single UPA era provision did to India’s image and attractiveness as a foreign investment destination.

Since the tax was imposed, income tax demand has been raised in 17 cases, Sitharaman informed Parliament on Thursday. In two of these cases, assessment is pending due to stay granted by High Court. In four cases, arbitration under Bilateral Investment Protection Treaty with the United Kingdom and the Netherlands had been invoked. In two other cases, the Arbitration Tribunal has ruled in favour of the taxpayers and against the Income Tax Department.

A French court has already frozen Indian properties worth millions of euros in that country in the case involving Cairn Energy Plc.

And an Arbitral tribunal (which has its seat in the Hague) has pronounced its award on 21st December 2020 in favour of Cairn Energy Plc and Cairn UK Holdings Ltd. It has asked India to pay Cairn an award amount of $1.23 billion-plus interest and $22.38 million towards arbitration and legal costs.

Another litigant, Devas Multimedia, joined the $1.23 billion Cairn suit and threatened to seize aircraft and properties (including famous artworks) of Air India in the USA. 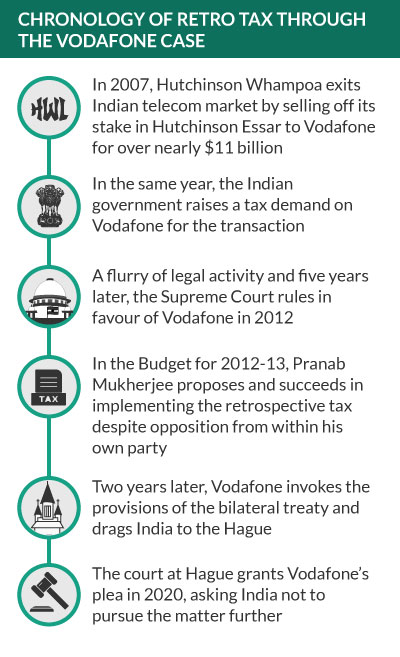 Last year, Vodafone too had fought and won the case against India at the Hague, in a nearly $2 billion tax claim. The case of Vodafone is much more complicated though. The amendment to the retrospective tax provision by India comes just when its Indian operations (in which it holds a majority 44% stake and the AV Birla Group holds nearly 27%) are on the brink.

The immediate trigger for Vodafone Idea Ltd’s (VIL) sorry state is seen to be the demand by the Indian government about accumulated past license fee dues, but the brouhaha over retro tax — it all started with Vodafone, remember? — has not died down.

Now, as Kumar Mangalam Birla has stepped down from the telco’s board after asking the government to take over his stake, Vodafone’s fate in India has come under renewed scrutiny as has the retro tax.

Meanwhile, in the statement of objects and reasons of the Taxation Laws Amendment Bill (2021) tabled in the Lok Sabha, Sitharaman has acknowledged the criticism India has faced due to this tax.

“The said clarificatory amendments made by the Finance Act, 2012 invited criticism from stakeholders mainly concerning retrospective effect given to the amendments. It is argued that such retrospective amendments militate against the principle of tax certainty and damage India’s reputation as an attractive destination.”

She has spoken about a “sore point” with investors due to retro tax and referred to the economic havoc caused by Covid19. “The country today stands at a juncture when quick recovery of the economy after the COVID-19 pandemic is the need of the hour and foreign investment has an important role to play in promoting faster economic growth and employment.”

It is interesting to see the wide divergence in the views of the present dispensation and Mukherjee. The former FM had pooh-poohed the role of taxation in affecting FDI.

“What foreign investors need is certainty in tax laws and not a tax-free environment, which no emerging economy can afford,” he said. FDI investments are not dependent upon tax; rather, crucial deciding factors include the size of the domestic market, low costs of operations and labour and skilled manpower. Competition from relatively low-tax countries without these advantages is unlikely for the location choice of FDI, Mukherjee had said.

The bill introduced by Sitharaman proposes to amend the Income Tax Act, 1961 to provide that “no tax demand shall be raised in future based on the said retrospective amendment for any indirect transfer of Indian assets if the transaction was undertaken before 28th May 2012 (i.e., the date on which the Finance Bill, 2012 received the assent of the President).”

It also proposes to provide “that the demand raised for indirect transfer of Indian assets made before 28th May 2012 shall be nullified on fulfilment of specified conditions such as withdrawal or furnishing of undertaking for withdrawal of pending litigation and furnishing of an undertaking to the effect that no claim for cost, damages, interest, etc., shall be filed.”

Further, the bill proposes to refund the amount paid in these cases without any interest thereon and also proposes to provide that the validation of demand, etc., under section 119 of the Finance Act, 2012 shall cease to apply on fulfilment of specified conditions such as withdrawal of pending litigation and furnishing of an undertaking that no claim for cost, damages, interest, etc., shall be filed.

No proposal to introduce menstrual leave in e...