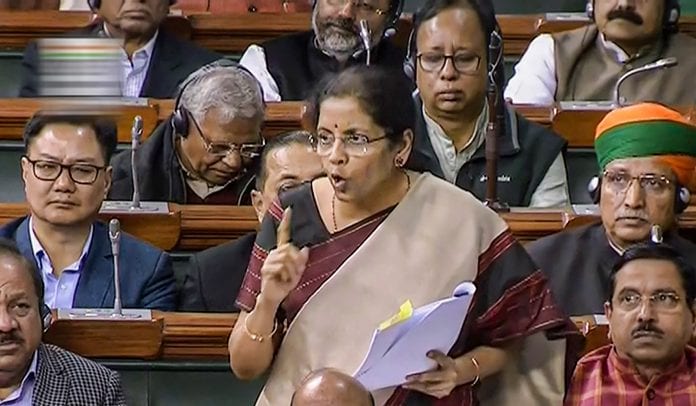 The government on Thursday brought a bill in the Lok Sabha to withdraw all back tax demands on companies such as Cairn Energy and Vodafone and said it will refund the money collected to enforce such levies.

Finance Minister Nirmala Sitharaman introduced The Taxation Laws (Amendment) Bill, 2021, in the Lok Sabha that seeks to withdraw tax demands made using a 2012 retrospective legislation to tax the indirect transfer of Indian assets. The bill provides for the withdrawal of tax demand made on “indirect transfer of Indian assets if the transaction was undertaken before May 28, 2012 (i.e. the day the retrospective tax legislation came into being)”.

“It is also proposed to refund the amount paid in these cases without any interest thereon,” it said.

The bill has a direct bearing on long-running tax disputes with British firms Cairn Energy and Vodafone Group. The government has lost two separate arbitrations brought by the two companies against the levy of retrospective taxes. While the government has virtually no liability in the Vodafone case, it has to refund $1.2 billion to Cairn Energy for the shares of the company it had sold, tax refund withheld and dividends confiscated.

The bill states that the issue of taxability of gains arising from the transfer of assets located in India through the transfer of shares of a foreign company (indirect transfer of Indian assets) was a subject matter of protracted litigation. The Supreme Court in 2012 had given a verdict that gains arising from indirect transfer of Indian assets are not taxable under the extant provisions of the Act. But to circumvent this, the provisions of the Income Tax Act, 1961, were amended by the Finance Act, 2012, with retrospective effect, to clarify that gains arising from the sale of shares of a foreign company is taxable in India if such shares, directly or indirectly, derive their value substantially from assets located in India.

“Pursuant thereto, income-tax demand had been raised in 17 cases. In two cases assessments are pending due to stay granted by high court,” the objects of the Bill said.

Out of the 17 cases, arbitration under Bilateral Investment Protection Treaty with the United Kingdom and the Netherlands had been invoked in four cases.

“In two cases, the Arbitration Tribunal ruled in favour of the taxpayer and against the Income Tax Department,” it said in a reference to arbitration awards won by Cairn and Vodafone. “The said clarificatory amendments made by the Finance Act, 2012, invited criticism from stakeholders mainly with respect to the retrospective effect given to the amendments. It is argued that such retrospective amendments militate against the principle of tax certainty and damage Indias reputation as an attractive destination,” it said.

While the government has in the past few years brought major reforms in the financial and infrastructure sector to create a positive environment for investment in the country, “the retrospective clarificatory amendment and consequent demand created in a few cases continue to be a sore point with potential investors”, it said.

“The Bill proposes to amend the Income Tax Act, 1961 so as to provide that no tax demand shall be raised in future on the basis of the said retrospective amendment for any indirect transfer of Indian assets if the transaction was undertaken before 28th May 2012 (i.e., the date on which the Finance Bill, 2012, received the assent of the President),” it said.

It further proposed to provide that the demand raised for indirect transfer of Indian assets made before May 28, 2012, shall be nullified on fulfilment of specified conditions such as withdrawal or furnishing of undertaking for withdrawal of pending litigation and furnishing of an undertaking to the effect that no claim for cost, damages, interest, etc shall be filed.

It also proposed to “refund the amount paid in these cases without any interest thereon”.