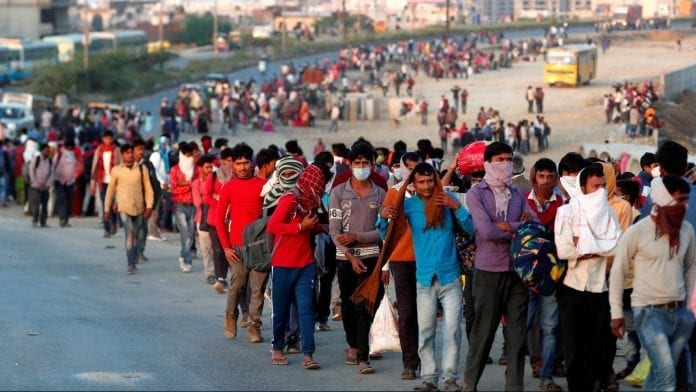 But Bihar couldn’t take advantage of the demographic dividend as enough job opportunities could not be created for youths locally. So migration to other states still remains high. Now a large number of youths from Siwan and other districts of Bihar are also migrating to Gulf countries for better opportunities.

About 2.5 million migrant workers returned to Bihar after the national lockdown was imposed following the outbreak of the COVID-19 pandemic last year. A majority of workers, however, returned to their workplaces in various states across the country as the state government could not provide them alternative sources of income.

Another important factor holding back the state from taking advantage of the demographic dividend is its poor urbanisation.

Also read: China abolishes fine for couples with more than one child to boost population

Urbanisation is directly linked to the socioeconomic development of an economy, but the level of urbanisation in Bihar is extremely low at 11.3 per cent, compared to 31.2 per cent in India. The decadal increase in urbanisation in Bihar has been only 0.8 per cent, against much higher increase of 3.4 per cent in India. In such a situation, Bihar’s youths are unable to get employment locally and move out of the state for livelihood and higher salaries.

According to one estimate, Bihar’s population reached about 124.8 million (12.48 crore) in 2021. A rising population is a strong burden on the state’s continually degrading natural resource base.

Economists and academicians from Bihar have expressed their concern over the government’s failure to exploit the state’s demographic dividend.

Dr Dilip Kumar, associate professor at Patna University’s Population Research Centre (PRC), said Bihar has lost the opportunity to exploit its demographic dividend as not enough opportunities were created for the local youth. He said had the government trained youths in various skills, dependence on the government sector for jobs could have reduced significantly.

Dr Kumar said there is enough scope for training local youths in healthcare, nursing and paramedical fields and the government should explore opportunities for it.

He said a large portion of north Bihar is ravaged by floods every year, making its industrialisation very difficult. In such a situation, the focus should be on vocational courses.

Economist Prof NK Choudhary said: “We should not do politics over migration and instead create job opportunities for youths locally.”

He said Bihar missed the chance to exploit the demographic dividend since adequate focus was not given to check migration and create job opportunities locally. He said no single government could be blamed for it, as successive governments did not address the problem.

On Bihar’s high fertility rate, Prof Choudhary, taking a different view from that of Chief Minister Nitish Kumar, said there is nothing wrong if a law is enacted to control the population, but it should not violate human rights and care should be taken to ensure that interest and rights of the poor are protected.

The economist asked why laws on prohibition and dowry were enacted if only awareness and education were sufficient.

Another economist and former director of AN Sinha Institute of Social Studies (ANSIS), Dr DM Diwakar, said development is the best “contraceptive”, as families that are economically and educationally developed tend to have fewer children.

He said there could not be a simple thumb rule to control population and a law on it could only act as a facilitator. He said that women’s education should be encouraged and also their early marriage should be avoided to reduce a high fertility rate.

Nitish Kumar has always advocated enhancing the educational level of women to reduce the population growth.

The CM has on several occasions stressed that educating women has helped in gradually bringing down Bihar’s TFR.

Nitish’s refusal to take any cue from his UP counterpart Adityanath’s population control policy even resulted in a political slugfest between him and Shiv Sena MP Sanjay Raut.

Raut had asked the BJP to withdraw support from the Nitish government for “opposing” Adityanath’s proposed population control bill.

“I don’t take Shiv Sena seriously. I don’t even care what they say about me. I don’t know what he [Raut] has said. He does not have the political acumen,” Nitish had remarked while attacking Raut.

In his weekly column in the Sena mouthpiece Saamana, Raut had welcomed UP’s proposed draft bill and said the BJP should withdraw support for the Nitish government if the JD (U) leader opposed the legislation.

BJP leaders from Bihar also disagreed with Nitish’s point of view. State BJP president and West Champaran MP Dr Sanjay Jaiswal said the Bihar government should follow the ‘one-child norm’ similar to the one being considered by Adityanath. “Education and awareness can go alongside,” he said.

BJP MLA and Bihar Panchayati Raj Minister Samrat Choudhary said the Bihar government is considering a ban on candidates with more than two children for the upcoming panchayat polls. He said that such rules already exist for civic bodies and now panchayat polls could also be covered under them.

Dr Jaiswal said if the CM could implement two-child norms in 2007 for those willing to contest municipal polls, he should consider a positive regulation like the one-child norm.