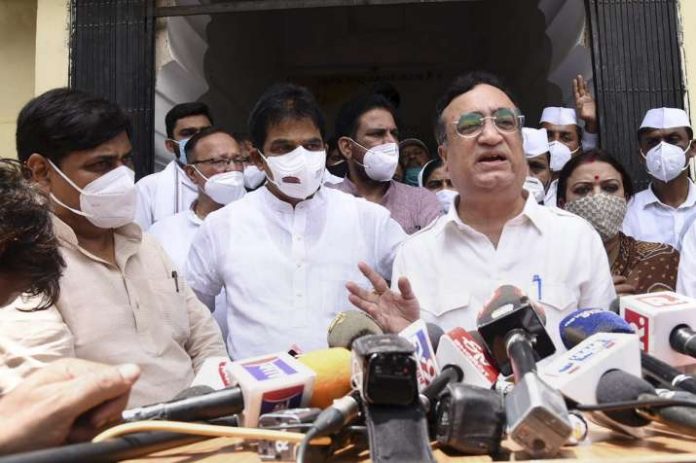 Central Congress leader Ajay Maken told the media on July 25 that the final decision on the Gehlot cabinet expansion has been left to the party leadership. PTI Photo

Having been able to stave off an immediate crisis in the Punjab Congress, the party has now set its sights on neighbouring Rajasthan. Central party leaders have told Chief Minister Ashok Gehlot not to delay the cabinet reshuffle – primarily meant to “adjust” his detractors in the Sachin Pilot camp.

Media reports said the CM will possibly go in for the ministerial shake-up in the first week of August or even sooner.

It was Pilot who had led a month-long rebellion in the party last year. In the culmination of that crisis, Pilot had lost both his No. 2 position in the government as well as the top party post in the state. Media reports on Monday (July 26) speculated that Pilot could possibly be made AICC general secretary in an attempt to balance things out in the state unit.

Also read: Gehlot vs Pilot: Speculation rife in Rajasthan ahead of Cabinet rejig

Chief Minister Gehlot has to do a delicate balancing act; on the one hand he has the Pilot loyalists to contend with and on the other, BSP defectors to the Congress and Independents.

On Sunday (July 25), senior Congress leaders from Delhi, Ajay Maken and K.C. Venugopal, left the decision about Gehlot cabinet reshuffle to the party’s central leadership. They reportedly could not convince Gehlot to go in for a power sharing arrangement with the rival faction.

Maken and Venugopal had arrived in the state capital Jaipur on Saturday (July 24) to bring about rapprochement within the ruling party. They left the next day after meeting the Pradesh Congress Committee office-bearers.

Maken told the media that there was “no conflict” among the Congress leaders in the state and that they had left the final decision on the cabinet expansion to the party leadership. Maken is due to return to Jaipur on July 28 for a two-day meeting with party MLAs on the functioning of the government as well as the party organization.

Also read: Are you joining Jitin Prasada in BJP camp? Pilot has this witty answer

There are reports that the Sachin Pilot-led Congress faction is reportedly upset over the continued delay in the expansion of the state cabinet. Leaders close to Sachin Pilot and Chief Minister Ashok Gehlot are locked in verbal spats ahead of the possible cabinet shakeup.

In the 200-member Assembly, the Congress has 106 seats with as many as 18 pro-Pilot MLAs. In September 2019, all the six BSP MLAs had joined the Congress, thus taking the strength of the party to 106 seats. The Opposition BJP has 71 MLAs.

At present, there are 21 members in the council of ministers, including the CM, and nine slots are vacant. Rajasthan can have a maximum of 30 ministers.