Brushing aside environmental concerns, the Telangana government is set to fast track the mega Pharma City project on the Hyderabad-Warangal highway to host pharma firms, research and development centres, and a pharma university, making it a one-stop cluster for pharma and healthcare companies and service providers.

The decision is based on the assessment that several pharma suppliers could shift out of China post-COVID-19 and that it is ideal time to attract them into the state and to consolidate Hyderabad’s pre-eminent position in the pharma sector.

However, the project, to be located at about 50 kms from the city, has raised the hackles of environmentalists who warn that it could destroy the natural ecosystem, polluting air, water and land.

“Given the past experience, we are extremely worried about the public health hazards that the proposed Pharma City will cause. There is bound to be further deterioration of the environment,” noted environmentalist activist Prof Purushotham Reddy said.

Having already acquired 8,400 acres for the project, the government is now planning to acquire another 6,800 acres over the next three months. The entire project is being planned in three phases, spread over 19,333 acres, and targeted for completion by 2025, as per the masterplan of the Hyderabad Pharma City (HPC) project.

Sources say that the government is keen on rolling out phase-I by this year-end, to cash in on the greater demand for drug and vaccine formulations and pharma and life sciences sectors in the aftermath of COVID-19 pandemic.

“We are setting a new international benchmark for smart, sustainable and integrated industrial development model here. We are not competing with any other state but with China and the rest of the world,” the State Industries Minister K T Rama Rao said.

“Once completed, it will be the most modern global pharma cluster and is expected to attract investments worth ₹65,000 crore and create direct employment for 1.75 lakh people and indirect employment to 2.50 lakh people,” said KTR as the chief minister K Chandrasekhar Rao’s son is popularly known.

Dismissing the fears over the adverse impact on environment, he said, “We are adopting the best international practices and inviting international scrutiny. Unlike in the past when the pharma hubs on the outskirts of the city had caused severe pollution, modern technologies are available now to make the project pollution-free.”

The HPC will have link roads and internal roads and other infrastructure facilities besides connectivity to Hyderabad international airport.

“Several pharma companies have evinced interest to set up their units in HPC and submitted applications for allotment of land,” the managing director of Telangana State Industrial Infrastructure Corporation (TSIIC) Narasimha Reddy said.

While link roads are being readied in phase-I, internal roads and other facilities will be completed soon. “We want to fast-track phase-I and take up phase II soon,” Reddy said. The government’s plan is to make phase-I operational by the end of this year by providing infrastructure facilities. 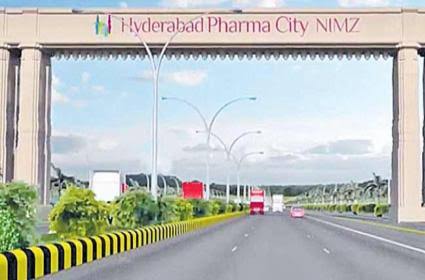 While the government’s plan sounds ambitious, it evokes a sense of skepticism among observers because of the poor track record of the successive governments in the combined Andhra Pradesh in controlling the pollution around the pharma clusters that mushroomed in and around Hyderabad.

Already, the adjoining districts like Medak, Ranga Reddy and Nalgonda are facing severe pollution problem because of the indiscriminate mushrooming of pharma companies in violation of the norms. Environmentalists warn that the proposed pharma city project will lead to further deterioration of the environment.

However, the government argues that the focus of the Pharma Cluster is to bring down the cost of manufacturing and make companies globally competitive.

In the first wave of major industrialisation push in the late 1970s, several bulk drug companies had come up in Medak, Ranga Reddy, and Nalgonda districts.

The Patancheru industrial estate in neighbouring Medak district had, in fact, earned the dubious distinction of being one of the most polluted townships in the country with pharma units failing to comply with the standards meant for effluent treatment.

“The impact of industrial pollution on the lives of people in the region is well documented. These units have played havoc with public health. The groundwater in the region remains highly polluted while the incidence of pollution-related diseases including asthma and bronchitis is high in nearby villages,” said S Ramakrishna, an activist with local NGO “Forum for Better Hyderabad.”

The Industries Minister counters this argument, saying the industrial units that had come up in the late 1970s and 19080s did not invest in anti-pollution technologies whereas the proposed Pharma City is a completely pollution-free initiative that will set new international benchmarks.

The ultimate objective of the pharma city, he claimed, was to make Hyderabad the preferred global pharma destination and to bring down the prices of medicines to make them affordable to the poor.

In December last year, the Centre had granted National Investment Manufacturing Zone (NIMZ) status to the project. The final approval was given based on the techno-economic feasibility study and development plan submitted by the state government.

A Special Purpose Vehicle — Hyderabad Pharma City Ltd — has been set up to implement the project.

The environmentalists pointed out that the project could drain natural resources, destroy the environment, and cause dangerous pollution to air, water, and land. It would likely also destroy the natural ecosystem.

“No pharma cluster has come up without harming the environment,” Prof. Purushotham Reddy.

Under the guise of a fast-track policy, these pharmaceutical companies were given permissions within weeks. “There is no plausible way that these companies are undergoing due diligence checks, these industries work as per demand,” he said.

Dr. Narasimha Reddy, president of Citizens Against Pollution, a city-based NGO, said that the project would wreak havoc on the environment.

“We would appreciate if the government backtracks from building a pharma city over a huge extent of land as it is not only dangerous to the environment but also not viable,” he said.

“The entire process was hurried through and the farmers were paid very low price for their lands,” said K Saraswati, a local activist.

The activists said that the Environment Impact Assessment (EIA) report was misleading the public by claiming that each individual pharma unit will have to conduct EIA studies. “Once the NIMZ (National Investment and Manufacturing Zone) gets environmental clearance, no individual unit will be asked for clearances,” Prof Reddy pointed out.

11:57 AM, 7 February, 2023 0
Finance, HR teams to receive most pink slips; aerospace major to hire another 10,000 employees this year with a focus on engineering and manufacturing