This flows from Modi’s Independence Day address in August during which he had promised an investment of ₹100 lakh crore on infrastructure over the next five years. As a follow-up, the finance ministry had set up a task force headed by Economic Affairs Secretary to prepare a road map known as the NIP.

Since Modi’s emphasis is on promoting infrastructure projects that improve ‘ease of living’, he talked of projects like safe drinking water, access to clean and affordable energy, healthcare for all, modernising railway stations, airports, bus terminals, and creating world-class educational institutes. In other words, 80% of spending may go into roads, housing, railways, and power projects. 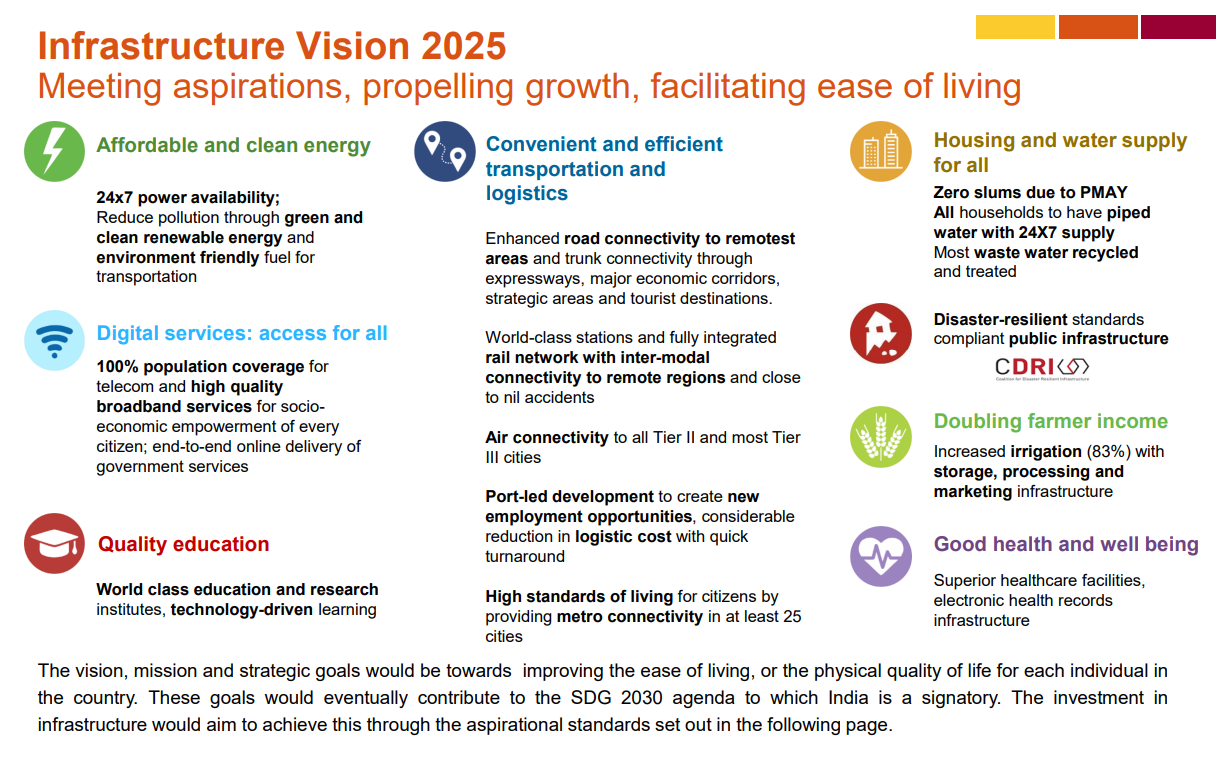 Given the present dismal state of tax revenues (about ₹19.62 lakh crore) and with a huge shortfall likely in non-tax revenues as the government is likely to miss the divestment target, it may have no other go but to resort to more debt financing to bridge the budget deficit.

The package at ₹102.55 lakh crores is nearly 40 percent of India’s current GDP. Expectations are that infusion of such a large amount of funds would help kickstart an economy that is currently in a recessionary phase.

A ballpark calculation would suggest that the economy may have to grow at the rate of 12 percent annually to achieve a $5 trillion target. At present, the economy is at $2.7 trillion levels.

Of the total ₹102.5 lakh crore, the Centre’s share is 39 percent with an equal proportion to be borne by the states. The private sector is expected to fill in the gap of about 22 percent.

The state government finances are in a dire state and they may have to raise above ₹39 lakh crore. Considering that most large businesses are currently trying to get out of their existing high-cost debts by deleveraging, the appetite for these businesses to further raise about ₹22 lakh crore looks limited.

The silver lining in the announcement is the proposed single window entity that would not only clear projects in the pipeline but also promises to monitor and guide them at different stages in the investment cycle. This could solve legacy problems that businesses have faced in the past, especially with land acquisition.

There are expectations that the exercise may spur the demand in the economy. A big project pipeline push could impact sectors like steel and cement industries. In the last one year, infrastructure projects had experienced a slowdown and that had taken its toll on the growth.

India achieved high growth rates in the decade between 2004-14 backed by the rise in rural consumption. Policymakers will need to look at the share of the NIP going towards the rural economy which would provide the much-needed multiplier effect if it hopes to achieve its ambitious target of $5 trillion before 2024.

According to Prof Subroto Roy, a Cambridge economist, such an initiative of announcing projects with no actual project analysis (details such as net present value available in public domain) of individual projects the whole exercise is questionable and in-fact could be termed ‘faux economics’ and would lead to other externalities such as inflation, capital flight, and even a forex crisis. He believes that the package in its current form is discriminatory as it takes into consideration only 19 states of the Union.

Based on India’s fiscal deficit position (as well as state of current NBFC liquidity), it is clear that conventional methods of debt cannot be pursued in the present context and the government may have to look at creative financial solutions in the markets to finance its NIP dream. Looking at the German example could be one answer.

Pfandbriefe are interest-bearing covered bonds issued on the capital market by credit institutions on the basis of the German Pfandbrief Act (Pfandbriefgesetz, PfandBG).

The Pfandbrief is used by credit institutions to fund certain loans – secured by obtaining security rights over real assets such as property, ship mortgages, or aircraft mortgages – as well as to fund claims against public sector entities.

Pfandbriefe are usually issued as bearer bonds, though sometimes also as registered bonds. Depending on the type of collateralization, these bonds are referred to as Mortgage Pfandbrief.

While Pfandbriefe tend to be associated with asset-backed securities, they are fundamentally different. Pfandbrief cover-assets remain on the financial institutions’ balance sheet. By contrast, asset-backed securities are typically off-balance-sheet transactions (in the Indian context, this gets complicated as we saw as in the case of IL&FS defaults).

Due to the stringent legal provisions that govern their issuance, Pfandbriefe are deemed particularly safe. There has been no default of Pfandbrief in its history, which includes the world wars.

Also read: India’s economic survey and the quest for a $5 trillion economy

Another key difference between the two market sectors is that in the mortgage-backed market, a special purpose vehicle (SPV) is set up and the assets are sold off-balance sheet. In Pfandbrief transactions, the assets remain on-balance sheet. As a result, the issuing bank (rather than the SPV) remains fully liable for timely payments of interest and repayment of principal.

A third important difference is that the prepayment risk, which is typical in the mortgaged-backed market is non-existent in the Pfandbrief sector.

Coping with COVID 2.0: Will Centre come up with one more stimulus pl...