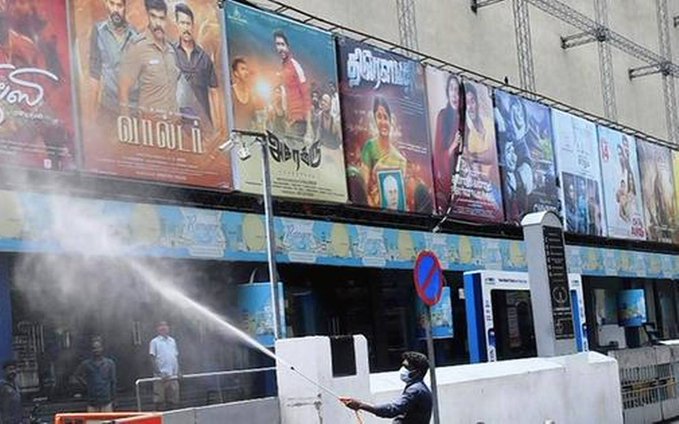 The mass fervour associated with release of films starring top film actors during the Diwali season will be missing from film theatres in Tamil Nadu this time as the producers’ association has decided not to release new films even as cinemas gear up to reopen halls keeping COVID restrictions in mind.

The key issue is the Virtual Print Fee that the Tamil Film Active Producers Association (TFAPA) has refused to pay for use of digital projectors in the theatres.

Earlier movies were shot using films and producers used to take prints and distribute it to theatres. But from 2010, the industry went digital, saving the print costs.

However, the new technology needed modern equipment to exhibit the films in theatres. Digital service providers like Qube Cinemas came into the scene and helped set up digital projectors and started collecting a ‘Virtual Print Fee’.

Projectors operators say the digital equipment cost a lot, especially for its maintenance and technology upgradation, besides the heavy import duties which cannot be afforded by many theatre owners. These costs were normally compensated from VPF and advertising revenues.

Earlier, it was agreed that film producers would pay the VPF on behalf of theatre owners to service providers, for a fixed number of weeks.

But now producers ask for how long they can bear the burden.

In 2018, the producers’ council held a strike for more than 40 days on this issue and demanded that theatre owners should take the burden of paying the fees.

But service providers offered 18-23 percent cut in the fee. Following this, till date the producers were paying the VPF. Now, the issue has surfaced again.

Producers on the other hand have realised the potential and wide reach of OTT platforms like Netflix, Amazon Prime, etc, and have demanded a 50 percent cut in VPF, especially in the wake of COVID-19 lockdown.

Also read: One is identified, marked if they discuss caste in films: Director Mari Selvaraj

“We are expecting that by today (November 7), the producers and us (theatre owners) will arrive at a decision. Only then we can know whether the theatres have new releases or re-releases (of old films),” Tiruppur Subramaniam, president, Tamil Nadu Theatre Owners Association, said.

He also refuted rumours that theatre owners were ready to pay if the VPF was cut 50 percent, saying these issues were discussed but no decision was made.

Some of the new films expected a release in the near future are Suriya’s Soorarai Pottru (Praise the brave), Jiiva-starrer Kalathil Santhippom (See you in the battlefield) and MGR Magan (MGR’s son) starring M Sasikumar are ready to be released.

On November 6, the Tamil Nadu government had allowed the opening of theatres, with 50 percent seating arrangement beginning from November 10, days before Diwali on November 14. This marks about nine months of lockdown for theatres in Tamil Nadu.