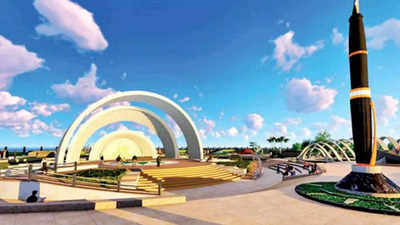 An artist’s impression of the proposed memorial of former Tamil Nadu CM, the late M Karunanidhi on the Marina Beach

It is all well to build memorials on the iconic Marina Beach for departed beloved political leaders. While DMK cadres are rejoicing over the announcement of a grand memorial for their political leader, the late M Karunanidhi, environmentalists and climate scientists question the logic and the longevity of these monuments built on the beachfront.

On August 2, the DMK-led Tamil Nadu government unveiled a major plan to construct a mausoleum for their late party chief K Karunanidhi, triggering off the debate on the impact of such constructions on the fragile marine ecology in the area. To be set up in an area spanning 2.21 acres, this mausoleum, which will be built like a fountain pen, has been budgeted at ₹39 crores.

Memorials of party leaders hold a lot of significance in the state. The leaders of the Dravidian parties visit these memorials before launching their election campaign, before filing nominations, tabling budgets or taking oaths or even during the birthdays of political leaders both living and deceased, and during the death anniversary of the leaders, etc. Or, in the case of AIADMK leader Sasikala, the visit to the memorial was to take an oath to destroy the enemies of the political party!

The memorials also have a cultural importance as, every year, thousands of tourists visit these.

It was in 1969, the first memorial was installed on the Marina, when the then DMK government built a memorial for the late political leader, CN Annadurai. Renovated in 1996-98, it is also known as the Anna Square. The memorial is situated in a complex, which includes a museum, safari park, aquarium and animal house.

In 1987, MGR too was buried on the beach, apparently because he considered Annadurai as his mentor. A mausoleum was constructed in an area spread over 8.25 acres and the memorial was again remodelled in 1992. It also contains a museum on the life and achievements of the political leader.

In 2016, when J Jayalalithaa died, she was buried near the MGR memorial, since she was considered MGR’s heir. In early 2021, a memorial was built in her name along with a museum and an artificial water fountain.

In 2017, Karunanidhi was also buried on the beach, within the precincts of the Anna Memorial, in line with the tradition of burying Dravidian leaders on the beachfront. The DMK had to move the Madras High Court to get permission. Interestingly, the Congress leaders like C. Rajagopalachari and Kamaraj were buried in Gandhi Mandapam at Adyar.

The AIADMK, which was in power at the time of Karunanidhi’s death, argued that only the CMs who died when they were in power were eligible to be buried on the beach. It argued that when Janaki Ramachandran, the former CM who had held power for a fleeting time, died in 1996, the DMK government had acted on this same rule.

Besides the politics being played out behind the former CM’s memorial at the beach, it appears that neither the DMK nor the AIADMK has taken the damage the construction of these memorials will have on the marine environment.

There are 17 statues on the promenade in Kamarajar Salai and the road falls in the Coastal Regulation Zone (CRZ)- II.

Taking cognisance of constructing memorials on the impact on the marine environment, the Madras High Court had asked once, “How long are you going to continue building memorials out of all these places. Have you almost exhausted the Marina (beach)?”.

According to the Coastal Zone Management Notification 2011, the construction of new permanent structures at the Marina is prohibited. What is permitted is the demolition and reconstruction of certain buildings Above all, the Chennai City Municipality Corporation Act, 1919 says that disposal of corpses anywhere in the city except the designated places is prohibited.

Marina is not a designated place to bury or cremate the corpses. It is evident these laws are not enforced when it comes to political leaders.

According to environmental activist Nityanand Jayaraman, the Coastal Regulation Zone (CRZ) notification came into effect only in 1991. “So, the memorials built before are not violating any rules. But some of the structures built after are clearly violating the CRZ rules,” he pointed out.

When your built-up area continues to expand, the salinity intrusion will be high. Besides, the public works department carries debris from its construction sites anywhere in the city and deposits them on the beach and the estuary, alleged Jayarama, who also believed the sharp bright lights from the memorials may affect the Olive Ridley turtles during their breeding season.

Climate change and rising sea levels pose a threat to these memorials being set up with so much care and funding. In fact, a UNESCO report titled ‘The Impacts of Climate Change on World Heritage Properties’ says, “Flooding may damage building materials not designed to withstand prolonged immersion, and post-flooding may encourage the growth of damaging micro-organisms such as mould. Archaeological sites and monuments may be at risk from flooding, particularly the eroding effect of rapid flowing water”.

Dr Saleem Khan, climate scientist and assistant professor with Tata Institute of Social Sciences said though there is no immediate threat to these memorials, in future, say in hundred years, rising sea levels may damage these monuments.

“The data so far suggests that due to sea-level rise, north Chennai and Pallikkaranai are two places that can be affected. We don’t have high resolution satellite maps to study how the sea level rise will affect the Marina beach in particular,” he added.

P I Kumaran, a Chennai-based marine biologist too echoed Jayaraman’s point. He said that the state has no base data to ascertain the impact of these memorials on the beach.

“These memorials haven’t released any wastes into the sea. It is true that people who visit these memorials dump the waste. But the place would get disturbed even if there is no memorial,” he reasoned, blaming industries and the port for discharging effluents which were destroying the marine ecosystem.

The marine ecosystem may witness changes by 5 to 10 per cent in 50 to 60 years time. But that happens naturally even without memorials. “It is hard to say that these memorials have created an undesirable or startling change, which requires immediate action,” he said.

In conclusion, the memorials may not be causing significant damage to the environment as yet. But these monuments themselves may be under threat of being submerged in the future due to the growing threat of rising sea levels.