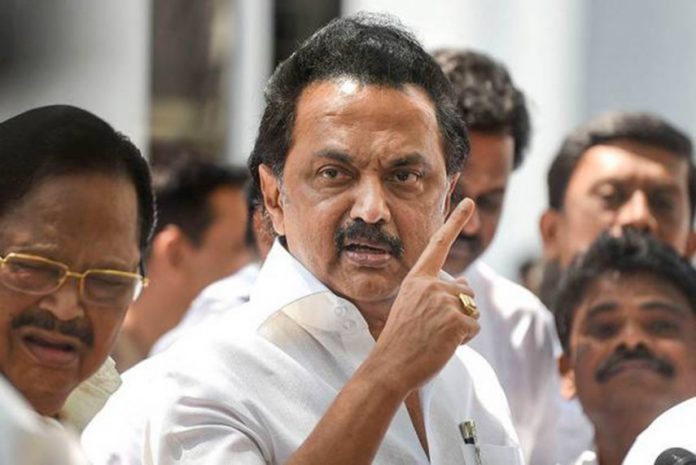 It has been a month since DMK chief MK Stalin was sworn in as the Chief Minister of Tamil Nadu.

After taking charge as CM, Stalin immediately issued orders to fulfil some of the promises made by the DMK party in their election manifesto and focussed on organising COVID relief measures as well. Staying true to the DMK style of governance of first satisfying some of their pledges made during election campaigns, Stalin gave the official seal on providing free bus travel to women and slashing the Aavin milk rate.

Under COVID relief, he has been actively organising oxygen beds, brought COVID treatment in private hospitals under a government insurance scheme and invited global tender for vaccines. Moreover, he has been announcing awards and dream houses to writers and cancelled the Class 12 state board exams besides urging Prime Minister Modi to abolish NEET, which is contentious for the state.

If you bypass the hype surrounding these grand announcements, there is one feature that is emerging about this political leader, who had been CM in waiting for decades. Stalin is acting in a way that the former CMs and AIADMK leaders, J Jayalalithaa, O Panneerselvam and Edappadi K Palaniswami had never done. His style of functioning, which involves mixing with people on the ground to take stock of the situation, has earned him a lot of praise from many quarters. Having made this observation, the fact remains that it is too early to judge him.

However, the challenges he faces in his first month in power seems to resemble what his late father M Karunanidhi, the DMK patriarch had to undergo in his time.

On the party front

Having won from Saidapet constituency in 1967, MK Karunanidhi took charge as a CM on February 10, 1969 following the death of former CM and his mentor CN Annadurai. He gained the position amid a lot of in-fighting and dissatisfaction among other leaders like Navalar Nedunchezhiyan in the party, who were angry with Karunanidhi. There was so much discord that the Opposition party, the Congress had expected the DMK to split at that time.

In fact, Karunanidhi had reportedly referred to the Chief Ministerial post at that time when he took charge as a ‘Crown of Thorns’.

Interestingly, Stalin too has come to power when his leadership was under question. He lacked the oratorical skills of his father and was seen as incapable of tackling backdoor political machinations to bring down the AIADMK following Jayalalithaa’s death. When he assumed charge, Stalin said that instead of being a CM, he considered himself as a “frontline worker”.

When Karunanidhi became CM, he said his name itself had become a bad word. However, during his swearing in, Stalin  introduced himself as ‘Muthuvel Karunanidhi Stalin’, instead of the customary ‘MK Stalin’, thereby making his father’s name from a ‘bad word’ into ‘great name’. The DMK cadre regard this incident as a scene from a feature film, probably scripted by the eloquent, emotional screenplay writer, Karunandhi.

Another trivia reveals that both their swearing-ins took place at Raj Bhavan, the Governor’s bungalow in a simple manner with a small crowd.

On the disease front

If the new CM Stalin is battling the  COVID-19 pandemic and involved in implementing relief measures, his father Karunanidhi had to fight to bring down the smallpox disease in TN during his first month in power.

According to government records, in 1963, a total of 2,559 people died due to smallpox. The vaccination campaign to curb the disease flagged off in that year itself. However, it was during the DMK’s regime, the vaccination drive was taken up more efficiently. While other states gave up on the vaccination drive half-way, Tamil Nadu pursued and continued to inoculate its people. Because of this, the state was relieved of the disease and became a role model to other states.

The state was also a pioneer in producing ‘calf lymph’ (‘ammai paal’ in local parlance), which was produced in King’s Institute. Due to these measures, in 1967, the number of people dying because of smallpox dropped to 71. In 1969, the number was zero.

Similarly, decades later, Stalin ordered for oxygen beds and pushed industries to produce oxygen. He also provided incentives for the companies and invited global tenders for vaccination. Stalin also urged the Centre to provide permission to operate the HLL company in Chengalpattu district to produce vaccines. Due to his lockdown measures, the total positivity rate of COVID in Chennai and other 27 districts have reduced drastically.

The year the late Karunanidhi became CM, the state witnessed one of the worst droughts. In the first Assembly meeting, a resolution was passed demanding the ‘Union Government’ to disburse funds for drought relief. The state finance and agricultural ministers dashed to New Delhi to process the demand. Fortunately, the Centre had accepted the demand and provided 20,000 tonnes of rice.

Karunanidhi had a blow hot, blow cold relationship with the Centre back then. The then Prime Minister Indira Gandhi had viewed Karunanidhi as a leader who was always at loggerheads with the Centre. She had found him “confrontationist”.

However, in order to assure the Centre, Karunanidhi had conceived a slogan ‘Uravukku Kai Koduppom, Urimaikku Kural Koduppom’, which meant – ‘Let us give our hands to relationship and raise the voice for our rights’. He was well aware that he needed the Centre’s support at any cost.

Today, Stalin appears to have turned the slogan on its head and demands the rights of the state first and gives importance to maintain the relationship with the Centre as a secondary thought. His recent move to change the form of addressing the ‘Central Government’ as ‘Union Government’ has not gone unnoticed in political circles.

Also, Stalin’s style of going ahead and inviting global tenders for vaccines without consulting the Centre has further strained the relationship.

Also read: How TN topped ‘no poverty’ SDG goal after a year’s lockdown?

VMS Subagunarajan, a Dravidian ideologue told The Federal that the main difference between the first month in power between Karunanidhi and his son Stalin was that the power transferred from Annadurai to Karunanidhi, while Stalin got the CM post after an hard-won election.

“The problems like smallpox were common for the entire country and it was not that just that former TN CM Karunanidhi fought against it. The main challenge he had was bringing the party under his control and to prove himself as an able administrator of the party and the people,” he added.

Whereas the challenge Stalin faces today is not from the party but from the people. “He had to prove himself as an able administrator of the state,” asserted Subagunarajan.

“It was DMK, which introduced the tradition of when assuming power to make the first signature on any of the schemes they had promised in their election manifesto. This is just a form of assurance to the people that they are sticking by their promises. They work on what is most important and  implement that scheme first when they assume power. This is done after discussions with the people they meet during election campaigning,” said Prof Rajan Kurai Krishnan, School of Culture and Creative Expressions, Ambedkar University, New Delhi.

According to Prof Rajan Krishnan, the relationship with the Union government is going to be Stalin’s biggest challenge. “It is a fact that the governments are located in States. The Centre is basically a union of states. Addressing the Central government as ‘Union Government’ seems to be unacceptable by the current dispensation. How DMK and Stalin are going to handle this strained relationship is what we need to watch in the coming days,” he added.

Maharashtra BJP promises 5 crore jobs in 5 years, houses for all by ...