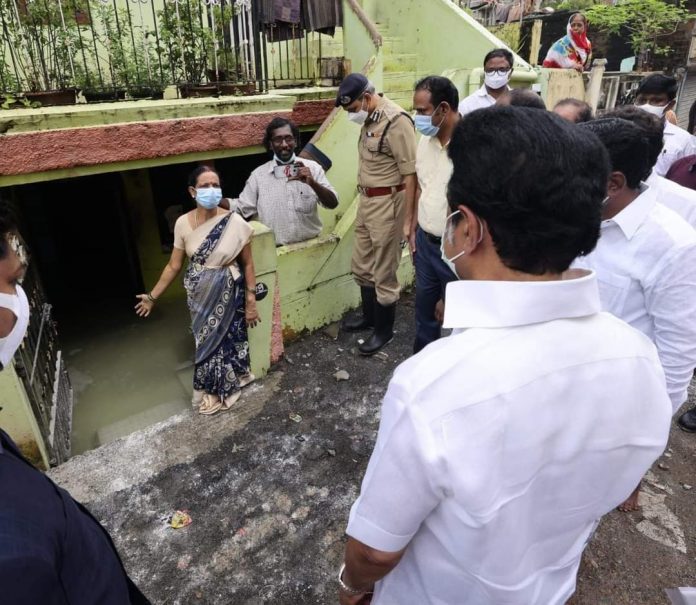 Elevated roads are one of the key reasons behind waterlogging in most parts of Tamil Nadu, especially in Chennai, according to activists.

This practice of increasing the height of roads continues despite an order from the state chief secretary instructing the highways department not to enhance the road surfaces at any cost in the corporations, municipalities and town panchayats in the state.

In May this year, chief secretary V Iraianbu had issued an order to the Highways and Minor Ports department to adopt the milling process before relaying new roads to ensure road surfaces are not enhanced. (Milling is a process in which a portion of the top road surface is removed by machinery before being relaid).

“Increasing the surface of the roads will affect the nature of roads (footpath, stormwater drains, etc.) Moreover, the roads under the Chennai Corporation limits are already laid with two or three levels of dense bituminous macadam (DBM). So, it is redundant to lay the road with another level of DBM. After milling the old road, the new road should be laid to the same height. This will prevent water getting into the houses,” stated the order.

The order was issued after a series of court cases, including public interest litigation filed by a resident of Chitlapakkam, Chennai in 2018 and a writ petition filed by Mayiladuthurai Chamber of Commerce, Mayiladuthurai district in 2020. Hearing these cases, the Madras High Court issued a bunch of directions which are however not being implemented.

This is largely due to high levels of corruption. Jayaram Venkatesan, convenor of an NGO, Arappor Iyakkam said, “Firstly, the highest level of corruption happens in laying the bitumin. The extent of the bribes seems to depend on the density or the height levels quoted to lay the bitumin in the tender. Generally, the tenders are invited when the bitumin rate is high and executed when the rate is low. The corruption starts here.”

In 2015, Arappor Iyakkam uncovered a scam in one of the tenders of the Chennai Corporation.

“The roads should have been laid at a 90 mm height, out of which 50 mm should have bitumin macadam while the upper layer has 40mm. This is the standard practice. So next time when you relay the road, the 40 mm upper layer is milled and the road is relaid with the same height. Whereas in 2015, the Corporation invited tenders for laying the roads at 190 mm which was abnormal. This kind of height would increase the chances of water flowing into houses,” pointed out Venkatesan.

In places where the awareness among citizens is high, milling of roads is properly carried out but in the outer areas of the city, the roads are relayed overnight without milling. So, in just a night, crores of money is swindled, alleged Venkatesan.

“In relaying concrete roads, the old roads should be broken down instead of milling and then the new roads must be relaid. When they relay the new road above the old one without breaking the existing concrete road, the height increases which leads to flooding during heavy rains,” said Venkatesan.

S Ayyarappan, president of the Trichy-based Road Users Association, said that the contractors and corporation officials bypass the chief secretary’s order by taking refuge in claiming they are undertaking maintenance work on the roads.

Also read: A day in the life of a Chennai resident – sick and begging for water and medicines

“When we ask about why they relay the roads without milling, they say that the rule must be followed only when relaying new roads and not for maintenance and patchworks. But in Trichy, relaying of roads such as the City Theatre road, Thillai Nagar etc., can be clearly seen as not being patchworks,” he said.

“The government should convert most of the Corporation roads into main roads and  bring them under the state highways department,” he suggested.

“We haven’t touched any old roads till now since they are in a good condition. We cannot generalise that the road height has caused floodwater to enter the plots. This needs to be studied on a case-by-case basis. These kinds of problems may occur in the parts which have been newly incorporated in the Corporation limits. In fact, we are trying to decrease the heights of roads in the areas wherever possible,” he affirmed.