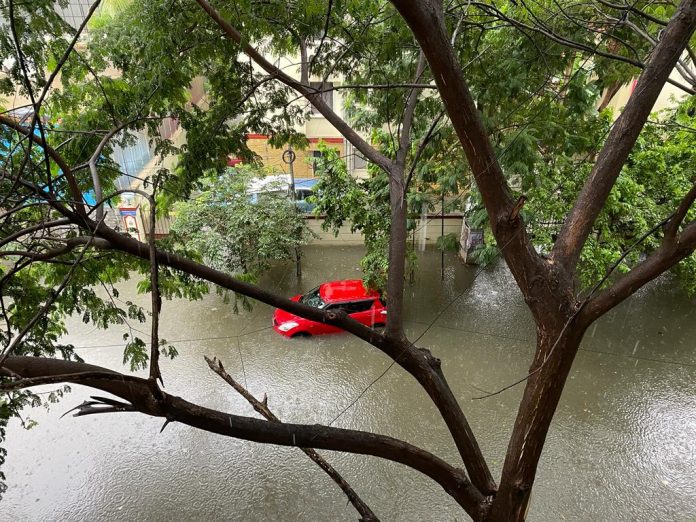 Almost 100 areas in Chennai were still inundated with water on Saturday.

It has been a tough day for G Gomathi Sankar, the 69-year-old resident of 18th Avenue of Ashok Nagar in Chennai. For, rainwater remains stagnant for the seventh consecutive day in his locality even though it has been more than a day since rains stopped in the city.

Unable to step out of his house due to the 3 ft-deep water on his street, he and his family members have been managing with the essential items they had stocked at home, but which are likely to run out in another few days.

As the municipal corporation officials are not responding to repeated calls and messages, he and other residents of the locality are struggling to decide what to do next.

“I have been sick and suffering from diarrhoea since November 8. Even though I managed to consult a doctor virtually, I had no means to buy medicines as neither could I step out of the house nor are people willing to deliver at home because of the knee-deep water outside. After repeated requests and shelling out three times the cost of medicines, a person helped me buy them yesterday,” the elderly man said.

Even drinking water is running out for the family, which resorted to begging water-can sellers to deliver to the house.

“I have been calling and messaging corporation officials, but have received no response till date. The local MLA assured us of action, but nothing has changed on the ground. If the situation continues like this, we will have no other option but to stage a protest,” Sankar added.

A resident of Srinivasa street in Mandaveli, Siddarth Prabhakar said that sewage water had flooded their street and even though corporation workers had been working to drain it, nothing had changed on the ground. “On Thursday, rainwater entered the house. Though it has receded a bit, the sewage has been posing a threat,” he added.

These streets are among the almost 100 areas in Chennai that are still inundated with water on Saturday.

Three subways – Vyasarpadi subway, Madley subway and Kakkan subway – and several other roads including the service road of beach road, TTK road and Arunachalam road are closed for public as they are still waterlogged and pumping out of water is going on.

According to corporation officials, “as many as 93 areas including Thiru Vi Ka Nagar, Jawahar Nagar, Seethamal Colony and parts of T Nagar, are still inundated and they have been using as many as 620 motor pumps to drain out the water. We have also deployed 500 workers from other local bodies in addition to 20,000 Greater Chennai Corporation workers to carry out mass-cleaning in the city.”

The official also said they had distributed food to 4.40 lakh people in the city and set up 68 relief centres.

An official from the forest department said they had been receiving about 60 to 65 complaints a day to capture snakes in the last couple of days and they rescued as many as 72 snakes.

“Earlier this week, we were getting 30 to 35 calls per day. But the number of calls has increased. We have deployed a separate team to carry out the rescue operations. A large number of calls have been coming from areas like Madipakkam, Nanganallur, Taramani, Perungudi, Avadi and Ambattur. The rescued snakes have been released in reserved forests,” he added.

Meanwhile, Tamil Nadu health minister Ma Subramanian has inaugurated medical camps in Chennai. According to him, the state government has targeted to set up 5,000 medical camps including 1,500 mobile medical camps across the state but the actual number of camps has crossed 6,000.

“In the last four days, about 3.54 lakh people have utilised the camps across the state and COVID tests were conducted on 43,500 people at the facilities. COVID vaccinations are also being provided at the camps,” he added.

He further said that the state government has stocked up Rs 170 crore worth of medicines that are required for another three months.

Union minister L Murugan who visited rain-affected areas in Chennai said the central government has been giving all sort of assistance in this critical period and the situation could have been averted if the state government had acted wisely.

Heavy rains are, however, still lashing Kanyakumari district and several pockets were flooded with rainwater. The meteorological department has predicted heavy rainfall in Kanyakumari and Tirunelveli districts for the next 24 hours.

The state government has also constituted an advisory committee on mitigation and management of flood risk in Chennai. The 14-member panel would be headed by a retired IAS official, V Thiruppugazh, and would make suggestions on flood control methods and design stormwater drains to reduce the impact of floods.