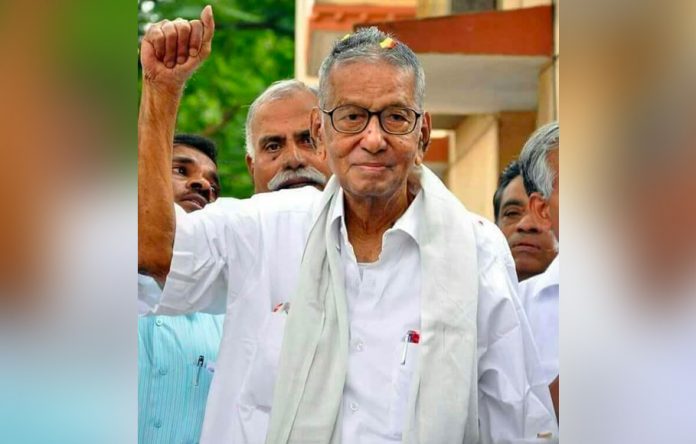 Four years in jail before Independence. Four years after Independence. Three years on the run. This was once the life of N Sankaraiah, one of the last living freedom fighters in India.

Born on July 15, 1922, in Kovilpatti in Thoothukudi district, Sankaraiah turns 100 on Thursday.

In 1931 a nine-year-old Sankaraiah attended a rally condemning the execution of Bhagat Singh – his first political activity.

Sankaraiah studied history at The American College in Madurai. He was the secretary of the Madurai Student Organisation, and in that capacity had invited Netaji Subhash Chandra Bose to his college to deliver a lecture. For that he was arrested in 1941, just 15 days before the final exams of his undergraduate course.

Birth of a Communist

Also read: Why political parties are running away from Tamil TV debates

After spending 18 months in jail, Sankaraiah was released in June 1942. Following the release, he became a full-time communist party worker.

In 1946, during the Royal Indian Navy Mutiny, Sankaraiah organised several demonstrations in Madurai. It was against this backdrop that he, along with other communist leaders such as P Ramamurthy and KTK Thangamani, were arrested in the ‘Madurai conspiracy case’.

“We were released a day before Independence. A special judge came to the prison at 6pm and said our case was a forged one, and we were released,” Sankaraiah once told an interviewer.

After his release, Sankaraiah got married to Navamani in September at the party office in Madurai. It was not only an intercaste marriage but also an interfaith one.

“Their children and grandchildren too have gone for intercaste marriages. A mini samathuvapuram [a place where all castes live together in harmony] exists in his house,” G Ramakrishnan, former state CPM chief, would later write.

In 1948 the Communist Party’s second conference was held in Kolkata. The then Nehru government banned the party after the conference got over. Many of the leaders were arrested in Kolkata but Sankaraiah escaped. He spent the following three years on the run.

“Of the 32, only VS Achuthanandan and I are alive today,” Sankaraiah said.

In 1967 the CPM contested the Tamil Nadu assembly election and Sankaraiah won from Madurai West. He was elected to the assembly in 1977 and 1980. He was the first editor-in-charge of Janasakthi, the CPI’s Tamil daily, and the first editor of Theekkathir, the CPM organ. He served as the party’s state secretary between 1996 and 2001.

During the 1977-1980 MGR regime, Sankaraiah urged the government to open ration shops in every village of Tamil Nadu. MGR accepted the proposal. However, finance minister Nanjil Manoharan said that, since the governor’s budgetary speech had already been published, the demand could not be included.

“No problem. Just paste this demand separately at the end of the budgetary speech,” Sankaraiah reportedly said, and the idea was accepted.

Sankaraiah also maintained a good relationship with the DMK patriarch Karunanidhi. In jail, Sankaraiah used to read Maxim Gorky’s novel The Mother. When Karunanidhi translated the novel in poetry form, he asked Sankaraiah to write the preface.

Sankaraiah still believes that protecting and strengthening public sector companies is the only way to protect the poor. He encourages young people to read the works of Marx, Engels and Lenin.

“Communists should always be in touch with the people. Each and every communist should reach at least 300 families and help them solve their problems. They should convert their political struggle into an ideological struggle to fight against the communal forces,” Sankaraiah once said.

What Tangedco can learn from NGOs about call centre services