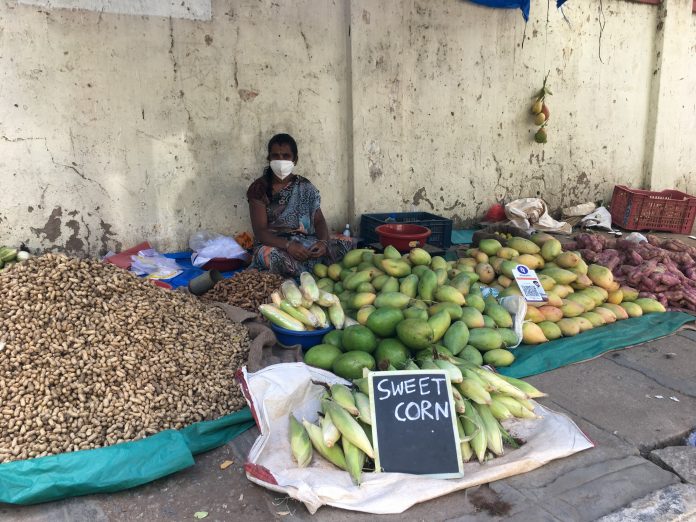 Salamma became a street vendor after her husband lost his driver's job. But she barely makes enough profit in the few hours she is allowed to set up shop. Her family leads a hand-to-mouth existence like most of the urban poor

Salamma, in her late 30s, sells vegetables sitting on the roadside in GM Palya in Bengaluru. A native of Dharmapuri, Tamil Nadu, Salamma turned from being a homemaker to street vendor after her husband lost his driving job post the first lockdown in 2020.

With a lockdown in place, Salamma can sell vegetables only between 6am and 10am. On a hard day, she finds it difficult to even make a profit of ₹250. And if she’s allowed to sell for a longer time, say up to 2pm, after much pleading with the beat police, she may earn another two hundred rupees, Salamma said.

Of this, she has to pay ₹100 for the auto to move the goods daily from home to the junction where she sells the vegetables. After her husband lost his job last year, Salamma and her husband found it difficult to pay the house (one room) rent of ₹4,500 a month. With three months of dues, they were forced to vacate the place. Today, her family settled for a bigger house to accommodate her vegetable stockpile. But she moved from a concrete-roofed house to a tin-roofed one.

Also read: Not just Bengaluru, COVID cases spike in other Karnataka districts too

“Life was a bit easy and happy until March last year. But now I have to struggle every day. There are days when I barely make ₹150 as profit and I cry every day thinking when all this is going to end,” said Salammma, with tears welling up in her eyes.

With their family financial condition worsening and vegetables perishing and leading to losses without sales, her loan burden has increased. Salamma has taken a loan of ₹20,000 and ₹5,000 from two different money lenders at 15 per cent and 20 per cent interest rates respectively. If she fails, the interest compounds. For the first loan, she has to make a daily repayment of ₹200 and for the other she has to make a weekly payment of  ₹600.

“While my daughter got admitted to a private school through the Right to Education quota, I wanted to put my son too in a private school. But now, as I cannot afford to pay for their education, I haven’t sent him to school,” she said.

Going to the market every day and coming in contact with customers daily, their risk of catching COVID is high as well. But vaccines are out of reach for them. Having liver complications, the doctor has advised her not to take it. And her husband is hesitant and they do not know how to register and book the slot through the CoWIN platform.

The Karnataka government recently announced a financial package of ₹2,000 for street vendors, but only those who are registered under the Atma Nirbhar scheme are eligible to get the amount. As she had not registered last year, she’s not a beneficiary. Nor has the PM Svanidhi scheme announced to provide collateral-free loans of up to ₹10,000 as working capital for one year, reached her. Being new to street vending, she’s not part of any formal organisation that can fight for her rights.

Salamma is not alone in her battle.

A lot of urban poor live from hand to mouth, with many skipping at least one meal a day to tide over the crisis. In front of the government’s Indira canteen, from auto drivers to cab drivers and Dunzo employees who deliver food and other items to customers, stand in a queue to get a free food package. It shows the distress and the impact the second wave of the pandemic has had on the poor.

“I deliver food to customers on a daily basis. But I can’t manage on my own. I stand in line for free food. After the pandemic, a lot of people who lost other jobs joined the delivery business and our individual income has dropped,” pointed out Akshay, a delivery business executive.

People struggle without food nor aid

In Kariammana Agrahara, an informal settlement overlooking high-rise buildings in Bengaluru’s tech hub area, several youngsters who once worked as drivers, housekeeping professionals, security guards, many of who lost jobs post the first lockdown last year, were sitting outside a shut shop idling time talking with each other. It’s half past noon and many have no means to eat their lunch. While some aid flowed in during the first lockdown, all that has dried up during the second wave.

“No job, no money, no ration and no food. Every day we wonder who to ask money from for the next meal,” said Junaid Ahmed.

Ahmed, 25, a native of Assam, moved to Bengaluru in search of a job. He had worked as a housekeeping staff in Accenture, he claimed, adding that it’s been a year since he lost his job. “I am getting no jobs. How long can we survive without money? I haven’t sent money to my family members in Assam. The house stands damaged in the recent floods,” said Ahmed.

Ahmed and his fellow mates have mobile phones, but they do not have money to recharge their phone and to even talk to family members or watch entertainment content online. “The government officials come to test us (COVID), but not for vaccination or to give any financial aid or supply food. That is our need,” Ahmed added. “Many of us may not die of COVID. But we may die of hunger if this lockdown and unemployment distress continues,” he pointed out bitterly.

Munzair is another migrant living in the same settlement rents out shanties. According to him, half the shanties are lying empty as many have left for their native villages, while the rest have been unable to pay their rent. “I have asked them to pay half the rent and pay the rest when they get money. But for how long can I be generous? I have to pay the landowners,” he said.

The all India Central Council of Trade Unions (AICCTU) which is fighting for the rights of poor street vendors, migrant workers, domestic help among others, have urged the Karnataka government to increase the COVID support package to ₹15,000 and start an urban employment guarantee scheme to protect the interest of these people.

The AICCTU statement said, “The package announced is really insufficient. There’s no relief to the poor in the form of a waiver on rent, electricity, water bills for loans availed during this period.”

“The abysmally low cash relief offered in the COVID second wave support package is an assault on the dignity of people,” said the AICCTU.

2 firms with K’taka CM’s grandson as director got over ₹...