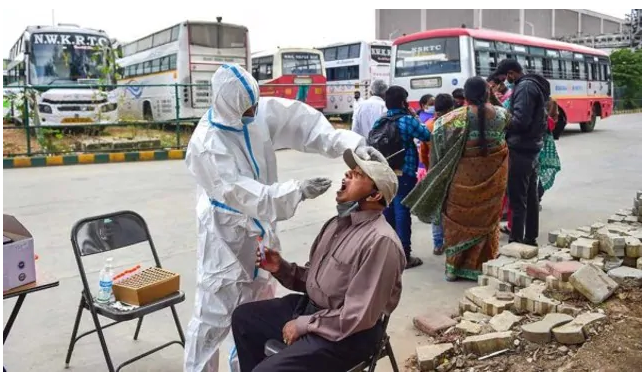 Karnataka has left Maharashtra behind in case fatality rate and total deaths for the first time since the COVID second wave began.

About a month ago, Karnataka had a test positivity rate of 7% with only 61,653 active cases. With the second wave raging, the state has been witnessing 35,000-50,000 cases a day in the past two weeks.

Also read: COVID spread deadlier in southern Maharashtra than rest of the state

Karnataka’s death count numbers were also high on Monday as the state reconciled the mismatch in data and accounted for some of the deaths occurred in April.

The steep rise in COVID-19 cases is not limited to the Karnataka capital anymore as the coronavirus is gradually spreading to other districts in the state, including Mysuru, Mandya, Ballari, Tumakuru, Kalaburagi and Hassan.

Even in Bangalore, hundreds of requests pour in on a daily basis seeking oxygenated beds and ICUs beds. As per the civic body’s data, there was not a single ICU or HDU bed available on Tuesday.

Meanwhile, Karnataka High Court on Tuesday pulled up the state government for police excesses in the wake of lockdown restrictions and asked the police to restrain from using force to restrict the movement of people.

With lockdown hitting people’s livelihood hard and cops using force to implement a strict lockdown, civil society groups and human rights organisations have appealed to the government to restrain from harassing and beating up people.

As per the regulations framed by a high-power committee, headed by Chief Secretary P Ravikumar, people were not allowed to take out vehicles on day 1 of the lockdown. Police wielded lathis and abused hapless citizens and even seized their vehicles at several places in the state. People had no choice but to walk long distances to buy essentials. The government, however, relaxed the order later, allowing people to use vehicles for short distances.

“Contrary to videos doing rounds on Social Media, @BlrCityPolice has been strictly advised to only take action strictly as per law, in case if anybody violates lock-down guidelines. They have been advised not to use any kind of force in this regard,” Bengaluru city police commissioner Kamal Pant tweeted on Tuesday.

Meanwhile, DG & IGP of police Praveen Sood clarified that there was no bar on using vehicles to go short distances, like going to the neighbourhood stores to buy groceries and vegetables.