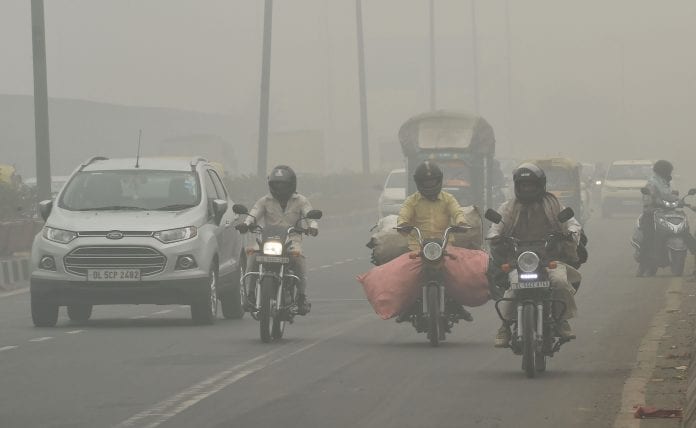 Diwali fireworks may be over, but the smoke it created is still creating havoc. It has been three days, but Delhi’s air quality is hovering around 450, which is still “severe”.

Amid the worsening AIR Quality Index (AQI) levels*, doctors have warned that the increasing pollution levels could trigger another COVID wave, mostly because it multiplies the risk of infection. Besides, it could hinder brain development in children, as per a report in ANI.

As per doctors, pollution and COVID are a deadly combination and hospitals are packed with patients complaining of wheezing and other breathing issues.

“With winter and fog, COVID infections might increase as there’s a risk of the virus being entrapped in droplets in the environment with cold air above us,” Dr Arunesh Kumar, Head of Department (HOD) of Pulmonology at Gurugram’s Paras Hospital told ANI.

According to Arunesh, COVID and pollution are a deadly combo and equally dangerous.

“Delhi’s average AQI, barring a few months of total lockdown, is never normal. We always breathe polluted air. Most of the time it’s about the duration of pollution which matters rather than the acute surge. In Delhi-NCR we’re more prone to be awake when there’s a trigger as people feel that suddenly their breathing problems get worse. But the fact is our AQI is never normal,” he said.

And children bear the brunt.

“Everyone will suffer, but the young suffer the most.  People are complaining of headaches, breathing problems. Young children are very vulnerable and the rising pollution level can affect their brain development, Dr Naresh Trehan, Medanta Hospital Chairman and MD told ANI.

According to the Centre-run System of Air Quality and Weather Forecasting And Research (SAFAR), the air quality could be severe in the coming days as well.

Meanwhile, the Delhi government on Saturday deployed water tankers across the city to sprinkle water on roads to stave off dust, one of the major contributors to air pollution.