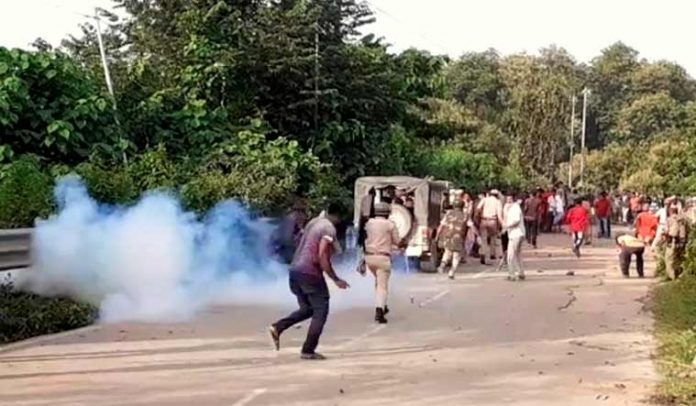 The essential supplies to Mizoram have been affected since the border tension with Assam flared up on July 26. PTI File Photo

Despite the intervention of Union Home Minister Amit Shah and an agreement reached between Assam and Mizoram governments to resolve the border crisis, the ground situation remains volatile as vehicles carrying supplies to Mizoram are stopped at the border following an undeclared “blockade”.

Six Assam policemen were killed and many people were injured from both sides in a sudden flare-up on the inter-state border on July 26.

The Assam government said in a notification on Thursday (July 29) that all vehicles entering Assam from Mizoram will be checked for “illicit drugs.” It followed an earlier advisory, also issued on July 29, where the state government asked its people not to travel to Mizoram as any threat to their personal safety cannot be accepted.

Also read: Border on the boil: Assam won’t give an inch of land, says CM

The Assam government has said that within two months, 912 cases have been registered and 1,560 persons arrested for their involvement in the supply of seized illicit drugs.

Senior Assam Police officer GP Singh tweeted that the government was continuing its “offensive against drug cartels operating from Mizoram and beyond.” He appealed to people to cooperate in the interest of the “Gennext of our country.”

“During the drive against illicit drugs, it has been observed that most of the drugs were routed through Assam via Mizoram from across the border,” said the Assam order, adding this “trafficking of illicit drugs via Mizoram causes great concern and threat to society”.

Following violence on the Assam- Mizoram border resulting in the death of six police personnel, local civilians have resorted to an economic blockade to the land-locked Mizoram. National Highway 306, the key route to facilitate the flow of supplies, has been blocked. Though people on the Assam side have relented a bit, the state police are not allowing vehicular movement.

The “blockade” started with a bandh called by various civilian groups, including the influential farmers’ group, the Krishak Mukti Sangram Samiti, headed by firebrand Assam MLA Akhil Gogoi. This is despite a meeting between the chief secretaries of both states and another with the Union Home Secretary on Wednesday (July 28) where it was agreed to resolve the issue amicably.

However, in Cachar’s Lailapur town on the border, the Assam police and their elite commando force, the Black Panther, are not allowing vehicles to pass, maintaining that the situation was dangerous. “It’s like a state-sponsored blockade,” said an eyewitness.

Over 20 trucks loaded with supplies have been parked close to the Assam border. There are other stranded vehicles with medical supplies. “The police personnel, apart from not allowing those who want to cross to Mizoram, also warn people that they will be on their own if they cross over,” said a civilian. Most truck drivers are from outside the region, and say the crisis is causing a lot of inconvenience for them.

Sources said the police are also asking the truckers to park their vehicles away from the border to avoid any controversy.

Rail tracks damaged at the Mohammedpur and Ramnathpur railway stations in Hailakandi district have further affected the flow of essential supplies to Mizoram. This is the only railway line linking the Bairabi station in Mizoram. Superintendent of Police Ramandeep Kaur said the damage to the railway line was being investigated.

A team of Assam police, including officers from the CID, have left for Delhi to probe the role of K. Vanlalvena, Rajya Sabha MP from Mizoram, in the border violence. This came after the MP told the media that “more than 200 policemen entered our territory and pushed back our policemen from their posts and gave firing orders before we fired back”.

“They are lucky that we didn’t kill them. If they come again, we shall kill them all.”

GP Singh, Special DGP, Assam said a state police team, including CID officers, is leaving for Delhi to take action relating to the “conspiracy” behind the incident following the media interview of Vanlalvena.

The Mizoram government has expressed its displeasure over Singh’s remark. “Your tweets on Hon’ble MP of Mizoram Pu K. Vanlalvena appear to be unbecoming of a government servant of your level. Please respect the privilege of the people’s representative such as an MP who has been performing his duty under oath,” said Robert Romawia Royte, Mizoram’s Minister of Sports & Youth Services.

The Assam Police have announced a reward of ₹ 5 lakh for information leading to the arrest of individuals involved in the killing of the Assam Police personnel on July 26.

The Assam government issued an advisory on July 29 advising people of Assam not to travel to Mizoram due to the prevailing situation, and also stated that the people of Assam living in Mizoram should exercise utmost caution.