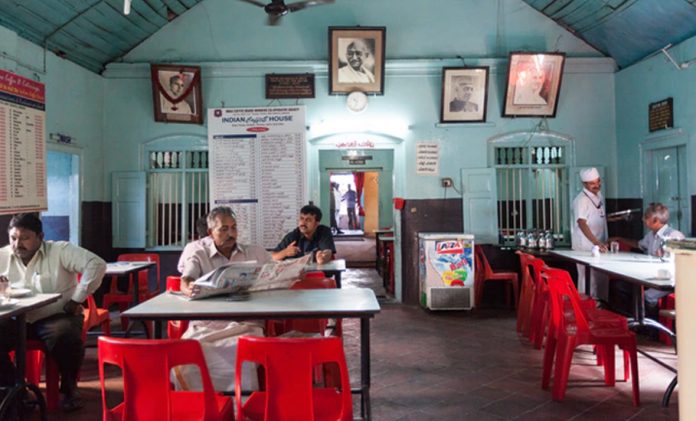 The thing about coffee at Indian Coffee House is that it smells better than it tastes, say some

It looked like I would be tamped down to Thrissur for a few more days. So it was best I got a broadband connection. I pulled on my kneecaps and walked to the BSNL office near the corporation building at the town centre.

The traffic was heavy because the lockdown had been lifted for the day, a Friday. I asked the guard how to go about a broadband connection, and he said, ‘Divisional Engineer,’ like it explained the whole universe.

‘Where does he sit?’

‘Right next to the gents’ toilet.’

I found the DE in a large square room behind a computer. Behind him was a long rectangular photograph of Gandhi. Gandhi’s biceps were well developed, and he had six-pack abs. Above Gandhi’s head was written: The customer is the most important visitor on our premises. Treat him well.’

The DE was courteous and friendly. ‘Installation and modem would cost Rs 3,000, then Rs 600 monthly.’

‘But we are better. And we are Indian. And quality is our motto.’

‘Let me think about it.’

I stepped out into the crowd and realized I was late for my meeting with Hari, who said on the FB he liked what I wrote. He was in town and could we meet, he had asked. He had to come from Iringalakuda, a temple suburb, and we had planned to meet at the Indian Coffee House near North Bust Stand.

I waited by the barred counter of Coffee House. You could order coffee and take it outside and drink. Hari had already arrived though we did not know that. We looked at each other and spoke on the cell, and then we realized who we were and waved at each other. Hari was plump and looked jolly. He wore a black corduroy jacket over his T-shirt, and it was 32 degrees in the shade. I sweated in my kneecaps and red Nylex shorts, my uniform for Thrissur.

Also read: In rain-soaked Thrissur, tea with greatest translator in the world

‘The thing about this coffee is that it smells better than it tastes.’ Hari seemed happy at the betrayal. ‘When I was a child in Chennai, my family used to have a restaurant in T Nagar. Devi Vilas. My uncle used to begin making coffee at around 4 in the morning. The cows would dilate their eyes at the smell and the buffaloes would dance. Now that was coffee.’

‘The restaurant? No, a Saravana joint came up next door and we went bust.’ He laughed. It turned out Hari could laugh through a lot. Years ago, he was diagnosed with blood cancer. He got out of it, but there was a relapse some 7 years later, and they had to remove his salivary gland.

We had made our way to the Elite Super Mart next door. Hari went around shopping. When he returned, he waited for his turn at the counter. ‘I have brought something for you. I will show you when we get out.’

‘That’s nice,’ I said, thinking why BSNL was so expensive.

‘But where can we drink? Shall we hire a room?’

‘By taxi. I have my favorite driver Nandu at the wheel. He is the Michal Schumacher of slow driving, and a philosopher.’

‘Well, we could drink in the taxi as Nandu drives us around the town, ’ I said.

‘Why didn’t I think of that? I will get the cups.’ Leaving the trolley in my keep, Hari went in and came back with four cups, two black and two pink, two bottles of water, and a couple of cranberry juices. I thought about BSNL’s and its leading salesman.

Hari called up Nandu, and a cute red Mahindra taxi rode up. Inside, it was a bit like a London cab, with a lot of leg space. We put most of the stuff in the back, except the cups and the water and the juice. Hari pulled out a white towel with a green and red border— the kind that Indian politicians and bureaucrats drape over their chairs — and placed it between us in the back seat. ‘Just in case.’

‘Here,’ Hari pulled out the Denzka, which came in a cylindrical aluminium flask.

‘I will take the town by the back lanes,’ Nandu said, ‘ you guys have a good time.’

‘Nandu is a great philosopher,’ Hari said, ‘just like me.’

‘You are a philosopher?’

‘From Osmania University.’ Hari poured out a large shot of the vodka. ‘I cooked up quotes and attributed them to Kierkegaard and Schopenhauer. I went berserk. They passed me.’

‘A great philosopher, and the only Vietnamese correspondent, in Thrissur. Hari writes for Vietnam News from Thrissur,’ Nandu said.

‘Oh, now I sub for them sitting here. When I first went there I used to write a humor column called Dragon Tales.’

‘They were crimes against humanity.’ Hari laughed.

‘How did you reach Vietnam?’ I asked. Now, that BSNL…

‘From Mauritius. Naturally, after my Kierkegaard, I had to help tend a bar. And I went to Mauritius and managed a restaurant for a lady who turned out to be a little crazy. So I flew to Vietnam.

‘You two back there go easy on noise, because if the cops stopped us, it would be trouble.’

‘We have been very quiet. Anyway, there’s no law against drinking in a cab.’

‘Anything can be made illegal in these times.’

Nandu steered the car into a lane that then turned into a dirt track leading to paddy fields with a blue hill in the distance like a puff of cloud, and a stream on one side where two tight-bodied kids, stripped to their briefs, were angling.

We stopped the car. The Denzka laughed.

The kids turned around and said, ‘You guys are disturbing the fish.’

‘This illness of yours, I said, ‘was it in Vietnam or Mauritius?’

‘In the US. I got married in Vietnam and she got a PhD scholarship in anthropology, and we went, the two of us and Shiv. Shiv could then speak English, Vietnamese, and Malayalam. I taught him Malayalam.’

The BSNL is so expensive, I thought. And that Gandhi….

Nandu came back somehow onto a tarred road, just in time for an ambulance to scream its way past us.

‘Did he say, “said Death to the silent scythe?’” I asked.

‘I think so, he is a great reader of Jose Saramago.’ Hari said.

‘I know Thrissur like the back of my palm.’

We were quiet for a while.

‘You guys finished with the Denzka?’ Nandu said. ‘Because it is time the Vietnamese correspondent got back.’

‘Sure, you could drop me near the Museum and I will walk back home.’

‘He is running late, ’ Nandu said.

‘Drop me at the museum, and I will walk back. Why is Hari running late?’

‘He has to bathe his brother.’

‘My brother is chair-bound,’ Hari smiled. ‘That’s why I am back here in Thrissur.’

‘Like flies to wanton boys are we to the hogs.’ Nandu said.

‘I said hogs,’ Nandu stopped the car in front of the Museum gates.

‘Let’s take a photograph,’ Hari said. ‘ For the record. For history.’

We posed, leaning on the bright red car, though the bonnet was burning.

A small crowd of children and men gathered around us.

‘They are shooting a film,’ a boy said.

We stood before the car, drunk, the masks off, the sun hot in our face, waiting to pass into history.

(CP Surendran’s novel One Love, And The Many Lives of Osip B is now available on Amazon and Kindle across the world.)