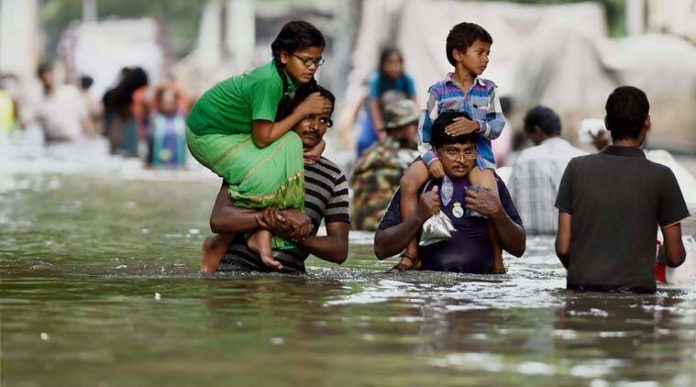 On December 30, Chennai, like any other Metro, was preparing for ushering in the New Year when it encountered a nasty surprise: Heavy downpour caught the city unawares and many parts of the state capital witnessed flash floods. The traffic was thrown out of gear and three people, including a 14-year-old boy, were electrocuted.

A day later, Chief Minister MK Stalin wrote a letter to Union Home Minister Amit Shah asking for financial aid to set up new early warning weather radars. The meteorology department too was caught by surprise and they agreed sheepishly that they failed to predict the event as the atmospheric build up along the coastline of Chennai was sudden and unexpected.

Earlier in November, the state saw widespread rains as a cyclonic storm along the coast devastated standing crops, throwing lives of ordinary people out of gear. Floodwaters in Chennai entered homes and the city was literally floating for many days. In some areas, people had to hire boats to get out of their homes.

The city saw similar scenes in 2015 when floodwaters entered many homes. Even the rich and the famous of the city were rescued by disaster management volunteers. Contrast this with Chennai in 2019 when the city faced an unprecedented shortage of drinking water. It appeared almost as if Chennai was soon going to meet with its own version of ‘Day Zero’ where it would be left with not a single drop of water to drink!

What are the reasons for the state and especially its capital swinging wildly between floods and water shortage? While nobody denies the fact that weather patterns have become erratic all over the world due to climate change, people do add in the same breath that the flooding or drought in Chennai is largely man-made.

While Tamil Nadu has shot ahead of other states in terms of social infrastructure and has been enjoying good social indicators, some of them comparable to Western democracies, it is certainly lacking in urban infrastructure. Compared to many other Metros such as Delhi, Mumbai or even Pune, the city lacks urban facilities.

The city certainly needs an upgrade to its drainage system. Half of Chennai has no stormwater drains. Since it is a historic city, it has lots of heritage monuments and buildings. The challenge for the city administration is to strike a balance between the past and the present whereby they create modern infrastructure while preserving the old. The city has not grown vertically compared to many other metros while the urban transport needs improvement.

There are suggestions that the FSI area along the Metro route should be increased so that the city grows vertically. Its civic facilities need a drastic change. For instance, some parts of the city still do not get piped drinking water. Even in those parts where the water is available on tap, people still prefer to buy water in plastic cans as they do not seem to trust the municipal supply.

The city is yet to have its domestic gas supplied though pipes. The zoning laws of the city certainly need an upgrade. In many parts, local businesses and residential dwellings sit side by side. The city traffic is slow and since the roads are narrow it has many one way routes. All this, despite the fact that the city population growth is steady compared to other metros.

There could be many reasons why urban infrastructure has not improved. One could be corruption. The politician-official nexus in the state should be probed to determine what happens to the plans that are drawn on paper but hardly get implemented. The officialdom lacks imagination and requires a political push. Urban observers say there is a lack of co-ordination among various city administrative units. The city urban bodies or corporations have suffered for several years as they had no elected representatives running them.

There is a certain political apathy as far as urban issues are concerned. Both the Dravidian parties have hardly focused on the issue, though one must agree that DMK has been better compared to the AIADMK. In 2001 when Jayalalithaa got elected as the chief minister she ordered a probe on various flyovers being constructed by the previous DMK administration, stalling work at a number of places.

When DMK returned to power, it ensured that some of these projects were completed. Between 2011 and 2021 when the AIADMK was in power apparently not many urban infrastructure projects were initiated. The backlog has increased the pressure on the city. Chief Minister MK Stalin has promised the people that the city would be better prepared for the rains next year, but that is a tall order as he has to start first with capacity-building efforts.

Observers believe that it may take decades for the city to fix its infrastructure, as the problem is deep and widespread. This is because many traditional marshlands, water bodies and lakes have been encroached upon by the building mafia. The local bodies have sanctioned many buildings and institutions in low-lying areas that were once natural water bodies.

The city greenery has not improved and rampant expansion within the city has blocked pathways for natural water to get into the ground when it pours. The city simply has no capacity to retain water when it rains. Most of the rainwater gets drained out into the sea. As a result, the natural aquifers are drying up and it causes huge distress during low monsoon years. For instance, during drinking water shortages several farmers had switched to selling water. They installed deep bore wells in their fields and the water so pumped out was being ferried to the city dwellers with the help of tankers. This resulted in the water table further going down.

Tamil Nadu receives North-East monsoon that hits its coast during November-December when most parts of India experience winter. This is because the state gets very little rain during the main June to August North-West monsoon, the mainstay of the Indian monsoon system. It receives rains during the returning monsoon in the latter half of the year.

Chennai has to plan for its water management and flood control. Unless the political class takes up the issue in right earnest, the city will continue to be in distress witnessing a cycle of low rains to heavy downpour.