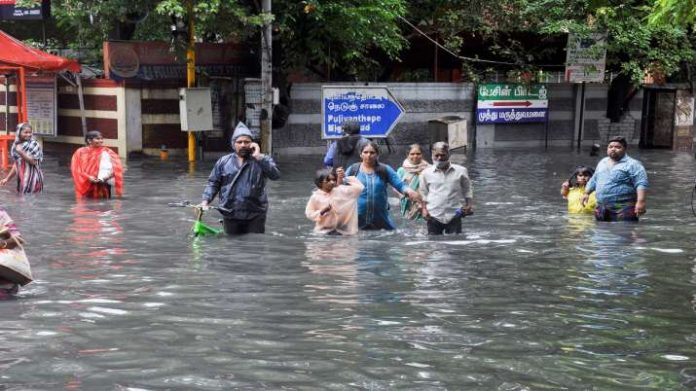 As the intensity of the downpour increased and extremely heavy rain left Chennai deluged, many pockets of the city had traffic snarls and the day-to-day life of the public was completely disrupted. (Representational image)

On Thursday, December 30, 2021, Chennai and its suburbs had a pre-New Year ‘surprise’. A bright sunny morning suddenly gave way to dark clouds and heavy rains in the afternoon. As time passed, the intensity of the downpour increased and extremely heavy rain left the city deluged. Many pockets of the Tamil Nadu capital were inundated; there were traffic snarls and the day-to-day life of the public was completely disrupted.

But the meteorological department, in charge of alerting the government in advance to take precautionary measures, had failed to forecast the extreme rainfall. Further, it did not estimate the intensity of the rainfall until 4 pm that day.

Also read: The buried and forgotten toil of Keeladi excavators

In its 3:40 pm bulletin, it issued a nowcast warning that thunderstorms with light to moderate rain would occur at isolated places over a few districts including Chennai, Tiruvallur, Kancheepuram and Chengalpet for the next two hours.

It was only hours after extremely heavy rainfall had started lashing the city that the RMC issued an orange alert. That was at 4:15 pm. In 24 hours, about 201.2 mm and 148.9 mm of rain were recorded in Nungambakkam and Meenambakkam, respectively. While the city has received 74% excess rainfall this year, the State has received 59% excess rainfall, according to officials.

“The sudden rainfall was because of the interaction between the upper air westerly trough and lower-level trough which caused convergence,” said N Puviarasan, Director of Area Cyclone Warning Centre, Indian Meteorological Department (IMD). “The convergence caused the formation of clouds and it, along with the trough, brought a steady spell of heavy rainfall in the city.”

“Based on the available information, we initially thought the upper air circulation was over the sea and it would rain in the sea on December 30. That’s why we did not take it seriously and concentrated more on the next two days (December 31 and January 1) — which held the possibility of heavy rainfall in Villupuram, Cuddalore, Puducherry and Chengalpattu. Even on those days, we had not predicted extremely heavy rains. Also, the monsoon is nearing its end and the clouds and the convergence were not too high,” said Puviarasan.

Explaining it as the one of the rarest of rare events which both the ground and satellite-based observation equipment had not picked up, he said only limited data on upper-air and no data over the sea were available.

The predictions are made based on data collected through radars installed in Chennai, Karaikal and Machilipatnam in Andhra Pradesh, which are at least 300 km apart, said the IMD official, in a hint that it is difficult to collect sufficient data required to make accurate predictions at present.

Radars set up in Chennai and Machilipatnam are at least 20 to 25 years old — they were the first set of radars installed in the country — while the other radars are at least a decade old. The department is also calibrating a new radar at OMR in Chennai.

Explaining that the IMD has been using multiple models including the Global Forecast System (GFS) model, the numerical weather prediction system developed by the National Centre for Medium Range Weather Forecasting (NCMRWF) and regional models, Puviarasan said none of the models had picked up the event.

“Upper air observations — information like wind speed and direction — are made by sending radiosonde (a telemetry instrument) along with a weather balloon up to a height of 25-30 km from Chennai and Karaikal once in two days. But only a few days back, the department received the required equipment. While they had started the exercise a couple of days before in Chennai, it is yet to be started in Karaikal,” said a source at the department.

Not just the IMD, but the weather bloggers also could not predict the event, and they too termed it a very rare event.

Weather blogger K Srikanth said: “The heavy rainfall is because of the interaction between the upper-level westerly wind and lower-level easterly wind. It is one of the freak events and none of the models had picked up the event.”

The output of the models is completely based on the inputs that are fed in, said a weatherman on condition of anonymity. Depending on the quality of the input, the accuracy of the output would vary, he explained.

Independent weather bloggers make predictions based on IMD data and the incident reflects nothing but the quality of IMD data, he said. “Only because we fed insufficient data, the models could not pick up the event,” he added.

Pointing out that the existing radars are not working properly and the new radars are yet to be installed, the weatherman emphasised that the government needs to pay attention and improve the quality of observation equipment to improve the accuracy of the predictions.

Explaining that both the IMD and weathermen are using global models to make predictions, Srikanth said the meteorological department should start using more high-resoltuion models as well as localised weather models, as there is a lot of difference between the events that occur even in the Western and Eastern Ghats. “Only if we improve the accuracy of the forecasts, we can alert the government in advance to take precautionary measures,” he added.

SR Ramanan, a retired official from IMD, had a different take. Weather forecasts are completely based on probability and are never 100% accurate, he pointed out. “The output of each model varies even though we feed the same input. So, we should never be completely dependent on the models and, instead, we should rely on our past experiences, weather situation and its analysis,” he said.

Explaining that the extremely heavy rainfall was due to the velocity convergence and that he picked it up from IMD data, Ramanan said that there was nothing wrong with the data.

Pradeep John, who blogs and tweets as Tamil Nadu Weatherman, said the event was unique. “Usually, there will not be too many thunderstorms during the rains in this season. But this time, the thunderstorms were constantly there from the start till the end of the rainfall,” he said.

While the Numerical Weather Prediction (NWP) model had managed to indicate that there would be rainfall on January 31, it had not even hinted about the rains the day before, he added.

Meanwhile, Tamil Nadu Chief Minister MK Stalin has written to the Union government, urging it to upgrade the IMD centre in Chennai.

“The shortcomings in the capability of IMD to provide accurate real time rainfall forecasting on instances like this is often preventing the State and district administration from taking up timely mobilisation of emergency management systems,” he wrote in his letter. “This results in total disruption of normal life and movement of healthcare support systems, and causes loss of life and damage to infrastructure.”

“It highlights the need for making additional investment in advanced weather prediction mechanisms and upgradation of technology being used in IMDs,” the letter said. Stalin requested the Union government to enhance the capability of the IMD in Chennai to make predictions of high alert situations in advance.