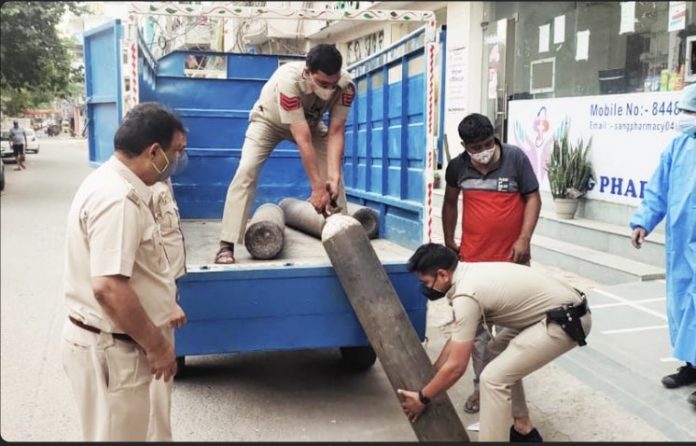 Being a hazardous substance, liquid oxygen must be transported in a limited number of specialised tankers and this requires a lot of advance planning

The Centre and states should share the liability for the death of the citizens in the country. It is due to their non-governance or misgovernance that we are in this situation today. The mismanagement of the pandemic by the government is nothing short of a disaster. In spite of warning bells, the government was blind to the visible inadequacies of our health infrastructure.

It is tragic and speaks volumes of the kind of government we have for the Delhi High Court to step in and remind both national and state governments of its powers under the Disaster Management Act to augment oxygen supplies. Every empty oxygen cylinder symbolises the empty talk of our political leaders in election rallies.

The Delhi High Court (HC) on April 25 even went to the extent of declaring that they will “hang” any person who obstructed the passage of oxygen supplies to hospitals. A bench of Justices Vipin Sanghi and Rekha Palli said, “You [be] rest assured that we will hang that man. We will not spare anyone.” The bench was hearing a petition moved by a group of Delhi-based private hospitals on the escalating oxygen crisis in various hospitals in the capital. It was a three-hour long hearing.

Calling the pandemic not a wave, but a tsunami, the court also referred to a report by a team of IIT Kanpur scientists who had anticipated that COVID would peak in mid-May. The Delhi HC then asked the question which the media is not asking:“How are you going to tackle the augmentation of medical infrastructure like beds, oxygen, ventilators, medical staff and medicines to manage the crisis?”

Solicitor General Tushar Mehta only told the court that government of India is importing oxygen. He also said, “I know my responsibility. I know many things but not saying anything. Let’s try and not be a cry baby,” in response to Delhi government lawyer Rahul Mehra’s complaint that the Centre was not complying with the guidelines for oxygen allocation.

When Delhi needed and demanded 700 MTs, the Centre reportedly allocated 378MTs. In court, Delhi government said that not even the allocated quota was delivered. Eight PSA (Pressure Swing Absorption) oxygen plants were planned for Delhi, but only one has been set up as per what the Union Health Ministry said before the Delhi High Court.

The Joint Secretary (Health) said that only one plant, at Burari Hospital, has been installed so far. He was unsure if it was even operational. Three plants were held up due to paperwork, while four were expected to be installed by April 30, he said. The BJP blamed the Delhi government for this situation.

The fact that six private hospitals were constrained to file writ petitions in Delhi HC seeking oxygen supplies, which could have been solved by a phone call or written request proves the total absence of governance in the national capital. Maharaja Agrasen Hospital, Jaipur Golden Hospital, Batra Hospital and Saroj Super Speciality Hospital had to go before the High Court over the issue of oxygen shortage for treating seriously-ill COVID-19 patients.

“You (Centre) had assured us (on April 21) that 480 MT per day will reach Delhi. Tell us when will it come? We want a definitive date. The 480 MT per day is still to see the light of the day,” the bench stated, adding that citizens of Delhi cannot be left to die like this.

The court was told that this delay is due to the distance between Delhi and the production centres. The distribution network is both stressed and stretched. Delhi should get oxygen from seven states, which are 1,000 km (625 miles) away, said the Centre. However, it was really a case of bad planning. Being a hazardous substance, liquid oxygen must be transported in a limited number of specialised tankers and this requires a lot of advance planning. Ideally, it should have been planned two or three weeks in advance.

Despite suffering for one year from the COVID pandemic, the government departments have not learnt to be alert. They cannot now blame that the crisis was sprung on them since we have been suffering from January 2020. In March 2020, the nation recognised the danger. Yet, the Central government has taken eight months to invite bids for setting up new oxygen generation plants. Tenders were floated only in October.

It is not as if the government lacks funds. An amount of ₹201 crore was already allocated from PM CARES fund, which had more than ₹3 thousand crores. In spite of giving contracts, 162 oxygen plants were not established. The Central Medical Services Society is yet to give a statement on the status. The fact that this society was not answering questions proved that they had nothing to share.

This is height of inefficiency and complacency on the part of the government. The Scroll.in claimed that when it called 60 hospitals across 14 states the responses showed that only 11 units were installed and only five are working. After publication of this story, the Health Ministry published several tweets, which said, “Out of 162 PSA oxygen plants, 33 have been installed….By end of April, 2021, 59 will be installed. By end of May 2021, 80 will be installed.” This means that less than half the number of new sanctioned plants will be installed by May end.

While the armed forces are importing 23 mobile oxygen generation plants from Germany, several other industries are offering oxygen to hospitals, while salt-to-software conglomerate Tata Group is importing 24 specialised containers to transport liquid oxygen.  The government has issued orders to convert argon and nitrogen tankers into oxygen ones. Considering the dire situation across the world due to the virulent coronavirus, India, not just Delhi, may need more oxygen in the coming weeks. Unfortunately, the lack of good governance has brought us to this situation.