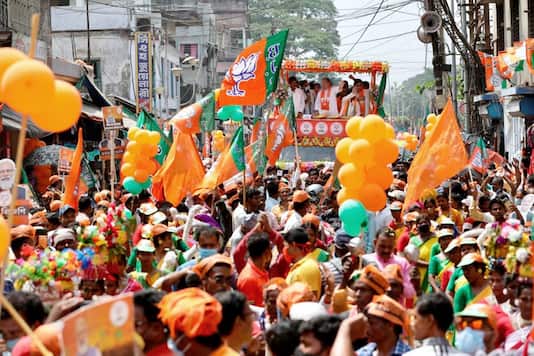 The defining image of Prime Minister Narendra Modi’s corona legacy has been drawn by an Australian cartoonist. In a devastating caricature, David Rowe has immortalised Modi as a Badshah-like figure astride a dead elephant, a metaphor for India in April 2021. Rowe has depicted Modi as a colourful, arrogant dandy holding his favourite accessory – a mike.

The Modi dispensation’s characteristic criticism of the cartoon, its very own Charlie Hebdo moment minus the shooting, has ensured worldwide audience for the send-up. The cartoon and the blowback from the government have guaranteed that whoever sees this caricature will find it difficult to forget in a hurry the image of a man who brought India to its knees, and had nothing to offer during a pandemic except, as Boyzone sang, words.

The lampooning of Modi as a hapless figure who presided over India’s descent into pandemonium during a pandemic is both ironic and tragic. Tragic because the pandemic and the callous response have recast Modi’s image from a man of action to a mix of Hamlet and Nero. And ironic because it has unmasked some of his layers, revealed the real Modi, during a period when everyone is masking up, trying to hide behind layers of protection.

The Legend of Modi

The very edifice of Modi, the leader, was built on the foundation of his ability to not just act, but to act fast. Modi burst on the national conscience first with what was seen as a lightning-quick response to the Bhuj earthquake. Once established in pop culture, this man of action persona was amped up by the spiel around how his office worked to cut red tape, made the impossible mumkin (possible) by facilitating big-ticket projects faster than you could calculate E=M x C (square), and how Modi worked 24×7.

Every calamity was an opportunity for his PR team to throw Modi’s operandi in the limelight. When an earthquake hit Uttarakhand, his spinmeisters informed India how he had burnt the midnight oil to airlift hundreds of Gujaratis from the disaster zone when the rest of India was twiddling its thumbs.

India as a country is susceptible to exaggerations and appellations. Its gullible, faith-driven people often take metaphors as reality. In their belief-system, Indira can easily be a substitute for India. For them a 56-inch chest isn’t just a parable of machismo, bravado and derring-do, it is a real statistic that defines the size of their leader’s impossible chest.

In this culture of hyperboles, Modi’s image of a “go-getter” got sexed-up in the imagination of the public, especially when contrasted with the slow, feeble and inaudible Manmohan Singh. In no time, Modi became a messianic figure who could achieve anything, conjure miracles and change the destiny of a nation with his mere presence. Ergo, slogans like “Har-har Modi” and “Modi hai to mumkin hai.”

But the real Modi was a lesser mortal than a deified leader replaced by Mahadev in slogans by his devotees.

The initial driver of Modi’s appeal was his handling of the Gujarat riots. Though branded inept and inequitious, in a milieu dominated by Islamist terror, it earned him the reputation of a man of action. Critics cribbed that this action was actually partisan and catalytic – it merely helped lumpen Hindu elements unleash a pogrom against the state’s minorities with impunity. But Modi was etched as Hindu hriday samrat on the majority’s conscience.

Bear in mind the piece de resistance of Modi’s Gujarat oeuvre was a flawed principle: in a clash of one group against another, favour the majority. To rephrase, Modi thrived on the disruption, the consequent divisions, and favoured the side that guaranteed his electoral victory. The template became his gold standard.

Recall the November of 2016. The same dynamic of disruption and division was in action during Modi’s other contribution, something future economists and historians would excoriate, to Indian destiny – demonetisation. Yet again, it was a disruptive decision that set, at least in the minds of Indians, the “haves” against the “have-nots”, the ones with kala dhan against those flush with schadenfreude in the belief that the rich were throwing their money into waste bins.

This combination of disruption and division was yet another godsend for Modi. He magnified the misery of Indians, pooh-poohed the scarcity of money in Indian homes in times of need (“ghar mai shaadi hai par paise nahi hai”, the PM joshed at a gathering) and positioned himself as the messiah of the underclass. (His cheerleaders never noticed that they would be the ultimate victims of the disruption, this purported squeeze on black money because of the hit to the GDP and the unorganised sector. But, that’s a different story).

Recall the April of 2020. At the beginning of the pandemic, the Modi government’s initial policy was of disruption through a draconian, hasty lockdown; and the targeting of Muslims through silent acquiescence to a coordinated attack on a congregation of the Tablighi Jamaat in Delhi, holding them responsible for the pandemic.

Modi’s success has largely been a result of disruptions he has been able to control, or obfuscate. Some of the crises he managed to public applause, like the one that followed demonetisation, were self-inflicted and, thus, could be self-corrected. His response to some other challenges, like the Pulwama attack, were based on secrecy, confusion and shrill chest-thumping that drowned critical analysis.

A pandemic is a different challenge. One, it has not endowed him with the luxury of picking a side. For, the disruption caused by the virus has affected everyone – Hindus, Muslims; rich, poor; privileged and the deprived in equal measure. In the fight with the virus, no Indian is on the winning side and Modi has nobody to pamper, patronise or polarise.

Two, it has busted the myth of Modi’s infallibility. The lack of oxygen, medicines and hospital beds, India’s helplessness and the government’s near-complete surrender have repainted Modi in the image of a hapless, myopic, insouciant and over-confident leader who failed to act. The image of a lion from Gujarat has been replaced by a rabbit caught in the pandemic headlights. As they say, Modi has been hoist on his own petard.

To be fair, all these failures aren’t Modi’s alone. The states are also complicit. But, Modi had taken upon himself the responsibility of leading India’s fightback. The Centre had monopolised purchases, negotiations with vaccine makers, and export-import of drugs, supplies and equipment. Across platforms, Modi had taken the credit for India’s success in dealing with the first wave and showcased the country as a global leader in dealing with the pandemic, and providing meds and jabs to the world. He had projected himself as the face of the fightback. As a result, he is getting all the blame.

The tragic part of this revisionist history of Modi is that it was meant to end in a chapter glorifying the PM. Modi, after all, had everything going for him till a few months ago. The virus had largely spared India in the first wave and gone into mysterious remission. Modi had access to vaccines (that he didn’t buy in advance). He had time to stockpile medicines, oxygen and increase hospital beds. He had political majority, public goodwill, and a pliant system behind his back.

Modi only needed to be honest to his own legend of a doer, man of action. He only needed to cut the red-tape, fast-track big-ticket constructions, facilitate mass vaccination drives, use his fabled friendship with world leaders, and lead India out of the pandemic. His failure tells us his legend was a myth and, thus, needs revision.