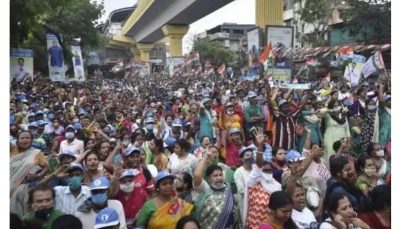 The sanctity of elections is believed to be contaminated by a lack of freedom to exercise a choice between rivals in the fray and the absence of a fair or level playing field. If there is fear, then the process of freely making a choice is believed to be violated because the forces that instil the fear are considered to have sullied the process.

The consequences of the Election Commission’s (EC) decision to follow a one-point agenda – a violence-free poll, devoid of rigging – have converted the process into an unarguably COVID-19 super-spreader series. Besides, disease and death have been added to the price that voters and contestants have been forced to pay to fulfil the declared objective of free and fair elections.

To ensure freedom and remove all fear the EC announced an eight-phase polling schedule for West Bengal (WB), so that it could deploy an unprecedented large number of Central security forces, approximately 1.5 lakh, along with a massive staff to support jawans and officers in the field, over 54 police observers, over 200 general observers and an army of audit personnel and their support staff.

In an extraordinary ruling, the Chief Justice of the Madras High Court, Sanjib Banerjee had observed on Monday, April 26, “Public health is of paramount importance and it is distressing that constitutional authorities have to be reminded in such regard. It is only when a citizen survives that he’ll be able to enjoy the rights that a democratic republic guarantees”. Holding the EC to account, the Chief Justice added, “Your institution is singularly responsible for the second wave of COVID-19″. The Chief Justice went to the extent of even orally saying, “Your officers should be booked on murder charges probably”.

Ten days earlier, Chief Justice TBN Radhakrishnan of the Calcutta High Court too observed that the EC has full power to implement COVID norms but failed to do so. He said such inaction by the EC cannot be permitted and that action beyond issuing circulars needs to be taken by it. The bench hearing the Public Interest Litigation in Kolkata said that if the EC failed then it would exercise its power to do what legendary Chief Election Commissioner, T N Seshan had done, which was rein in political parties and ensure compliance with the Model Code of Conduct that kicks in immediately after elections are notified.

The Tamil Nadu election was a one-day event; the WB elections have dragged on for over five weeks and will not be over till after May 2. Health experts had warned shortly after WB’s election schedule was announced that it would be dangerous for public health, when the pandemic was showing signs of a fresh surge to allow unmonitored public rallies, meetings and road shows as part of the democratic process.

All political parties in WB, barring the Bharatiya Janata Party (BJP), had objected to the eight-phase election. As the COVID-19 pandemic spread like wildfire across the state, WB’s chief minister and leader of the Trinamool Congress (TMC), Mamata Banerjee demanded that the EC should reconsider the schedule for the election’s final four phases.

At an all-party meeting, the collective view was, excluding the BJP that the remaining phases should be clubbed together to rein in the spread of the coronavirus. By April 16, the number of cases in WB had jumped and the positivity rate had crossed 17 per cent of all persons tested.

After two candidates died and almost a dozen was infected by the killer virus, the EC stirred into action after a scathing indictment by the Calcutta High Court. It banned public rallies and road shows, though it allowed public meetings of 500 persons if all protocols to maintain safety, including masking and social distancing were implemented. The death toll of candidates has increased to three and more candidates are reporting that they have been infected by the disease.

The EC’s minimalist response to the judiciary’s condemnation, of its failure to implement  public safety protocols such as banning rallies and road shows during a public health crisis, reflects a particularly unfortunate and extremely narrow perspective on what constitutes freedom and safety. The obvious connection of fear with freedom, including fear of disease and perhaps even death or enduring damage to health was clearly not the EC’s concern when it designed the eight-phase polling schedule for WB. Its attention was so firmly fixed on the state’s reputation for violence and its notoriety in skillfully rigging elections that the institution ignored the context within which the elections were being held in 2021.

The EC’s singular agenda to avoid violence and rigging in the WB elections was an obvious response to the narrative of corruption crafted by the political opposition against the incumbent TMC. The EC may have succumbed, intentionally or unintentionally, to the pressure exerted by the principal political challenger, namely the BJP’s insistence that the TMC could not win without corrupting the election process through violence and voter intimidation.

The EC’s task is to remain neutral regardless of the pressures that political parties, including ruling parties exert. As an institution created by the Constitution, the EC has a responsibility that goes beyond implementing the Representation of Peoples’ Act. It is an institution that has been created to uphold the principles of democracy and enable every eligible citizen to exercise her sovereign will, from time to time, in selecting a representative to fulfil her expectations, fight for her rights and further her interests.

Also read: If COVID protocols aren’t in place, will not allow counting: Madras HC to EC

When the EC disregarded the context within which the elections are being held in 2021 in four states and one Union Territory, as is evident from the rulings of the Calcutta and Madras High Courts, and how it has failed to realise its actions were contributing to a worsening of the already grave public health crisis, then it opens up the institution to questions about its intentions and its neutrality.

By dismissing the appeals of all political parties, except the BJP, that the eight phases would seriously endanger the public, the EC said it was not within its powers to alter the schedule after it was notified.

The seeming inflexibility of the election process after the appropriate notifications have been issued, according to the EC headed by the just retired Sunil Arora and with the concurrence of the current Chief Election Commissioner Sushil Chandra, is a sham. On two momentous occasions, once in 1984 and then in 1991, the EC set new precedents in response to the extraordinary prevailing circumstances. Those were not global health crises caused by a deadly pandemic but they were political crises.

In 1984, immediately after the assassination of Prime Minister Indira Gandhi, general elections were held across the country, except in two states – Punjab and Assam. Parliamentary elections in these two states were held months later in 1985, because the turmoil in those states did not guarantee a free, fair and peaceful election.

In 1991, the general election was underway when Rajiv Gandhi was assassinated. The elections were suspended and then resumed with a different schedule. It could be argued that in 1984, the EC scheduled the polling to be split, while in 1991, the abrupt change in schedule was in response to a crisis.

In 2021, when political parties pleaded for a clubbing of polling dates so that campaigning could be curtailed, people could stay home or protect themselves by drastically reducing their contact with others, the EC insisted that such a change was not possible because the law did not allow it. By citing the inflexibility of the law and the rules, this EC ignored precedents set by other crises and the response of past CECs.

The price of this short-sighted decision is the out-of-control surge in the infection rate, the near total collapse of the health infrastructure and the resultant impact on people’s lives in poll-bound WB and the three other states and one Union Territory, where elections are over barring the counting on May 2. Through its narrow interpretation of safety and uncontaminated polling, the EC, in the eyes of the Madras High Court has successfully contaminated the country.