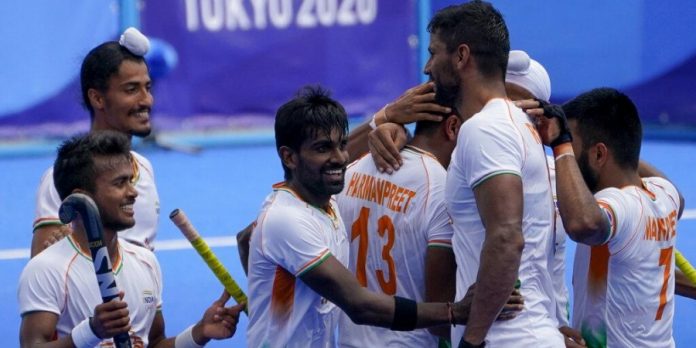 In the third quarter, Indian forwards moved ahead as Varun Kumar gave the team a much-needed breakthrough

From Tokyo came gushing wows for India’s men’s hockey team on Thursday (July 29), as they defeated defending champions Argentina 3-1, marking back-to-back victories after the conquest of Spain with the same score. The Indian team has now qualified for the quarterfinals in the Tokyo 2020 Olympics.

Varun Kumar scored first for India in their fourth Group-A game at Oi Hockey Stadium-North Pitch. But the Indian gain was soon neutralised by Argentina’s Casella.

India then scored two late goals – one by Vivek Sagar Prasad and another by Harmanpreet Singh – to ensure that they book their place in the quarterfinals.

Also read: Food can weight, not medal: Why Chanu didn’t eat anything for two days

India started the match at a good pace as defenders gave no clear-cut chance to the defending champions to find that rhythm in midfield. Dilpreet Singh had India’s best chance in quarter one, but it was kept out by the Argentine goalkeeper with a very good save.

India’s finishing was not clinical even in the second quarter and it remained scoreless after the end of the first half.

In the third quarter, the pressure by Indian forwards finally worked as Varun Kumar gave the team a much-needed breakthrough after converting a very well worked penalty corner.

In the dying minutes of the game, Graham Reid’s men were close to doubling their lead, but Argentina’s goalkeeper Juan Manuel came big for his team again by saving a nicely worked penalty corner by the Indians.

In the fourth quarter, Argentina responded by converting a penalty corner and levelled the match as Casella stormed the ball past goalkeeper Sreejesh.

With the match going for a draw, Vivek Sagar Prasad came with an absolute poacher of a finish to regain the lead for the team. Minutes later, Harmanpreet Singh converted a well-earned penalty corner and sealed the match for India.

India have now won three matches in their group. The team have consolidated their position in the second spot of Pool A with three wins and one loss, behind Australia.

The top-four make the last-eight stage from each group. India will play hosts Japan in their final pool match on Friday (July 30).