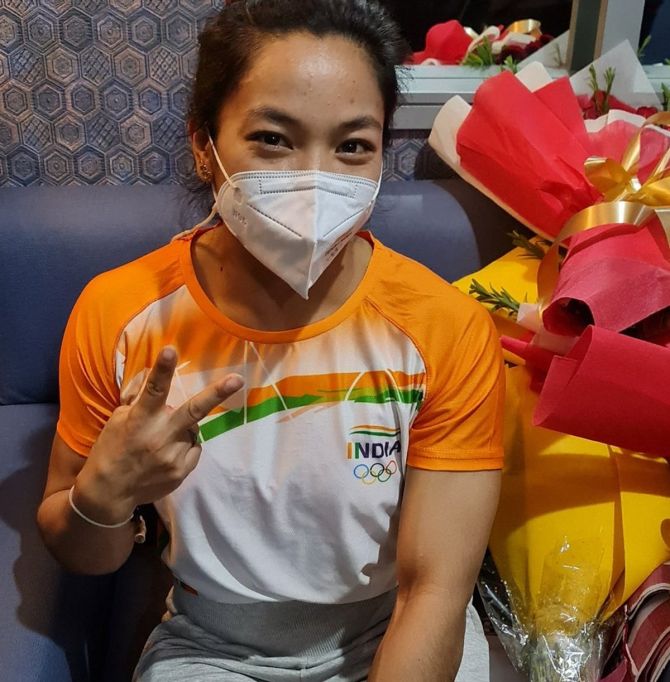 Indian weightlifter Mirabai Chanu returned to a rousing reception in the country on Monday evening after having won silver at the Tokyo Olympics.

Clad in a face shield and mask, Chanu walked out of the Indira Gandhi International Airport, flanked by security personnel. The 26-year-old, greeted with chants of Bharat Mata ki Jai, was later felicitated by officials of the Sports Authority of India among others.

“Happy to be back here amidst so much love and support. Thank You so much,” Chanu tweeted after landing.

Also read: Of grit & chutzpah: How Mirabai Chanu pulled it off at Tokyo Games

Later speaking to NDTV, Chanu said she didn’t eat anything for two days leading up to her competition mostly because of concerns over her weight.

“It’s very difficult (to maintain weight). We need to strictly control our diet to maintain weight for this category. I should not eat junk food and my diet is just limited to peas, meat etc,” Chanu said.

After a distressing debut at the Rio games in 2016, Chanu had worked hard with a single-minded focus on her sport for this Olympic medal, never taking a single “cheat day’ from her training and making a lot of sacrifices. A foodie, Chanu even gave up her favourite food – pizza.

“The first thing I will do is to have a pizza. I love pizzas and I haven’t had one in a long time. So first I’ll have a pizza,” she said soon after her victory.