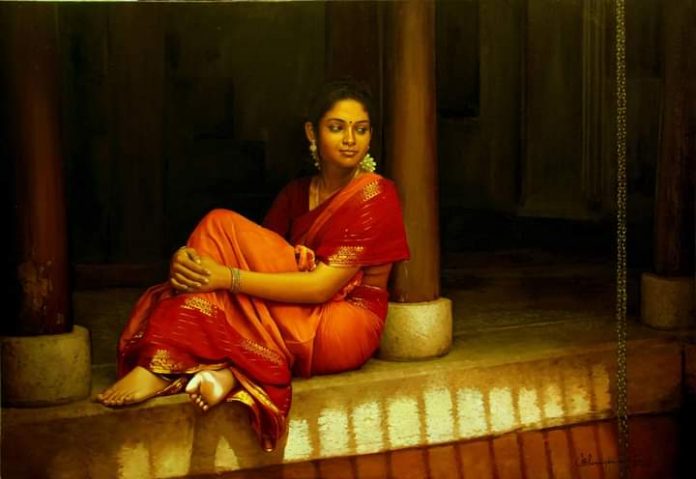 At first glance, many wondered whether S Elayaraja's artwork was a photograph, because he had such a masterful control over oil paints that even the sun rays looked powerful in his paintings

Noted painter S Elayaraja, who was known for reintroducing realism in portrait painting in Tamil Nadu, passed away on June 7 due to COVID. He was just 42 years old.

Elayaraja Swaminathan, who hailed from Sembiyavarambal village, near Kumbakonam in Thanjavur district, started learning painting on his own, inspired by his natural surroundings at a very young age.

In an interview to this reporter back in 2011, Elayaraja had said that being a son of a carpenter, he had a lot of opportunity to watch cart wheels being crafted. “I trained myself to draw the wheels by the ‘free hand’ method. Then I started to learn to draw people like the news readers Nijanthan and Sundarrajan who were then popular on Doordarshan. Then I moved on to draw deities and actors,” he had said.

Though he showed no interest in studies, he shone in other activities such as football and shooting competitions. While his family had expected him to become a military officer, his art teachers Durai and Amudha advised him to pursue Fine Arts.

However, his family discouraged him. But he fought with them, and ran away to stay in his art master’s house. His teachers helped him to join the Kumbakonam Government Fine Arts College, where well-known artist Manohar was a teacher. Under his training, Elayaraja became well-versed in painting human anatomy. He then continued his master’s in Chennai Government Fine Arts College.

Elayaraja was confused about his style of art when he had passed out of college. In his words: “At that time many were following modern art, some followed abstract, etc. I decided to do realistic portraits.” Most of his subjects were women. Being the youngest of a family of ten, he had five sisters who had taken care of him in his childhood. Later, his brother’s wives took care of him.

Hence, his world was “surrounded by women”. One of the recurring themes in his paintings was “waiting”. That was mainly because he used to see his sister-in-laws always waiting for his brothers to return from the Gulf where they had been working.

Before Elayaraja’s arrival into the art scene, the paintings, particularly magazine paintings were dominated by abstracts and graphics. When Elayaraja entered the world of professional art in early 2009, the Tamil art houses took interest in his work. With thick coatings of paints and realistic human forms, Elayaraja became the talk of the town.

His portraits of ‘Dravidian women’ (2009) with the elements of traditional household things such as mud pots, mud stoves and typical south Indian cultural attire such as the ‘dhavani’ (part of the traditional half saree ), bangles, etc., made the artworks more close to the soil and people’s heart. At first glance, many wondered whether his artwork was a photograph, because Elayaraja had such a masterful control over oil paints that even the sun rays looked powerful in his paintings.

His talent won him a state award, a fellowship from the Lalit Kala Akademi and opportunities to participate in many international exhibitions. It was also the time social media had not yet become so widespread. His paintings started to appear in many magazines and Elayaraja shot into the limelight.

Elayaraja, who is survived by his wife and two children, had also acted and assisted actor-director R Parthiban in the Tamil movie, Ivan (2002).

The artist was never satisfied with his achievements, however. He had always admired the lighting in Rembrandt’s paintings and the detailing of Johannes Vermeer and wanted to learn more and more. He had planned to document the experiences of women from different landscapes but his dream snapped all of a sudden. Truly, this passionate artist still had  a lot more to give to the art world.