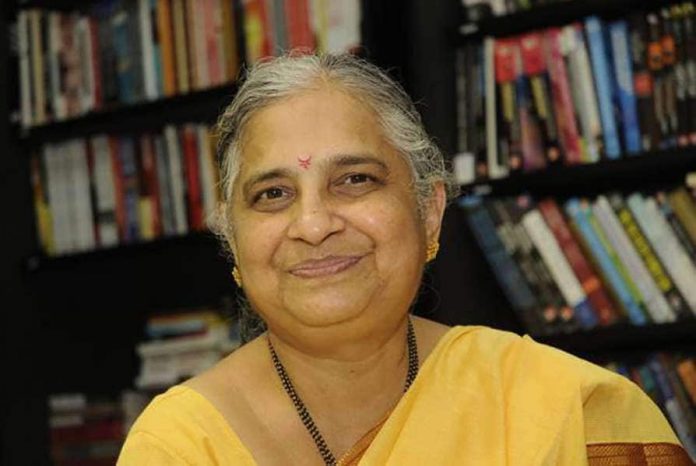 Murthy published her first book for children, How I Taught My Grandmother To Read, in 2005.

Sudha Murthy dons many hats – of social entrepreneur, teacher, and best-selling children’s author. But not many know that she turned to writing in English only after her 50th birthday.

The 71-year-old, wife of IT doyen Narayana Murthy, shared the secret of her success as an author and what pushes her to write at the Times Literature Festival, which is currently on.

“I write in a very simple way with a small vocabulary and most Indians who study in their mother tongue have that kind of English language,” she told Shobha Tharoor Srinivasan, according to a report in The Times of India.

Truly, what is a huge draw for kids is her usage of simple English in her books, which also aim to teach children valuable life lessons that they otherwise learn from their grandparents.

Murthy, an engineer, turned to non-fiction writing and then to children’s writing, becoming popular for books such as Grandma’s Bag of Stories, The Magic Drum, How the Onion Got Its Layers, among others. She has written more than 39 books, most recently How The Earth Got Its Beauty, and published her first book for children, How I Taught My Grandmother To Read, in 2005.

“It’s not that only my life has these experiences, but I note down everything, which is the secret of my success,” she said.

On how she finds time to write, Murthy, who believes age is no bar to learning, said she prefers to write early in the morning before going to work and revisits her work in the evening.

She further explained her process of writing: “It is like boiling milk on fire. When it starts boiling, it comes out of the vessel. The moment the story is ready, it pushes me to write. The scenes and conversations come in front of me, frame by frame, including details like the colour of saris.”

The emotions that she puts in her writing, said Murthy, come to her in Kannada, her mother tongue. “For the first 50 years of my life I wrote in Kannada,” she revealed, while talking about her love for reading as she grew up in a village (Karnataka’s Hubli) without electricity and radio. “So the only entertainment was reading books.”

Interestingly, she says she thinks in Kannada while writing “because the emotions come to her in Kannada”.

In her interaction, Murthy gave some tips to aspiring writers, while advising them to not be too sensitive in life. “Writing is like weaving a cloth – imagination is one thread and reality is another. When the book is finished, the reader won’t be able to distinguish what is imagination and what is reality.”

Talking last month about her latest book How The Earth Got Its Beauty, published by Penguin Random House, she had revealed how the story came to her: “During my travels, I often see different landscapes – snow-clad mountains, meadows of flowers, singing rivers, animals of various shapes and sizes and the colourful life inside waterbodies. I became curious about the artist who has made this delightful chaos. I wondered and wondered and, to my astonishment, this story came to me in a beautiful flash and I wanted to share it with my young readers.”