The official website of People for Animals (PFA), an animal rights NGO founded by BJP MP Maneka Gandhi, was hacked on Friday (June 5) by a group of “ethical hackers” over her remarks made on Malappuram district while referring to the death of a pregnant elephant in Kerala.

A message on the defaced website read, “Maneka Gandhi dragged the sad death of pregnant elephant for dirty politics,” with the popular coffin dance music playing in the background.

Gandhi has been facing the wrath of Keralites after she tweeted that Malappuram district was known for “its intense criminal activity,” especially with regard to animals.

“Malappuram is known for its intense criminal activity specially with regards to animals. No action has ever been taken against a single poacher or wildlife killer so they keep doing it. I can only suggest that you call/email and ask for action,” she tweeted.

The message, on the the web page was hacked by Kerala cyber warriors, further said the incident happened in Palakkad district and “we all know that you deliberately brought up Malappuram district to spread communally motivated false information targeting Muslim majority !!!”

“Your agenda is clear, love for animal is intertwined with hate for Muslims. Spreading false information by a person especially being an ex-minister and a Lok Sabha member is a real threat to the nation and not acceptable,” it read. 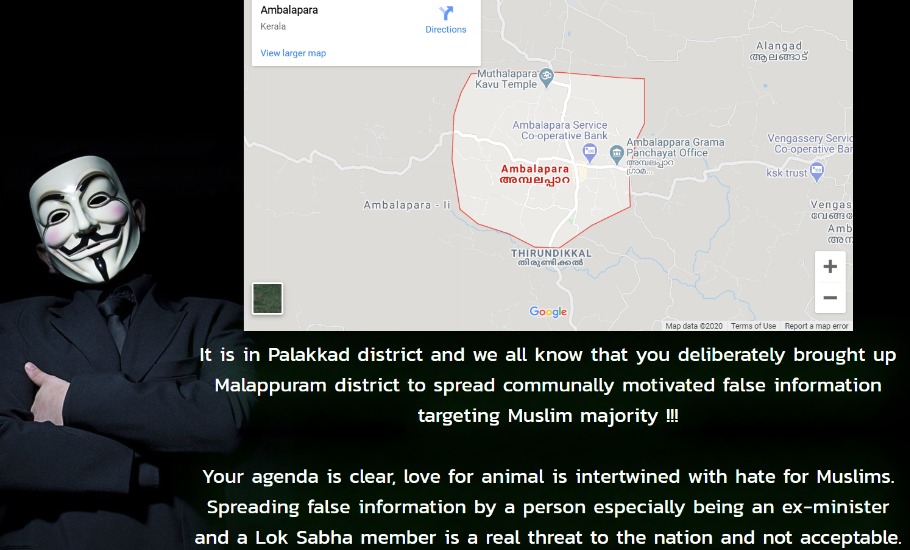 In a major breakthrough in the case relating to the death of a pregnant wild elephant in Kerala, one person was arrested on Friday.

“One person was arrested today. There are more accused in the case and efforts are on to nab them”, Kerala Forest Minister K Raju told media.

Forest and police officials are conducting a joint probe into the elephants death and a very fruitful investigation is going on, he said.

The Kerala Forest Department in a tweet said, “KFD has zeroed in on the culprits and recorded the first arrest in the wild elephant death case.”

Kerala Chief Minister Pinarayi Vijayan had on Thursday said there was an “organised campaign” at the national level against Kerala and Malappuram district while accusing the BJP leaders, including central ministers, of being involved in spreading contradicting facts and statements.

The 15-year-old elephant is suspected to have consumed a pineapple filled with powerful fire crackers, which exploded in the animals mouth in the Silent Valley Forest and it diedin Velliyar River about a week later.

Vijayan’s assurance of stern action came amid a social media storm over the brutality meted out to the elephant and the Centre expressing serious concern.

The social media has been trending with the various forms of hashtag, including I Stand with Malappuram. The message on the PFA website also read, “the bond between Hindu and Muslim in Malappuram is strong. So, stay down, keep dreaming and keep it real.”

Meanwhile, in Malappuram District, a tree was planted by Muslim Youth League state president Munavarali Shihab Thangal along with the priest of Thripuranthaka temple at the
temple premises in a response to the former Union Minister.

Thangal, an influential Muslim leader and Manikandan Embrathiri, the temple priest, planted the tree together on the World Environment Day as “a message of secularism” to
those who “spread hate” against the district. 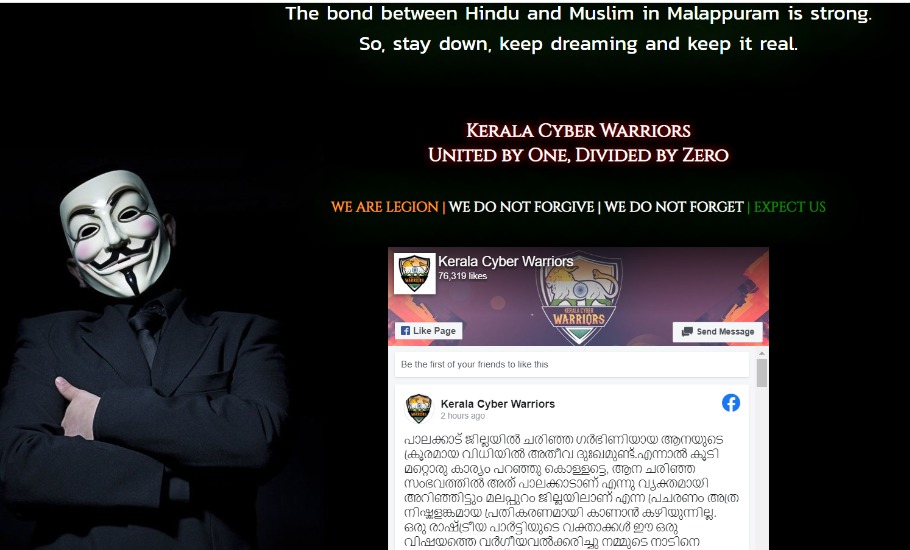 The hacked webpage features a person in a Guy Fawkes mask, which was used as a major plot element in V for Vendetta,a British graphic novel written by Alan Moore and illustrated by David Lloyd.

What Tangedco can learn from NGOs about call centre services