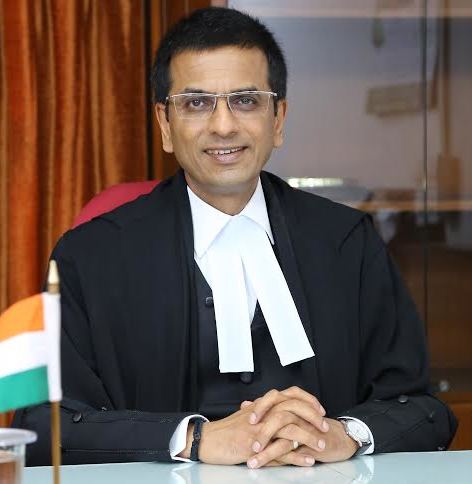 The new CJI will take oath on November 9, a day after incumbent CJI Justice Uday Umesh Lalit demits office on attaining the age of 65.

In exercise of the power conferred by the Constitution of India, Hon’ble President appoints Dr. Justice DY Chandrachud, Judge, Supreme Court as the Chief Justice of India with effect from 9th November, 22.

While Justice Lalit has a brief tenure of 74 days, Justice Chandrachud will serve as the CJI for two years. He will demit office on November 10, 2024. He is the son of the longest serving CJI, YV Chandrachud. His father was the head of the Indian judiciary from February 22, 1978 to July 11, 1985.

Justice Chandrachud, who sees dissent as the “safety valve of democracy”, was part of several Constitution benches and landmark verdicts of the top court including on matters relating to the Ayodhya land dispute and right to privacy.

Principal Secretary to the Prime Minister PK Mishra and top officials of the Department of Justice in the Law Ministry personally handed over the warrant of appointment signed by the President to Justice Chandrachud this afternoon, following which a formal notification announcing his appointment as the next CJI was issued, sources said.

CJI Lalit had on October 11 recommended to the Centre the name of Justice Chandrachud as his successor. The CJI-designate was part of the benches that delivered path-breaking judgements on decriminalising same-sex relations after it partially struck down Section 377 of the IPC, validity of the Aadhaar scheme and Sabarimala issue.

Recently, a bench headed by him expanded the scope of the Medical Termination of Pregnancy (MTP) Act and the corresponding rules to include unmarried women for abortion between 20-24 weeks of pregnancy. The Justice Chandrachud-led bench had also passed several directions to assuage the miseries faced by people during the COVID-19 crisis, terming the brutal second wave of the pandemic last year as a “national crisis”.

Recently, Justice Chandrachud was among the two judges of the apex court Collegium which had objected to the method of “circulation” adopted for eliciting the views of its members on the appointment of judges to the top court.

On September 30, 2022, a bench headed by Justice Chandrachud sat till 9:10 pm, around five hours beyond the regular working hours of the apex court, to hear 75 cases to clear the board before the onset of the Dussehra vacation.

In a landmark verdict delivered in February 2020, a bench headed by Justice Chandrachud had directed that women officers in the Army be granted permanent commission and command postings, rejecting the Centres stand of their physiological limitations as being based on “sex stereotypes” and “gender discrimination against women”.

Later, the Justice Chandrachud-led bench had also paved the way for granting permanent commission to women officers in Indian Navy, saying a level playing field ensures that women have the opportunity to overcome “histories of discrimination”. Justice Chandrachud, who has played a pivotal role in digitization of the judiciary, has been part of several Constitution benches.

On November 9, 2019, the apex court in a unanimous verdict cleared the way for the construction of a Ram Temple at the disputed site at Ayodhya, and directed the Centre to allot a 5-acre plot to the Sunni Waqf Board for building a mosque. Justice Chandrachud was part of the five-judge Constitution bench which dealt with the Ayodhya case.

He wrote the lead judgement for a nine-judge Constitution bench in the Justice KS Puttaswamy versus Union of India case, in which it was unanimously held that right to privacy constituted a fundamental right under the Constitution. He was also part of a five-judge Constitution bench that unanimously decriminalised part of the 158-year-old colonial law under Section 377 of Indian Penal Code, which criminalises consensual unnatural sex between consenting adults, saying it violated the rights to equality.

In another five-judge bench, Justice Chandrachud, in a unanimous verdict, held Section 497 of the Indian Penal Code, which criminalised adultery, to be unconstitutional on the ground of being arbitrary, archaic and violative of the right to equality and privacy.

Held Aadhaar to be unconstitutional

In a strong dissent, Justice Chandrachud differed with other members of a five-judge Constitution bench, which by a majority verdict upheld the constitutional validity of the unique biometric identity number Aadhaar.

In July this year, the Justice Chandrachud-led bench had ordered release of Alt News Co-founder Mohammad Zubair on interim bail in all the FIRs lodged in Uttar Pradesh against him for alleged hate speech, saying “exercise of the power of arrest must be pursued sparingly” and transferred all the cases in UP to Delhi.

After completing BA with Honours in Economics from St Stephens College, New Delhi, Justice Chandrachud did his LLB from Campus Law Centre, Delhi University, and obtained LLM degree and a Doctorate in Juridical Sciences (SJD) from Harvard Law School, USA.

He practised law at the Supreme Court and the Bombay High Court and was a visiting professor of comparative Constitutional law at the University of Mumbai.

What is the green comet bedazzling the night ...