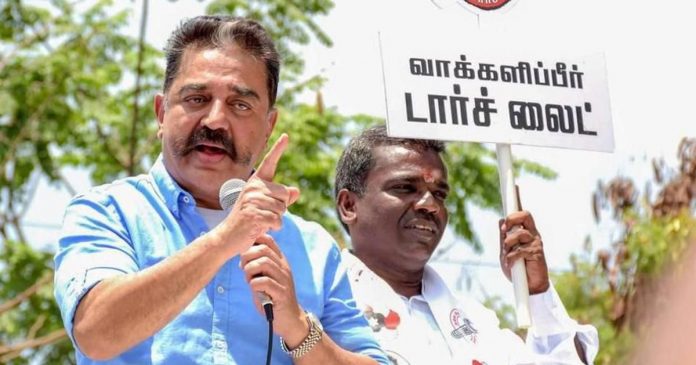 Kollywood, take a breath: Celluloid heroes are, after all, an exaggerated reality; they can fall by the wayside in the last lap of an election contest; their onscreen invincibility unable to match their off-screen vulnerability. Kamal Haasan went down fighting – his debut performance – in a photo-finish from Coimbatore South.

Haasan’s Makkal Needhi Maiam (MNM) was in the fray in 154 of the 234 seats that went to polls in the Tamil Nadu election. Its allies, the All India Samathuva Makkal Katchi and Indhiya Jananayaga Katchi fought on 40 seats each. None of them has managed to win a seat.

Haasan stood a close second while Mayura Jayakumar of Congress (INC) came third. This will be Vanathi’s first stint as an MLA.

The actor-turned-politician had surprised many by giving Chennai a miss. But he had a reason: Of 37 seats that the MNM contested in the 2019 Lok Sabha polls, it had received most votes in Coimbatore.

The MNM chief did put up a fight: he led in the initial counting. But a few rounds later Congress’ Mayura Jayakumar took the lead. BJP’s Vanathi Srinivasan, who had slid to third place, closed in as the counting went on, eventually beating her rivals.

The Coimbatore South constituency came into existence following the 2008 delimitation. The constituency elected AIADMK’s R Doraisamy as its first MLA in 2011. In 2016, AIADMK’s Amman K Arjunan was elected in the state assembly.

Also read: DMK won, but it failed to deliver a knockout blow. Why?

With around 1.75 lakh voters, in 2021, the constituency attracted a lot of attention after Kamal Haasan’s candidature. With BJP’s national women’s wing chif Vanathi Srinivasan and INC’s working chief of Tamil Nadu Mayura Jayakumar also announcing their candidatures from this constituency, it became a three-way fight. Vanathi is a practising lawyer, who joined the BJP after being trained in the Akhil Bharatiya Vidyarthi Parishad (ABVP), the student wing of the RSS.

For Vanathi Srinivasan, this was her third state assembly election. She had contested from Coimbatore South in 2016 as well and had come third after Amman K Arjunan and Mayura Jayakumar.

Coimbatore is one of the gateways for the BJP in the state. It was here that veteran BJP leader L.K. Advani’s visit in 1998 was targeted by terrorists. The BJP went on to win the next two Lok Sabha polls from Coimbatore. Coimbatore also has a history of communal polarization following the murder of Hindu Munnani leader C Sasikumar in 2016.

Kamal Haasan was the richest candidate for the state polls: he declared moveable assets worth over ₹45 crore. The actor pegged his immovable properties, including commercial buildings and agricultural land, at a little over ₹131 crore. He also declared two residential buildings in Chennai, cumulatively priced at ₹19.5 crore, and a joint property in London worth ₹2.5 crore. However, his party sources have said the MNM chief doesn’t spend much money on elections.