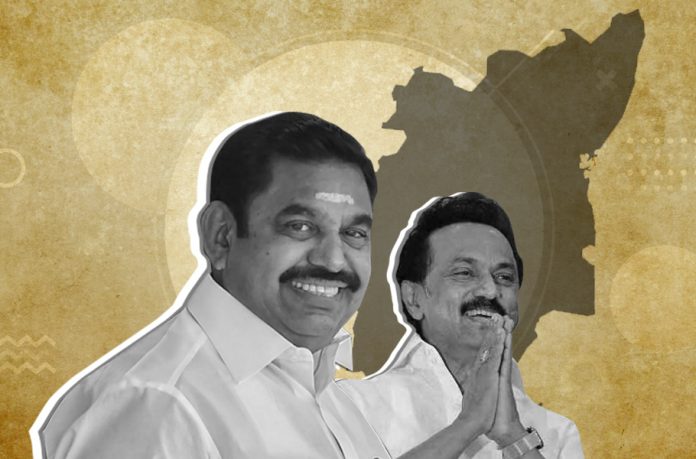 The inability of the DMK to wean away the segment of anti-AIADMK votes from the ruling party is something that Stalin needs to introspect on | Photo: PTI File

The DMK-led front has failed to seize the opportunity of a clear anti-incumbency trend against the Edappadi Palaniswami government of the AIADMK, an analysis of the trends from votes counted so far for the Tamil Nadu assembly election shows. There is more than a 10 per cent drop in AIADMK vote-share compared to the 2016 assembly polls, but the votes caused by this swing against the AIADMK have not gone to the DMK, but to other parties. This explains why the DMK has not been able to register a stunning victory but has to be satisfied with moderate success.

The DMK front has secured a vote-share of 43.65 per cent in the votes counted so far, ahead of the AIADMK-led combine’s vote share of 41.47 per cent, revealing a 2.18 per cent edge over the rival front at the moment, with 60 per cent of the votes still to be counted.

The swing against the AIADMK now appears to be over 10 per cent, given that the party secured 41.1 per cent in 2016 on its own. On the surface, it may appear that the AIADMK has repeated its 2016 performance of just over 41 per cent vote share. But the reality is that the AIADMK should have got not 41 per cent but close to 51 per cent, since it now has new allies in the BJP, the ruling party at the Centre, and PMK and Tamil Maanila Congress (TMC), and a few other minor parties, whose combined vote-share would be around 10 per cent, keeping in mind voting figures in 2016 assembly and 2019 Lok Sabha polls.

Thus, the AIADMK vote-share should have been 51 to 52 per cent, as against which it could muster only a total of 41.47 per cent, despite pumping in several hundred crore rupees in government advertisements to boost the image of Palaniswami, and cash doles at the time of Pongal, besides several freebies at the cost of the government treasury.

On the other hand, the DMK has not succeeded in reaping benefits from this anti-incumbency trend. Judging by the DMK vote-share of 2016 of 39.9 per cent, including that of the DMK and Congress mainly, the combined vote-share in 2021 is only 43.65 per cent, which is not a big increase since the votes of the CPI, CPI-M, MDMK and VCK (which contested as part of a six-party third front in 2016) if added to 39.9 means that the DMK has hardly gained from the 2016 position. Even the votes of the four allies could have been higher than the 3 per cent secured by them in 2016 since they were now contesting as part of a powerful DMK-led front. Given this situation, the nearly 10 per cent swing against the AIADMK now has not come to the DMK-led combine.

This percentage has apparently gone to the AMMK led by TTV Dinakaran, nephew of Sasikala Natarajan, who was a close aide of former chief minister and AIADMK supremo J Jayalalithaa, Kamal Haasan’s Makkal Needhi Maiam (MNM) and partly to the Naam Tamizhar Katchi (NTK) led by actor-director Seeman. The exact break-up of the vote-share of these three parties is not yet available but cumulatively they could have mopped up 10 to 12 per cent.

The inability of the DMK campaign managers to wean away the segment of anti-AIADMK votes from the ruling party’s kitty into their own vote bank is something that the DMK needs to introspect on. For the moment, it appears that a section of people who voted for the AIADMK have lost faith in that party and decided to change their preferences, but have clearly not opted for the DMK as an alternative. This is a worrying sign for the DMK, and does not augur well for the future of the party.

All these three parties, the AMMK, MNM and NTK, have the potential to grow and consolidate their position.

For the AIADMK, it is another occasion for soul-searching, but one doesn’t know if the party has the inclination for it. It suffers from phenomenal arrogance that it can do no wrong, and that come election, money and muscle power are enough. Who can blame the AIADMK leadership for thinking so when a section of the voters is quite happy to receive cash doles before casting votes. One reason why several exit polls miss the mark is the factor of money power, which the receiver is not bound to admit to a television channel. Despite the Election Commission warnings, large sums of money seem to have been doled out on the eve of the elections. If 30 seats have shown a change compared to opinion polls, the reason is not far to seek.

31 of 32 DMK ministers crorepatis, Ranipet Gandhi richest of them al...