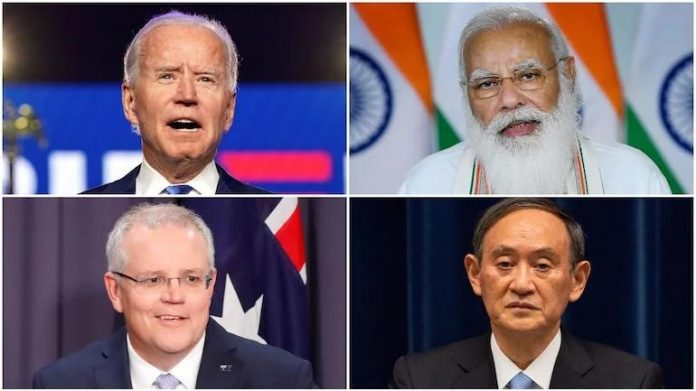 The Chinese foreign ministry hit out at the upcoming Quad summit for forming “exclusive cliques” to target other countries and denounced it as having no future.

On Monday (September 14), the White House had announced that US President Joe Biden would host the first in-person Quad summit on September 24 in Washington, which will be attended by Prime Minister Narendra Modi, Prime Minister Scott Morrison of Australia and Japanese premier Yoshihide Suga. At this summit, which Prime Minister Narendra Modi is expected to attend, the leaders will review the progress made since their first virtual Quad summit in March and “discuss regional issues of shared interest”.

This summit is being held in the backdrop of China’s aggressive behaviour in the resource-rich South China Sea.

On asked about China’s reaction to the Quad summit, Chinese foreign ministry spokesman Zhao Lijian told mediapersons that countries cooperating with each other should not target third parties. According to Zhao, regional cooperation framework should be in step with the trend of the times and be conducive to mutual trust and cooperation between the regional countries.

“It should not target any third party or harm their interests,” he pointed out.

“To form exclusive cliques targeting other countries does not conform with the country’s aspirations, won’t be popular and has no future,” he asserted.

Also read: The Quad has the ability to bark, but can it ‘bite’ China?

Further, he stressed that China is not only an engine for economic growth in Asia Pacific but is the main force safeguarding peace. And that the growth of China means that “forces for peace” will increase in the world and that is “good news” for the region.

He asked the relevant countries to shed the “obsolete Cold War mentality” and “narrow-minded geopolitical rivalry” concepts. They should instead respect people’s aspiration in the region and do more things conducive to regional solidarity and cooperation, said Zhao.

In November 2017, India, Japan, the US and Australia firmed up a long-pending proposal to establish the Quad to develop a new strategy to ensure the critical sea routes in the Indo-Pacific remain free of any influence.

In March, President Biden hosted the first-ever summit of the Quad leaders in the virtual format that vowed to strive for an Indo-Pacific region that is free, open, inclusive, anchored by democratic values, and unconstrained by coercion, sending a not too subtle message to China.

Beijing claims almost all of the 1.3 million square mile South China Sea as its sovereign territory. China has been building military bases on artificial islands in the region also claimed by Brunei, Malaysia, the Philippines, Taiwan and Vietnam, said agency reports.