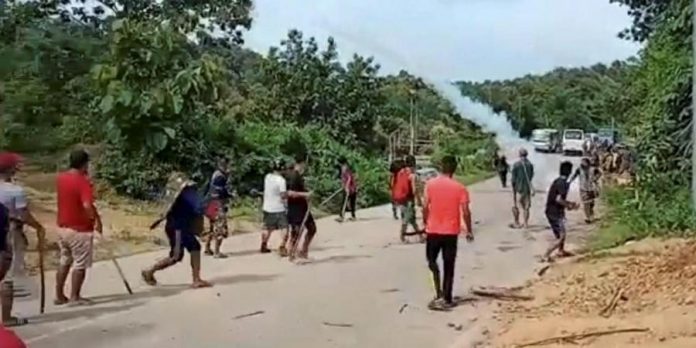 The Assam government has said two separate cases against Nagaland and Arunachal Pradesh are going on in the Supreme Court. PTI File Photo

In an escalation of border tensions, three more states which are a part of the NDA alliance
— Meghalaya, Nagaland and Arunachal Pradesh — have accused the Assam government of using “bullying tactics” and acting as a big brother in the region. In a peculiar situation, the Mizoram government has already registered an FIR against the Assam CM and four officials.

To douse the tension simmering in the disputed Dessoi Valley forest in Jorhat district of Assam and Tsurangkong valley in Mokokchung district of Nagaland since May, chief secretaries of the two sides met in Dimapur in Nagaland on July 31.

Also read: Border on the boil: Assam won’t give an inch of land, says CM

In the meeting, the two sides agreed that “urgent and effective steps” are required for “defusing the standoff” between the police forces of the two states.

“In this regard, it is decided by both sides that the security personnel of both states shall simultaneously move back from their present locations to their respective base camps,” according to a joint statement issued by the two top bureaucrats after the meeting.

The withdrawal process would be completed within the next 24 hours, the statement said.

The two states would keep vigil in the area with unmanned aerial vehicles and satellite imagery, the statement added.

Interestingly, though these border disputes are old, things took a violent turn after Union Home Minister Amit Shah’s meetings with all the CMs of the northeastern states on July 24. The meeting took up settling these border issues.

The Nagaland government had earlier hit out at the Assam government saying the latter doesn’t keep its commitment on the border issue. “The situation is tense and the area has been on the boil since May when then Congress MLA Rupjyoti Kurmi was shot at but survived. The Assam police are building bunkers there,” said Sudipta Nayan Goswami, a Jorhat-based lawyer and social activist.

“It is important to demarcate the border and solve the issue at the earliest, else people from both sides will continue to suffer,” said Goswami.

Nagaland deputy chief minister Y. Patton, who belongs to the BJP, said that at a meeting between both the Assam and Nagaland CM, both had agreed to withdraw their police forces from their outposts in the Tzurangkong border area.

He, however, alleged that Assam did not honour its commitment. He cautioned that Assam should not test the patience of the Nagaland government or its people.

Meghalaya, which has an NDA government with BJP as a stakeholder, is also at loggerheads with Assam though state’s CM Conrad Sangma tried to downplay the border crisis, saying all is under control. Sangma has acknowledged the problem and has said both states are working towards an amicable solution.

Rymbui said the area where the clash occurred was never a disputed site and that people there received developmental benefits from the Meghalaya government.

On the Meghalaya front, Sangma, while admitting there are certain sensitive areas along the inter-state borders, said his government will set up police outposts along the Assam border, adding several locations have been finalized for these posts. “Setting up posts in the sensitive locations will depend on the talks between both governments,” said Sangma.

The border situation with Arunachal Pradesh is equally disturbing. The people living there have alleged regular harassment from the authorities in Assam. Reports have emerged that armed personnel of the Assam police recently destroyed a paddy field in the Longding district bordering Assam.

Speaking to the media, senior Opposition MLA from Arunachal Pradesh Ninong Ering said Assam was behaving like a big brother and that it has no right to bully the neighbouring states.

Ering said he spoke with local residents in the area and termed minor arguments a regular affair.

However, Assam government sources said a total of 69,010.82 hectares of land has been occupied by the four neighbouring states. In a statement in the recently concluded Assam assembly session, Chief Minister Himanta Biswa Sarma said that two separate cases against Nagaland and Arunachal Pradesh are going on in the Supreme Court to settle the border disputes.

Meanwhile, reacting to the FIR filed by the Mizoram government, Assam CM Sarma said that he would be happy to join any investigation. “Why is the case not being handed over to a neutral agency, especially when the place of occurrence is well within the constitutional territory of Assam? I have already conveyed this to (CM) Zoramthanga”.