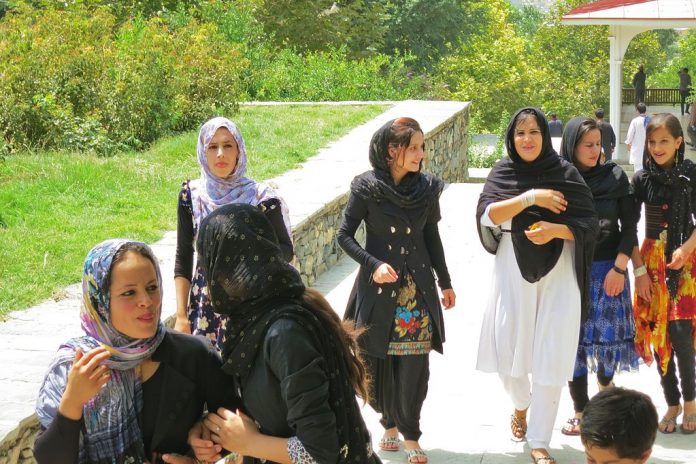 Afghan women in Kabul before Taliban takeover: It is still unclear if the Taliban will allow women to attend school, work or participate in politics. Pic: Ninara from Helsinki, Finland/Wikipedia

The Taliban “will hurt women the most” irrespective of their assurances of upholding women’s rights after they seized power in Afghanistan, said the country’s first woman pilot.

Niloofar Rahmani, a former Afghan air force pilot, warned people not to rely on the promises made by the Taliban adding that a woman will soon be stoned for no reason in Kabul stadium.

The 29-year-old former pilot, who had sought asylum in USA in 2016, said that the world will witness what Taliban is going to do. “They are going to stone a woman in Kabul stadium again for nothing,” Rahmani told Fox News, reported India Today.

Rahman was upset since her family was still in Afghanistan. And after she heard what happened in Afghanistan, she could not sleep nor get “mind together”.

Also read: Women take to the streets of Kabul to protest for their rights

“I am so in fear for their security. And, of course, it hasn’t been only about me,” Rahmani said, adding that her family and parents were in danger.

They have been targeted by the Taliban for supporting her throughout her career.

Niloofar Rahmani had become Afghanistan’s first woman pilot in 2013 and the first to pilot fixed-wing aircraft. She had left Afghanistan for the US in 2015 to do an 18-month training course in the USA. The next year, Rahmani had sought asylum.

However, she had been receiving death threats from the Taliban since 2013, she said, media reports added.

Rahmani’s observations come in the wake of the Taliban promising to respect women’s rights within the Islamic law on Tuesday (August 17). They also said they will forgive people who had fought against them and not allow Afghanistan to become a terrorist’s haven.

People have been frankly sceptical about the Taliban’s promise on women’s rights, which they feel have been made just to placate world powers and Afghan citizens huddled inside their homes in fear.

Taliban collapses with laughter as journalist asks if they would be willing to accept democratic governance that voted in female politicians – and then tells camera to stop filming. “It made me laugh” he says.pic.twitter.com/km0s1Lkzx5

The Taliban fighters were unable to answer because they had collapsed laughing at her question and told the journalist to immediately stop filming.

One Taliban fighter can be heard saying, “It [the journalist’s question made me laugh.”

After President Ashraf Ghani fled the country, Afghanistan fell into the hands of the Taliban. On August 19, the Taliban celebrated Afghanistan’s Independence day to mark their victory against the US.

Until now, the Taliban have not provided a glimpse into the government they plan to lead except to state that they will be guided by Sharia, or Islamic, law.

Meanwhile, after the Taliban’s takeover of the Afghan capital on August 15, Shabnam Dawran, a popular news presenter in the state-run TV network was fired and told to “go home” along with all her female colleagues, said a report by Gandhara, Radio Free Europe/Radio Liberty, a network of local journalists in Afghanistan and Pakistan.

A Taliban militant flanked by a white Taliban flag took her place in the Radio Television Afghanistan (RTA) studio in Kabul on August 17, reading out statements by the militant group’s leadership.

In an August 18 post on Facebook, Dawran said that when the system changed, she had still wanted to report to work. “I didn’t lose my courage but unfortunately I was not allowed to [work],” she said. A female presenter did, however, interview a Taliban official live on Tolo TV, the country’s largest private TV station.

It is still unclear if there’s a broader shift in the Taliban’s stance toward independent media and women working outside their homes – something that is generally prohibited by the militant group, said the Gandhara report.

During their earlier rule from 1996 to 2001, they had banned women from attending school, work or participating in political events.

Who could win FIFA World Cup in Qatar? Data s...

2:24 PM, 27 November, 2022 0
AAP leader Satyendar Jain is getting special treatment in Tihar jail in Delhi, with around 10 men tending to his needs, according to reports and videos that have emerged.