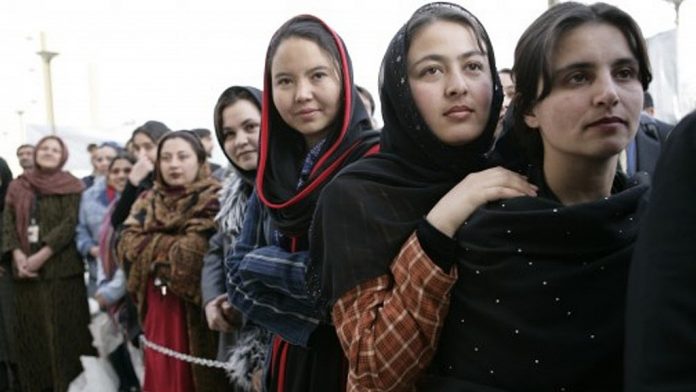 Afghan women have made great progress in the past 20 years since Taliban's ouster in 2001 and have even reached Parliament. It would be difficult for them to go back to the way they were in the past. Pic: Wikipedia

Women in Afghanistan dread the return of Taliban’s regressive rule in the country. Afghan women, who have made great progress and have even made it to Parliament today, fear that they would have to live through those harrowing “same dark days” of Taliban rule from 1996-2001. That was a time when women were forced to stay at home and forbidden to study or go to work. Neither could they step out of their homes without a male escort.

An Associated Press (AP) report quoting families fleeing their homes and taking refuge on the sidewalks and parks in Kabul said girls riding home in a motorised rickshaw in the Takhar province in northern Afghanistan were stopped and lashed for wearing “revealing sandals.” This area had been captured by the Taliban in early August.

Also, the same report claimed that a schoolteacher in the province revealed that the women were told not to visit the market without a male escort.

United Nations Secretary-General Antonio Guterres too expressed his apprehensions over  shocking reports of Taliban oppression of Afghan women and girls. He said he was “deeply disturbed” by news filtering in that Taliban was imposing severe restrictions on human rights in the areas under their control, particularly targeting women and journalists, said Guterres, added the HT report.

Further, AP also interviewed Zahra (name changed) who had been working from home but has stopped working after the Taliban took over Herat. She tearfully admitted that she is clueless when she will be able to return to work again.

Zahra told the reporter that she is apprehensive that she won’t be able to play the guitar nor will her brother be able to play football. Afghan women who had even reached the Parliament in the last 20 years will now be forced to retreat to their homes.

Her 12-year-old sister will not be able to continue going to school though she loves learning, she added. These women like Zahra, may have not lived under Taliban rule but they are well-acquainted with the regressive diktats of the Taliban and how they had carried out public executions and stoned women accused of adultery.

According to a HT report, Zarmina Kakar, a 26-year-old women’s rights activist in Kabul, was just a year old when the Taliban entered Kabul for the first time in 1996. She remembered how her mother had taken her out to buy her ice-cream and she had been whipped by a Taliban fighter for revealing her face for a couple of minutes.

She fears that if the Taliban returns to power they will have to return to the “same dark days”.

Afghan women have made great progress in the past 20 years since the Taliban’s ouster in 2001. Girls are going to school and are being seen in Parliament, government and business today, she said. The situation today makes Kakar feel like a bird who makes a nest for a living and spends all the time building it, but then suddenly and helplessly watches others destroy it.

Marianne O’Grady, Kabul-based deputy country director for CARE International, too agreed that Afghan women had made remarkable strides in the past two decades particularly in urban areas. She did not think the women would be able to turn back the clock and go back to the way they were in the past even if the Taliban took over the country.

“You can’t uneducate millions of people,” she had pointed out, said an AP report carried by various media houses. If women retreat behind walls and if they are unable to step out of their homes, they will now be in a position to educate their cousins, their neighbors and their own children in ways that couldn’t happen 25 years ago, she added.

But anxiety mounts among women as Taliban forces control most of the country, including capital Kabul, Herat and Kandahar, three of the largest cities of the country.

Meanwhile, the U.N. refugee agency too added that nearly 2,50,000 Afghans have fled their homes  fearing Taliban would reimpose their ruthless interpretation of Islam, which all but eliminates women’s rights. Eighty percent of those who have been displaced from their homes are women and children.