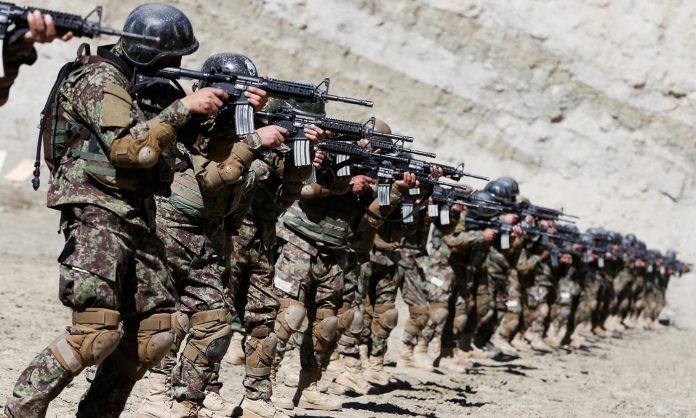 The Ashraf Ghani government received billions of dollars to pay for soldiers' salaries and equipment -- mostly by the US. File Photo

Barely three days before Kabul capitulated to Taliban’s rapid strides back into Afghanistan 20 years after the Islamist group was ousted in the days following 9/11, US President Biden spoke of his power of relinquishment: “Afghans must fight for their country.”

He was stating the obvious – in the nastiest of its nuance. The Afghan defence forces were surrendering one town after another; there were reports that several of them ran short of ammunition and food, while many others simply gave in. That was America’s longest war winding to a grinding halt.

“Look, we spent over a trillion dollars over 20 years, we trained and equipped with modern equipment over 300,000 Afghan forces,” Biden said bolstering his claim for a quick exit from a disaster his country has shaped. The Taliban are in Kabul, the US has all but gone and Afghanistan is back in the throes of a civil war.

How did it happen so quickly, so comprehensively and so viciously that the Afghan defence forces, with all the modern equipment at their disposal, just melted away?

This week, a leaked US intelligence report said that Kabul could come under attack within weeks, and the government could collapse within 90 days.

The turn of events in decades of Afghan war would make it appear that Western forces have not been able to understand who Taliban is or are (Talib in Arabic means ‘a seeker of truth’/a student; a distorted plural noun of it is Taliban). Taliban are a rag-tag group of militants fed on the puritanical meanings of Islam by the Pakistan Army. Pakistan in order to regain the so-called strategic depth after the ouster of communist/Soviet-supported Najibullah government converted the wider Mujahideen movement into the Taliban revolution.

The root lies in Pakistan

Pakistan’s master tactic has proved to be a blunder in meeting its long-term objective of ‘strategic depth.’ When the US-led Operation Enduring Freedom ousted the Taliban from power in Afghanistan in 2001, those groups took shelter back in Pakistan. It is a well-known fact that the top leaders of Taliban – Maulawi Hibatullah Akhundzada, Mullah Ghani Baradar and Mullah Abdul Hakeem – have their residences in Karachi and elsewhere in Pakistan. Pakistan walked on a razor’s edge: on the one hand, it stood with US-led coalition forces, and on the other, it continued to support Taliban. The US knew of Pakistan’s duplicity.

A retired US Army Reserve colonel, who served in Afghanistan, Iraq and on a humanitarian mission to West Africa, accused Pakistan of its duplicity that has “caused the United States to lose in Afghanistan.”

“For over 17 years we have wrongly applied counter-insurgency doctrine to a proxy war waged by Pakistan against the United States and Afghanistan. At the same time, we supplied Pakistan with generous aid packages to bribe them from pursuing a course of action opposed to our own, which they considered in their national interest,” said Lawrence Sellin in his article published by The National Interest.

Documents, made available by WikiLeaks, suggested that Pakistan, an ostensible ally of the United States, allowed representatives of its spy service to meet directly with the Taliban in secret strategy sessions to organize networks of militant groups that fight against American soldiers in Afghanistan and even hatch plots to assassinate Afghan leaders.

Pakistan, at the insistence of the US-led forces in 2014 launched a military Operation Zarb-e-Azb against various militant groups, including the Tehrik-i-Taliban Pakistan, the Islamic Movement of Uzbekistan, the East Turkestan Islamic Movement, Lashkar-e-Jhangvi, al-Qaeda, Jundallah and the Haqqani network. Hundreds of innocent Pathans on the Pakistan side were detained or killed. From then on, the Taliban came to hate Pakistan. Yet Taliban leaders were allowed to stay on in Pakistan with the military establishment of the deep state continuing to mollify the Taliban leadership.

Pakistan faced the most difficult challenge when, first the Tehrik-i-Taliban Pakistan (TTP) (the native Pakistani rebel version) and later the Taliban – on the lines of all Afghan rulers – let it be known that they don’t accept the Durand Line as the international border.

Also read: US forces to man ATC, to deploy 6,000 troops at Kabul airport

Dozens of terror attacks took place in Pakistan; the most gruesome was the attack on the army-run primary and secondary school in Peshawar on December 16, 2014. As many as 150 people, including 134 students, were killed in a suicide attack carried out allegedly by TTP. In response, Pakistan reinstated the death penalty after a six-year moratorium and executed many suspected Taliban militants.

The Taliban got a big window of opportunity last year. The United States and the Taliban on February 29, 2020, signed a milestone deal in America’s longest war. Accordingly, the majority of U.S. troops were expected to withdraw from Afghanistan by the end of 2021. In turn, and if this agreement is successfully implemented, sections of the Taliban could be expected to play a larger role in Afghan politics.

The Afghan security forces numbered over 300,000, on paper at least. That includes the Afghan army, Air Force and the police. The Afghan army and police have a troubled history of high casualties, desertions and corruption — with some unscrupulous commanders claiming the salaries of troops who simply didn’t exist, the “ghost soldiers”.

In its report to the US Congress, the Special Inspector General for Afghanistan (SIGAR) expressed “serious concerns about the corrosive effects of corruption… and the questionable accuracy of data on the actual strength of the force”.

Jack Watling, of the Royal United Services Institute, said even the Afghan army has never been sure of how many troops it actually has, BBC reported. Added to that, he said, there have been problems with maintaining equipment and morale. Soldiers are often sent to areas where they have no tribal or family connections.

That explains, partly, why some may have been so quick to abandon their posts without putting up a fight.

The Taliban’s strength is even harder to measure. According to the US Combating Terrorism Center at West Point, estimates suggest the core strength of 60,000 fighters. With the addition of other militia groups and supporters, that number could exceed 200,000.

BBC quoted Dr Mike Martin, a Pashto-speaking former British army officer who tracked the history of the conflict in Helmand in his book An Intimate War. He warned of the dangers of defining the Taliban as a single monolithic group. He said the Taliban is closer to a coalition of independent franchise holders loosely — and most probably temporarily — affiliated with one another.

He notes the Afghan government, too, is as riven by local factional motivations. Afghanistan’s shape-changing history illustrates how families, tribes and even government officials have switched sides – often to ensure their own survival.

The Afghan government should have the advantage in terms of both funding and weapons. It has received billions of dollars to pay for soldiers’ salaries and equipment — mostly by the US. In its July 2021 report, SIGAR said more than $88bn had been spent on Afghanistan’s security.

But it said: “The question of whether that money was well spent will ultimately be answered by the outcome of the fighting on the ground.”

Afghanistan’s Air Force should have provided it with a critical edge on the battlefield. But it has consistently struggled to maintain and crew its 211 aircraft. Nor is it able to meet the demands from commanders on the ground.

The Taliban have often relied on revenue from the drugs trade, but they have also had support from outside — most notably Pakistan. The Taliban have seized weapons and equipment from the Afghan security forces, some of it provided by the US including Humvees, night sights, machine guns, mortars and artillery.