For the longest time, king cobras were considered to be a monotypic genus. This means the world’s longest venomous snakes all over the world were regarded as a single species under the genus Ophiophagus.

A new study however proves otherwise. Wildlife biologist P Gowri Shankar has now shown that there could be multiple species of king cobras. “The king cobras (Ophiophagus hannah) could represent a species complex which means there could have multiple species,” says the study titled “King or royal family? Testing for species boundaries in the King Cobra, Ophiophagus hannah (Cantor, 1836), using morphology and multilocus DNA analyses”, published recently in Elsevier’s ‘ScienceDirect’.

“We analysed the DNA of king cobras from across their distribution and discovered that king cobras were not a single species but composed of four divergent lineages that are waiting to be formally described as species,” says Gowri Shankar, king cobra conservationist and lead author of the study.

“These lineages are geographically separated and found in the Western Ghats, Indo-Chinese region, Indo-Malayan region, and the Luzon island in the Philippines,” he adds.

“It is a remarkable finding that the world was looking forward to. Spending close to a decade on this with this diverse team was worth every minute as these results have set the baseline for all further work related to king cobra conservation,” asserts Gowri Shankar, who was instrumental in initiating the pioneering radio telemetry study on king cobras and was able to discover the secret life of these serpents two decades ago. 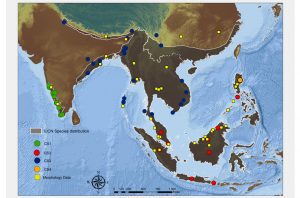 King cobras have long roamed the jungles of south and south-east Asia. They occur in varied habitats ranging from the tropics, subtropics and temperate areas. They are found in the wet regions of the Western and Eastern Ghats of Peninsular India and the Andaman Islands, the Himalayan foothills of northern India (Uttarakhand), east across northeast India to southern China, and across south-east Asia all the way to the Philippines.

The study, according to Gowri Shankar, will help assess which species of king cobras need immediate attention and what conservation measures are required.

“In our study, we tested for species boundaries in one such widespread species, the king cobra, Ophiophagus hannah (Cantor, 1836), a tropical elapid snake distributed across the Oriental realm. Studying the venom composition of these species will have a direct impact on the efficacy of anti-venom and snakebite mitigation,” shares Gowri Shankar.

He is the founder of the Kālinga Centre for Rainforest Ecology, an environmental education facility that welcomes people to learn scientific tools of conservation through workshops and camps at Thirthahalli in Shivamogga district of Karnataka.

As part of his PhD, Gowri Shankar teamed up with a large international group to unravel the evolutionary history of king cobras. He collaborated with the likes of Wolfgang Wuster, Bangor University and Indraneil Das, University of Sarawak, Malaysia. And was supervised by S K Dutta and Gunanidhi Sahoo in Odisha, Jacob Hoglund in Sweden and Kartik Shanker at the Indian Institute of Science, Bangalore which had hosted his work.

Many young researchers have been involved with the study. Gowri Shankar also collaborated with the state forest departments of Karnataka, Odisha, Kerala, Tamil Nadu, Andaman Islands, Goa, Mizoram and Uttarakhand to collect samples and tissues from zoos and museums.

The king cobra is categorised as ‘vulnerable’ under the IUCN Red List of Threatened Species Assessment (IUCN, 2012) and listed in Appendix II of the Convention on International Trade in Endangered Species of Wild Fauna and Flora (CITES). Habitat destruction, skin trade, poaching for food, medicine and pet trade threaten king cobra populations.

Gowri Shankar, who has over 20 years of experience working with captive and wild snakes, is known for his work on king cobra conservation. He has rescued more than 375 king cobras, monitored 50 nests, and released more than 500 king cobra hatchlings back to the wild.