At least 30 king cobra (Ophiophagus hannah) hatchlings were secured and released into a protected area of the forest in Chikkamagaluru (Karnataka).

The two-month-long incubation drive, executed by a team of volunteers from the Agumbe-based Kalinga Foundation, was guided by king cobra biologist P Gowri Shankar.

King cobra is the world’s longest venomous snake and is the only snake known to build a nest to lay eggs and protect them.

The story began on May 17, 2021, in Bilagali village of Chikkamagaluru district where a coffee plantation worker spotted a female king cobra sitting on a pile of leaves. Knowing the significance of the situation, he immediately realised that a female king cobra was guarding her nest. However, the villagers’ foresight in expecting a brood full of king cobra hatchlings in the vicinity was not welcome. They called Rizwan, a local snake rescuer, to relocate the snake and the nest from the area. Rizwan and the team of WildCat-C, an NGO, sought help from Gowri Shankar, a king cobra biologist, to ensure that the snake and her eggs are safely relocated.

“Under pressure from locals, Rizwan had to relocate the female king cobra before opening its nest. King cobras build a well-engineered nest to guard the eggs against heavy monsoon rains. The nest chamber is tightly packed and covered with layers of dry leaves to ensure right temperature and humidity while keeping the eggs dry. A disturbed nest is as good as killing the progeny,” said a release from the Kalinga Foundation, an NGO in Guddekere, Thirthahalli Taluk, focusing on ecological research to impact a positive change for conservation.

Gowri Shankar is known for his work in saving the king cobra and has more than 20 years of experience working with captive and wild snakes. He has rescued over 375 king cobras till date, monitored 50 nests, and released at least 500 king cobra hatchlings back into the wild. 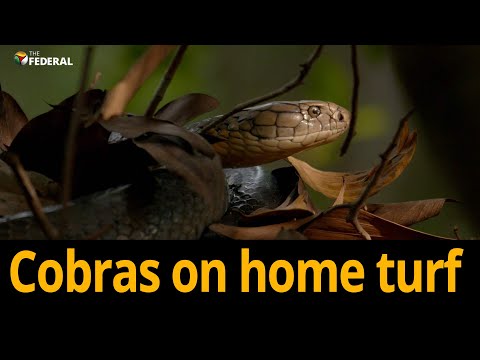 Gowri Shankar asked Rizwan and the forest department team to shift the eggs into a cardboard box. He managed to reach the office of the forest department in the early morning hours the next day itself. “About 38 eggs were counted and gently transferred into cushioned compartments in plastic boxes and carefully transported to the Kalinga Foundation field site at Guddekere, Agumbe,” said Gowri Shankar, who is a key member of the team that introduced the radio-telemetry project on king cobras for the first time in the country at the Agumbe Rainforest Research Station (ARRS).

An artificial incubator was set up on the campus of the Kalinga Foundation for the purpose where temperature and humidity were monitored throughout the day. The forest department was updated at regular intervals.

“On July 25, the first baby king cobra slit opened its eggshell and popped its head out. Over the next one week, 30 eggs successfully hatched. Of the eight eggs that did not hatch, four were infertile, while the other four had not developed- possibly due to early disturbances at the nest site,” said Gowri Shankar. “Under natural conditions, baby king cobras remain close to the nest, surviving on remnants of the yolk, shed their skin, and then disperse into the forest. To emulate similar conditions, king cobra hatchlings were kept until they shed their skin.”

On August 11, the king cobra hatchlings were handed back to the forest department. Amidst the presence of forest officials, Gowri Shankar helped release the hatchlings back into the forests of Chikkamagaluru.