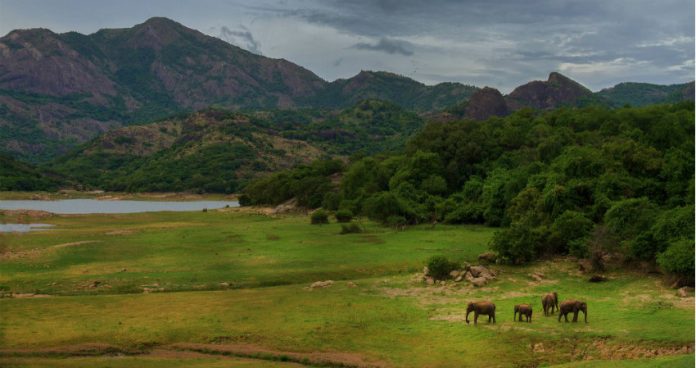 The Anamalai Hills: Many tea plantations in southern India plant the lean trunked, non-native silver oak trees instead of native trees like the fig with their large canopies

It is a well-established fact that organic farming helps in conserving bird species. And, the rampant use of agrochemicals does not boost bird population. However, a recent study interestingly has discovered that to attract the birds, tea plantations in south India need to focus more on growing a rich variety of native trees rather than concentrating on whether to use conventional or organic farming methods.

This major research finding was published in Current Science titled ‘Native shade trees aid bird conservation in tea plantations in southern India’. The study, which was conducted by the scientists from the Nature Conservation Foundation, Mysuru was carried out in the Anamalai Hills in the Western Ghats.

No doubt organic farming is better to bring in the birds, but mixed-shade (means native trees of different varieties) tea plantations are even better.

In south India, most tea plantations are typically grown as open monocultures with less tree cover. Often, the plantations have single tree species such as the towering silver oak and it is rare a plantation will sport a wide range of trees.

The shade of a tree, and its role

Trees are often planted inside coffee and tea plantations since it is believed that tea and coffee plants grow well under the shade provided by the wide canopy of trees. These trees provide shade to the tea and coffee bushes and protect them from too much sunlight which could suck out the moisture from the soil. The trees allow only a small amount of light to filter through which helps in the photosynthesis of the tea leaves.

In many plantations, the lean trunked, non-native silver oak trees are planted instead of the native trees like the fig with their large canopies. The tea plantations commonly prefer the silver oak, since its branches are less and the pruning gets done easily. Also, once the trees are cut down, the timber can be sold for a good price.

The authors made this observation in their study: “Earlier studies documented that conventional tea plantations, with sparse silver oak trees that are non-native, have much lower diversity of birds than the forest habitat. But in this study, we have documented variation in bird communities in different kinds of tea plantations.”

For this study, the researchers surveyed bird communities in five habitat layers such as conventional tea (where agrochemicals are used and has the silver oak shade), organic tea (where organic farming is carried out along with the silver oak shade), mixed-shade tea (where conventional farming is carried out but with mixed-shade canopy), rainforest fragment (a degraded forest, which was the result of past logging) and continuous forest (a large contiguous tract of rainforest).

In conventional tea plantations, where trees have less canopy, one can find mostly terrestrial or shrub layer birds (where the birds can be found foraging and nesting in low bushes).

These birds are mostly insectivorous or omnivorous. In these plantations, due to heavy use of pesticides and fertilisers, there would be less insects to prey on for the birds. While, in the organic tea plantations, the prey abundance would be moderately high and bird variety would be more.

The study also indicated that the species richness is fairly similar in fragmented forest as it is in the continuous forest. However, the study pointed out: “While conversion of existing conventionally managed tea estates to organic tea or diverse native shade tea can be beneficial for biodiversity, any conversion of fragmented or contiguous forests to tea plantations will have detrimental effects on birds”.

Mutual benefits for birds and tea

One of the major key findings that emerged from this study was that the mixed-shade tea plantations have relatively higher bird species than conventional and organic tea plantations.

“We do see several rainforest birds in these types of plantations but it doesn’t mean that we can clear the forest and make it a mixed shade plantation. Certain birds occur in rainforests in protected areas and rainforest fragments do not occur in conventional tea plantations. If we have more native shade trees such as wild figs, jackfruit trees, in conventional tea plantations it will be beneficial for the birds as well as for tea production,” said P Jeganathan, one of the authors of the study.

As tea cultivation occurs mainly in tropical and montane regions noted for their high biodiversity, it has raised concerns related to sustainability and conservation of native species, he said.

“Native trees are also important for sustainability in tea and coffee plantations, where they may bring multiple benefits such as increased yields, improved soil nutrition through decomposition of shade tree leaf litter, higher native biodiversity and pest control,” he added.

Tea plantations that are both organic and have mixed-native shade trees could possibly be even better for forest bird communities, although such a site was unavailable for comparison in the present study, the authors admitted.

Overall, in the short term, the conversion of conventionally managed tea plantations to organic estates could bring environmental and commercial benefits, and in the long term, incorporating multi-species native shade trees could help in carbon sequestration benefit biodiversity, the study claimed.