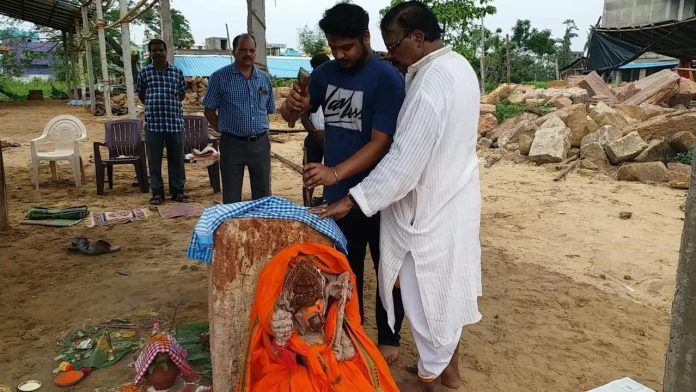 Smitesh with his grandfather, the late renowned sculptor from Odisha - Raghunath Mohapatra

The sound of stones, chisels and hammers, after months of forced, grief-stricken lull, have come alive again. And, with the revival of these sounds, the chase to make a long-cherished unfinished dream come true will begin.

The dream that needs to be given shape involves the ambitious project of acclaimed sculptor, the late Raghunath Mohapatra to build the Adityanarayan Temple – a replica of the world famous Sun temple at Konark in Odisha’s Puri district. Mohapatra’s grandson, the 24 year old Smitesh Mohapatra, has mustered up courage and seems committed to fulfill the wishes of his grandfather, the Padma Bibhushan recipient and Rajya Sabha Member to build the prestigious Adityanarayan (another name for the sun) temple. The work had come to a standstill when COVID had struck a mortal blow.

In May this year, the entire state was stunned to learn the death of Raghunath and his two sons, including Smitesh’s father Jashobanta and uncle, Prasanta, a former captain of the Odisha Ranji Trophy Cricket team –one after the other in a space of less than two weeks.

“COVID has hit us very hard, it will take a long time for us to recover from the shock,” says Smitesh, an MBA, who is a top order batsman at a premier cricket club in Bhubaneswar. Smitesh took to learning stone crafting in 2018.

Showing his prized possession – an assortment of tools – Smitesh recalls that extremely happy with his decision to work on this special project, his grandfather had presented him with a notebook and his personal toolset in 2018. The veteran artist had also blessed the new student on the occasion of his initiation.

“My grandfather’s workplace, the Raghunath Mohapatra Art and Crafts Foundation and his dream is alive,” announces Smitesh.

An ardent devotee of lord Jagannath, Raghunath’s creations include the six-feet-tall gray stone statue of the Sun god at the Central Hall of Parliament; the lotus sculpted on black granite at the Rajiv Gandhi samadhi; Vir Bhumi, the majestic Mukteswar Gate in red sandstone at the Surajkund crafts-fair complex, near Delhi and Buddha statues in monasteries at Ladakh, Japan and Paris. He also had conceptualised and designed a number of temples in Odisha, Bangalore, Vishakhapatnam, as well as Nigeria.

In 2013, the maestro had envisioned the Adityanarayan temple, and had subsequently  purchased 100 acres of land near Satyabadi, along Puri-Bhubaneswar highway for the purpose.

While it had taken 1,200 sculptors and twelve years to create the original 13th century masterpiece built during the period of Narasingha Deva 1 of the Eastern Ganga Dynasty, Raghunath believed he could complete the task with 600 sculptors in eight years at a cost of  ₹300 crores.

In his lifetime, Raghunath had trained over 2,000 sculptors. “He was an institution, someone who’s just passionate about his art,” recalls a seasoned sculptor. He used to supervise the sculptors and his son Jashobanta helped him to manage the affairs of the foundation, located at Sisupalgarh, situated in the outskirts of Bhubaneswar. With both gone, now, everything rests on Smitesh’s young shoulders.

Smitesh intends to move cautiously, step by step. He is focused on completing the projects which had been stalled due to the tragedy and COVID. Just a day after returning from Bihar where a temple is being built, he is set to visit Raipur, Chhattisgarh for another such job.

“We will try to fulfill my grandfather’s cherished wish. I will give my best to make it a reality,” intones Smitesh.

He is aware of the enormity of the project. “It’s a huge task, but not impossible to achieve,” he believes. What boosts Smitesh’s confidence is the support and guidance of many seasoned sculptors, who are long-time associates of his grandfather. “We all will work together as a team,” he shares.

One of them is Keshab Maharana (65), who had learned the art from Raghunath and has been with him for over four decades, the others include Ajit Mangaraj and Gangadhar Moharana, both masters in their art. Keshab remembers how Guruji (Raghunath) would often discuss the Adityanarayan temple with him.

“We were sure, he would make it a reality,” he recalls. Others nod their heads in approval. A few meters away stand the two gigantic wheels and sidewall of the project, which had been created by them, before the pandemic. However, Keshab hasn’t lost hope. “There are so many talented artists in the state, they have the expertise and can recreate another Black Pagoda.”

Meanwhile, the entire team of craftsmen is busy skillfully working on the stones, silently. Life inside the workshop, they call it a factory, is on its way to getting back to normal. One thing is evident though: despite its devastating effect, COVID has surrendered before art and the spirit of artists.