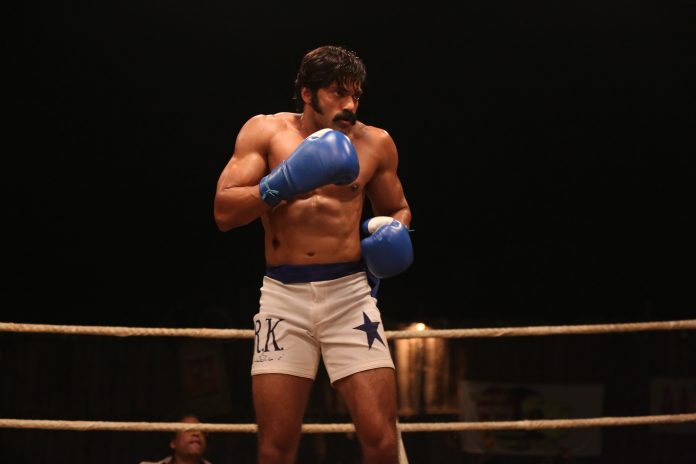 Arya in a film still from Sarpatta Parambarai: This is arguably one of the few movies in the Tamil film industry, which weaves in the names of real political parties such as the two Dravidian majors – the DMK and AIADMK – into the story

Pa Ranjith’s ‘Sarpatta Parambarai’ is being received well not only for its story and casting but also for documenting Tamil Nadu politics of the 1970s on celluloid. This is arguably one of the few movies in the Tamil film industry, which weaves in the names of real political parties such as the two Dravidian majors – the DMK and AIADMK – into the story.

The names are not tweaked to be on the safer side. While Pa Ranjith, one of the finest Tamil filmmakers now, has more or less got the political sequences and references right, some believe the film has inadvertently shown the AIADMK in a bad light.

One of the first scenes in the film revolves around a boxing match between Sarpatta Parambarai and Idiyappa Parambarai. The most important and iconic players of the respective Parambarai are clashing with each other in the match, and the players are brought to the ring by their ‘Vaathiyars’ (masters). When they enter the ring, the players wear a robe featuring the symbols of the political parties they favour.

While Meeran of Sarpatta Parambarai wears a robe with red and black colours and the rising sun symbol of the DMK, Idiyappa Parambarai’s Vembuli is clad in a white coloured jacket bordered with a Congress flag. The clash between Meeran and Vembuli does not just emphasise the rivalry between the two Parambarais but also seems to suggest that the simmering discord between the DMK and the Congress will make them cross swords in the near future.

In the prize distribution ceremony after this match, a DMK cadre gives away the prizes and delivers a speech. The character was loosely built on Ilamparithi, a real-life DMK functionary of north Chennai.

Emergency and the DMK

On June 25, 1975, the then Prime Minister Indira Gandhi invokes Emergency in the country. On 1976, January 31, the DMK government was dismissed because they were against the Emergency and did not fall in line with the Centre. On the same day, the match between Kabilan and Vembuli takes place, and Kabilan is almost winning the match when a police official rushes in and tells Rangan to stop the match. And, when the police arrest him, Rangan proclaims that he is a proud DMK cadre. “I am not scared of anyone. You can arrest me after the game ends,” he says.

It is interesting to see that a character in a film belongs to a particular party, which is a real party and not a ‘reel party’. Using the chaos that breaks out in the audience following the news of the DMK government’s dismissal, one of the supporters of Idiyappa Parambarai attacks Kabilan. When Kabilan is in the hospital, his well-wisher ‘Daddy’ tells him that even Stalin, Karunanidhi’s son has been arrested. During this scene, real black and white footage of the arrests during the Emergency is shown.

When Rangan is released from prison, there are no big leaders to greet him except for a few followers. One of the followers informs him that Vellore Mudaliyar was unable to come to the prison to receive him since he was at another meeting. Though in real life there was no such character called ‘Vellore Mudaliyar’ the film seems to refer to the dominance of the Mudaliyar community in the DMK.

In those days, cadres like Rangan had no position in the party; neither did they have any say in the government. But they earned the respect of the people and the party only through sheer hard work for the party. They had goodwill and used it to help others get a job.

Emergency and the AIADMK

Due to Rangan’s arrest and the unsettling political conditions of that time, there was a break in organising boxing matches. The hero, Kabilan, who once worked in a factory, now becomes unemployed.

It is a well-known fact that AIADMK was a strong supporter of the Emergency. In order to show his unwavering support, the party chief MG Ramachandran undertook a padayatra in order to strengthen Indira Gandhi’s 20-point agenda.

During this period, the prohibition was imposed and many started illegal breweries. At this time, in the film, Vetri Selvan, a boxer who was neglected by his father Rangan, becomes an AIADMK cadre and starts manufacturing illicit liquor. He also ropes in Kabilan as a henchman, who slowly gets addicted to alcohol.

In one scene, Kabilan’s wailing mother says that she does not allow her son to learn boxing only because his father who was also a boxer became a henchman running errands for politicians. It was the practice that when players lost their prowess in the ring and did not get any employment, they became mercenaries. While in north Chennai, the boxers become henchmen, in southern Tamil Nadu like Madurai, Tirunelveli and Thoothukkudi, some kabbadi players in the past turned into political killers.

This boxing film, however, has shown AIADMK in a bad light. In real life, it was MGR who brought boxing icon Muhammed Ali to Chennai in 1980 to raise funds for the Amateur Boxing Association.

In a statement, AIADMK leader D Jayakumar, who is from Royapuram in north Chennai, said the film has buried this vital incident.

“Not only in boxing,  MGR also excelled in other sports like maan kombu (a type of martial art), fencing and horse riding. In most of his films, he showcased himself as a sportsman. Inspired by his films, many of his fans took up sports,” he claimed.

He also added that Ranjith, who attacked the DMK often in the past, “chose to remain silent now”.

In Pa Ranjith’s films, images of Dr BR Ambedkar in the backdrop are inevitable. In this film too, there are references to Ambedkar and Buddhism. But what is more interesting is besides talking about Dravidian majors, the film also shows Indian Republic Party (IRP), which has its roots in Ambedkar’s Scheduled Caste’s Federation.

In the climax scene, before the grand finale clash between Kabilan and Vembuli, the members of IRP gift a blue colour (which is the colour of Ambedkarites) robe to Kabilan.

These political undercurrents run through the film, one section of society, particularly the fishing community feel that the achievements of their forefathers were blacked out.

“Though boxers hailed from many communities, boxers from the fishing community were dominant in ‘Sarpatta Parambarai’. The epicentre of Sarpatta Parambarai was Panaimara Thotti, a place in Royapuram,” said Bhagath Veera Arun, a researcher from north Chennai.

According to him, Nat Terry, an Anglo-Indian was an invincible boxer at that time. He was beaten by a fisherman named Githeri Muthu.

“Attracted by Muthu’s play, in fact, Periyar (the Dravidar Kazhagam founder) bestowed the title of ‘Dravida Veeran’ on him. Lately, Muthu’s sons Anbu Muthu and Arumai Muthu run a boxing club”, he added.

“We understand Ranjith’s objective of showing the hero as a Dalit, who emerges victorious. But, he should not do that at the cost of blacking out the fishermen’s achievements,” says Arun. However, to give Pa Ranjith his due, towards the end of the film, it is a fisherman who finally trains Kabilan before the final match.