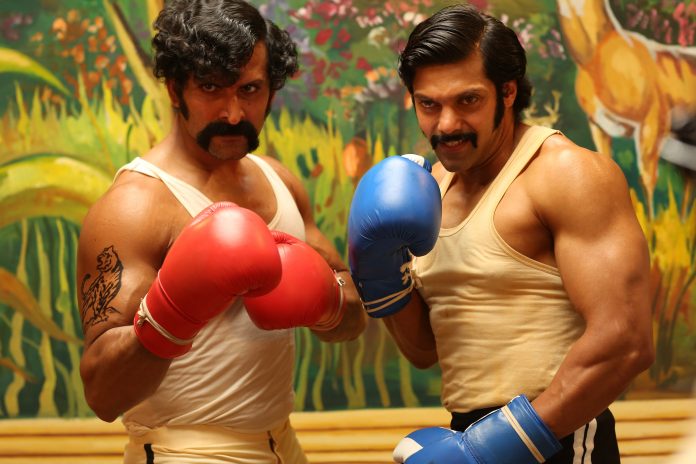 A still from Sarpatta Parambarai: Arya (Kabilan) and John Kokken (Vembuli) pose for a photograph for a poster to promote their grand boxing match in the film

‘Boxing is like observing penance, it requires patience and resilience’, says the veteran coach Rangan Vaathiyar of the Sarpatta clan, once the reigning champions, who sorely need a win inside the boxing ring to restore their injured ‘pride’.  Pointing out that boxing as a sport is about skill not aggression, Vaathiyar even casts aside his own son and picks a more capable young boxer to fight opposite an unbeatable opponent from the Idiyappa clan, their legendary rivals.

It is the sport and sportsmanship that is paramount here. The reverence and sheer passion with which it is pursued in a small subaltern community, are all effectively captured in Pa Ranjith’s action-packed boxing drama, ‘Sarpatta Parambarai’, which landed on Amazon Prime on July 22.

The director, Pa Ranjith, known for making hit mainstream movies asserting Dalit identity and Ambedkarite politics, takes a famed homegrown boxing culture in north Chennai this time and brings it to life on celluloid making it the cornerstone of the film. He also sets ‘Sarpatta Parambarai’ in the Madras of 1970s, against the political backdrop of the Emergency and the arrival of a charismatic leader, MGR on Tamil Nadu’s political scene.

The political events are just incidental, the plot stays focussed on the ferocious rivalry between the men who belong to these two local boxing clans and the vicious battle that breaks out among boxers in the Sarpatta clan itself. Like most boxing films, Pa Ranjith’s film too follows the familiar trajectory of an underdog who yearns to prove he is the champion – the Greatest – in the ring. As a viewer, you are also pulled into the fight to root for him.

But the problem with the film is that it takes some torturous twists and turns and drags on before we get to the grand finale bout. Disruptions to boxing come in the form of Indira Gandhi’s Emergency, which leads to the arrest of defiant DMK cadre who stand up to the autocratic Centre. (seems to match a mood that is developing in the state of late!) Incidentally, the director slips in some real live footage of the emergency at this point.

Also read: Always on guard so that I don’t slip back into depression: Deepika

Predictably, the film pays tribute to the boxing great, Muhammed Ali, who Pa Ranjith has said was a huge figure in the Dalit culture during that time. And, was a great inspiration for many in the working class because they identified with his “macho image, warrior spirit and skin colour”. In the film, the coach even trains the boxer with these words: ‘float like a butterfly and sting like a bee’.

As the credits roll in the end, Pa Ranjith too presents newspaper clippings and photographs of the late MGR, who was known to be a big boxing enthusiast, with Muhammed Ali, when the world-famous pugilist visited Madras in the 1980s for an exhibition match in Nehru stadium.

Sarpatta Parambarai’s story begins with a port worker Kabilan (a muscular looking Arya), who we quickly learn is crazy about boxing. He flocks to the boxing matches held in the area, is fiercely loyal to the Sarpatta clan and hero-worships his boxing icon – the coach Rangan Vaathiyar (played by Pasupathy). But his widowed mother warns him against boxing since his father, a legendary boxer, had gone astray turning into a strongman for local thugs and was ruthlessly killed.

But circumstances drag him into the boxing ring to restore the “pride” of the Sarpatta clan and Vaathiyar’s name. Kabilan turns out to be a natural and encouraged by his long-time friend Daddy (John Vijay), he takes up challenges like fighting Idiyappa’s star boxer, ‘Dancing Rose’ ( Shabeer Kallarakkal). The bout that takes place between Kabilan and ‘Dancing Rose’ is the best in the film. Kabilan emerges as the new champion on the block.

The film meanders after this and loses its way just like the character Kabilan veers away from his beloved sport. But the pace picks up again when Kabilan gets back into the path of redemption to fight the grand finale match against the unbeatable Idiyappa clan boxer Vembuli ( John Kokken).

The romantic track that plays out in the film is between Kabilan and Mariamma (essayed by Dushara Vijayan), who he brings home as his wife after a beautiful ceremony that involves a song and dance number. The intimate scenes between them are handled well, especially when Kabilan feeds his wife or when she romances him by the seashore. There are sub-plots on Kabilan’s festering enmity with Sarpatta clan members who are jealous of him.

The film which has Pa Ranjith’s stamp all over it is entertaining, and it lands a few punches and keeps you hooked. But at nearly three hours it seems like a long ride.

The characters however are all etched out well. Arya is sincere and works hard to want to play the role of his lifetime. He is convincing as a boxer and has clearly trained to give an authentic feel to the sport.

Dushara plays her limited role as competently as possible, while Pasupathy makes an impact as the respected coach with his restrained acting. Kalaiyarasan’s role as the neglected son with a chip on his shoulder, is ill-defined, while John Vijay’s character becomes a caricature at times. Kallarakal as Dancing Rose needs a mention, he stands out in this brief role.

The 48-year-old Tamil actor, Maran, who succumbed to COVID this year, is Maanja Kannan, who plays politics and uses the boxers for his own end. His swan song is played with gusto.

Many PaRanjith touches like Ambedkar photographs, resistance songs, political backdrops, a central symbol like the clock tower (in Madras it was a wall) among other elements are all there. The last song in the film has a rousing message: ‘you are your own hurdle and you are your own answer.’ To ignore roadblocks people put in front of you and to follow your own light. To work hard since destiny is around the corner, for as a dialogue in the film goes: ‘idhu namma kallam’ (this is our time)

While the art director manages to gives a feel of the times, the cinematographer Murali G makes the boxing scenes and Arya’s training shots for his final bout in the sea frankly memorable. There’s also a nod to Sylvester Stallone’s ‘Rocky’, as the camera follows Arya, wearing a blue silky robe, walking into the boxing arena for his high-stakes final match.

There is a scene in the film when Vaathiyar, angry with his student Kabilan’s descent into alcoholism and for working in the arrack business tells him scathingly that boxing is not so simple as wielding a knife. And, he shuns Kabilan saying the day he had taken a weapon in his hands, he had lost his credibility as a boxer. It is this spirit behind the film to respect the sport above violence that lifts it a few notches higher.

PK Warrier, who played a key role in popularising Ayurveda, dies at ...