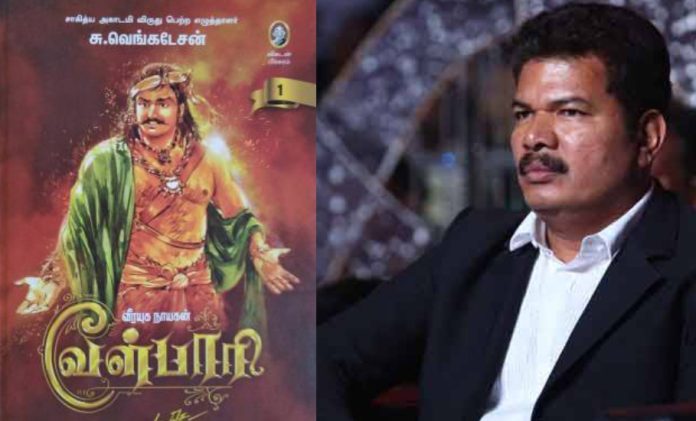 The celluloid adaptation of Su Venkatesan's 'Velpari' is expected to be a big budget, multi-lingual and pan-India film. Shooting is likely to begin in mid-2024

It’s reliably learnt that Shankar has roped in Bollywood actor Ranveer Singh to play the lead though other cast and crew details are strictly under wraps.

Velpari was a ruler of Parambu Nadu and surrounding regions in ancient Tamilakam towards the end of the Sangam era. The three most prominent kingdoms of ancient Tamil Nadu — the Cheras, Cholas, and Pandiyas — had fought against Velpari to conquer his Parambu Nadu. The war with the Cheras, Cholas, and Pandiyas dragged on for years as Paari put up a tough fight against the mighty army of the three kingdoms.

Velpari was also known for his benevolence and patronage of Tamil literature. He was a close friend of the Tamil poet Kapilar, and many references to Paari can be found in Sangam literature. Venkatesan’s novel talks about the greatness of Paari, his efficient administration, and why the mighty Cheras, Cholas, and Pandiyas wanted to defeat him.

Venkatesan told the story of this Velir king first as a series that ran for over 100 weeks in Tamil magazine Ananda Vikatan. The concluding piece of Velpari was published on November 29, 2018. The series was later launched as a book in 2019. Venkatesan is said to have done extensive research for the project poring through Sangam poetry and had travelled extensively to tribal settlements in the Western Ghats.

While Bollywood actor Ranveer Singh is set to play the titular role, the film will also feature an ensemble of actors from Tamil and other film industries in India. A veteran Tamil actor will essay the role of Kapilar. The friendship between Paari and Kapilar is another interesting aspect of this novel.

Just like Ponniyin Selvan, the film on Velpari too will be released by Shankar in two parts.

Shankar’s Sivaji, which had superstar Rajinikanth in the lead role, also had references to Paari’s daughters Angavai and Sangavai in one of the comedy scenes. Shankar is a big fan of the novel Velpari and he has been in talks with Su.Venkatesan for several years now to convert it into a film.

Shankar was meant to do a Hindi remake of his yesteryear blockbuster Anniyan with Ranveer Singh. But, Anniyan’s producer Ravichandran has taken Shankar and producer Jayantilal Gada to court on the grounds that they cannot make the film without his consent as he owns the copyright. He has even moved various film bodies to stop the proceedings.

After discussions with his legal team, Shankar has decided to put the Hindi remake of Anniyan on hold. Instead, the filmmaker is all set to work on the Velpari project.

Velpari will be a multi-lingual biggie

Sources say that the celluloid adaptation of Velpari will be made in multiple languages besides Tamil. Needless to say, following the recent trend, the film will be a pan-India project. Ranveer, who has frequently been visiting Chennai to discuss the film, is also likely to get a Tamil tutor and do extensive script-reading sessions to understand the subject in detail.

The scale of the project

Known for making mega, grand films (Shankar’s 2.0 was the most expensive Indian film to date), the filmmaker is planning to make the movie on Velpari with a budget that will exceed the Rajnikanth-Akshay Kumar starrer. Since the novel Velpari is based on one of the greatest Tamil kings, the film is expected to largely have actors from the Tamil industry.

On the lines of ‘Baahubali’ and ‘Ponniyin Selvan’

The movie version of Velpari will be on the lines of Baahubali and Ponniyin Selvan with grand war sequences. As king Velpari’s war with the Cheras, Chola, and Pandiya was one of the longest-fought wars in history, the action sequences will be on a par with international standards.

When will the shoot begin?

While Indian 2‘s shoot will be completely wrapped up in March and is slated for a Diwali 2023 release, Ram Charan’s film will have a theatrical release by June/July of 2023. Sources said the shooting for this film is likely to begin by mid-2024.

Ranveer Singh, it’s learnt, will complete all his pending works by 2023 and fully immerse himself in playing Velpari. Shankar has also demanded bulk dates from Ranveer so that the actor will not be shooting for any other film for one or two years until the director wraps up the biggie.

Shankar and AR Rahman have delivered many memorable albums, from Gentleman to 2.0. But for Indian 2, Anirudh Ravichander is compng the music, while Thaman is scoring the music for Ram Charan’s film.

Since it’s a period film, the buzz in the industry is that Shankar may prefer AR Rahman for his movie on Velpari. For more updates on Velpari, keep reading us!