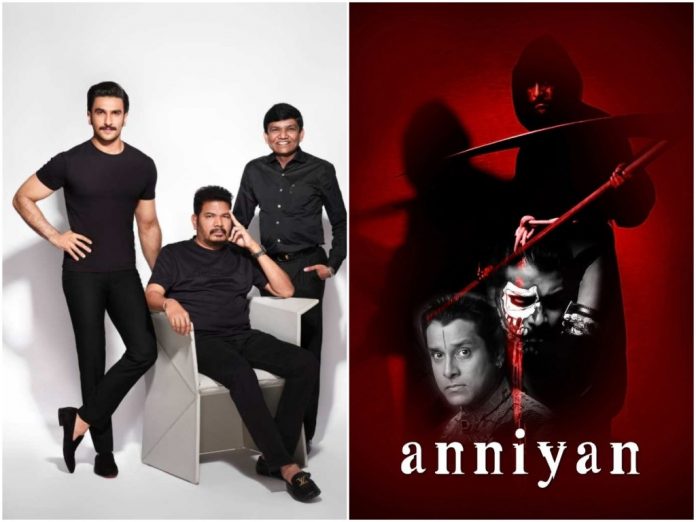 Well-known filmmaker Shankar’s grand Hindi remake of his hit film ‘Anniyan’ may have been stalled after running into legal hassles, but the ‘Robot’ director seems to be bouncing back with other mega plans lined up with Bollywood actor Ranveer Singh, said media reports on Monday (October 11).

According to a report in Bollywood Hungama, the “original makers” of the 2005 ‘Anniyan’, a film on a simple, decent man who turns into a crazed vigilante at night, have filed a case against Shankar after he had announced a Hindi remake with Ranveer Singh. Shankar is not letting this setback deter him and is already in talks with Ranveer and the female lead of the remake, Kiara Advani for another “big film”.

Shankar seems to have blocked bulk dates from the two stars since he is adamant to make a film together with this pair. The report added that Shankar has bounced off another idea to Ranveer and if the actor likes it, the filmmaker plans to start the film with the same cast at the same period they had fixed for the ‘Anniyan’ remake.

Like all Shankar films, it is to be expected to be executed on a “lavish scale” and will be an action entertainer with a strong message, said the report about the “hush-hush” project.

The Hindi remake of ‘Anniyan’ which was known as ‘Apirichit’ was announced a few months ago, amid a lot of fanfare. However, the day after Shankar had announced the project, V Ravichandran, who produced the original, was upset and asked Shankar to stop work on the remake with immediate effect

He had released a statement that Shankar and Jayantilal Gada cannot make the film without his consent since he owned the copyright of the film. No other person has the right over it as he was the author of the movie, Ravichandran had said. “Shankar can say and claim anything, but everyone knows that ‘Anniyan’ is my movie and I hired him to direct the film,” Ravichandran, had told ETimes, adding that he was shocked that a remake was being announced without his knowledge.

Meanwhile, Shankar is wrapping up his next pan India film starring Kiara and Ram Charan.

The director, who also has another film waiting in the wings to be completed, Kamal Haasan’s ‘Indian 2’, had picked Ranveer to play the role essayed by actor Vikram in the original ‘Anniyan’. According to Shankar, Ranveer Singh is a “one-in-a-generation actor who has shown us that he can immortalise a character through his stellar performance”.

‘Anniyan’ had also starred the likes of Sadha and Prakash Raj, and had music by Harris Jayaraj. It was a massive success and had even won a National Award for Special Effects, said a Hindu report.

Ranveer had also waxed eloquent about Shankar stating that he was blessed to get this opportunity to be a part of the “spectacular cinematic vision of Shankar sir”. Calling Shankar a “true disruptor” who had shown us that no vision is large enough to achieve on screen, he had dreamed of collaborating with him. “I have a strong feeling that we will create magic together. To lead a film like Anniyan is a dream come true for any artiste,” Singh had said at that time.